Source: DECR
Natalya Mihailova | 01 May 2015
On 29 April 2015, His Holiness Patriarch Kirill of Moscow and All Russia met with the head of the Armenian Catholic Church, Catholicos-Patriarch of Cilicia Nerses Bedros XIX. 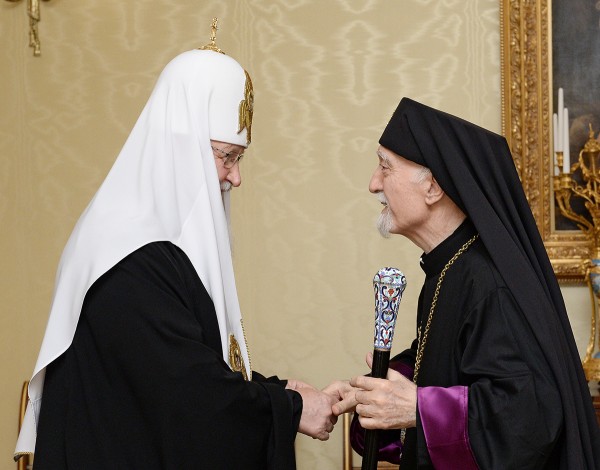 His Holiness Patriarch Kirill and Catholicos-Patriarch Nerses Bedros XIX greeted each other, saying ‘Christ is Risen!’

The head of the Armenian Catholic Church made a trip to Armenia and currently is visiting Russia. His visit was timed to the centennial of the Armenian genocide. The Primate of the Russian Orthodox Church said: ‘This date reminds us of the tragedy which the Armenian people survived in 1914-15, when over one million and a half of Armenians lost their lives. Such tragedies should not be wiped out from historical memory. If they are forgotten, they can be repeated.’ 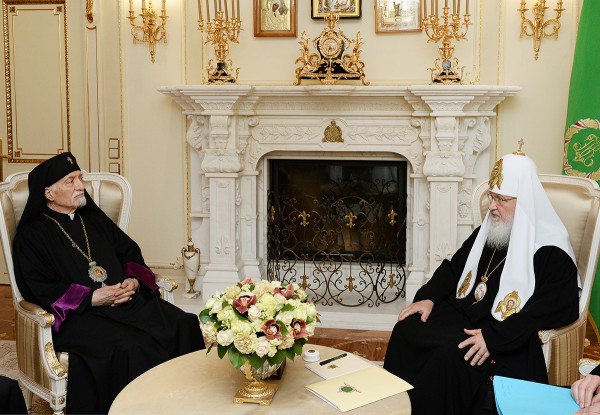 His Holiness added that Christians are running a terrible risk in the Middle East, North Africa and some other regions. They are being killed only because they are Christians. Speaking about the tragedy in Kessab, His Holiness noted that the Armenians had fallen victim to the extermination of peaceful population. He said, ‘We know about the suffering of our brothers in Iraq, Libya, Pakistan, and Nigeria. Forty-five churches in the Iraqi city of Mosul had been ruined, and Christians had been either killed, or ousted of the country.’

His Holiness underscored: ‘The tragedy of the Armenian people that happened a century ago makes us to comprehend that today it is also necessary to fight for human rights and religious freedom.

‘The Russians take the destiny of the Armenian people close to heart, as the history of our nations has been closely intertwined; therefore we feel solidarity, mutual love and support.’

His Holiness Patriarch Kirill noted that the Russian Orthodox Church had maintained good relations with the Armenian Apostolic Church and with the Catholic Patriarchate of Cilicia. He wished Catholicos-Patriarch Nerses Bedros XIX God’s help in his labours and said: ‘I happened to visit Lebanon and meet with the Catholic Patriarchs. We talked about the hard situation of Christians in the Middle East, and I expressed concern of the Russian Church over the fact of Christians’ leaving the region. We must work together for the sake of Christians in the Middle East and elsewhere in the world.’

His Holiness Kirill is convinced that current events are an extra incentive for the development of relations among Christians of different nationalities and of common action in defence of their rights.

The head of the Armenian Catholic Church expressed solidarity with position of the Russian Orthodox Church on the situation in the Middle East and in other regions.

He spoke about his participation in the commemorative events and added: ‘If we do not cooperate and work together, the tragedies like the Armenian genocide will continue in the entire world, especially in the Middle East.’

Catholicos-Patriarch Nerses Bedros XIX also spoke about the great sacrifice of the Armenians, Russians and other people in the 20th century, and about people who are giving their lives for Christ.