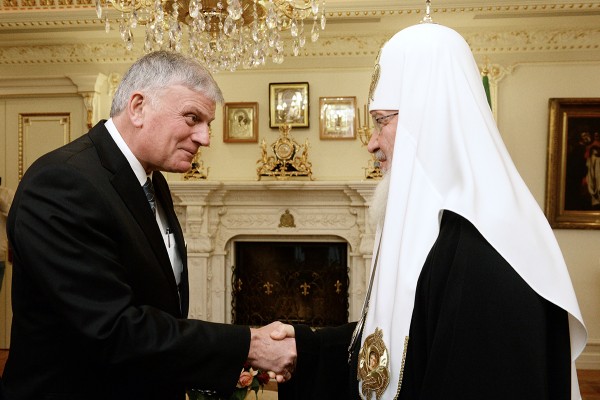 They were joined in the meeting hat took place at the Patriarchal and Synodal residence in St. Daniel’s Monastery in Moscow, by Mr. Viktor Hamm, Vice President of the Association, and archimandrite Philaret (Bulekov), vice-chairman of the Moscow Patriarchate’s Department for External Church Relations.

His Holiness Patriarch Kirill noted that the founder of the Evangelistic Association, the Rev. Dr. Billy Graham had visited Moscow several times, even in the Soviet period in the 1950s and in the 80s, when he addressed Orthodox worshippers in the Yelokhovo Cathedral of the Epiphany.

“There were many missionaries of different kind, including those from Western countries, in the early 90s here. They were seeking to convert the Orthodox into their faith, and we were in anxiety about our relations with Western Christians. I recall a meeting of my predecessor, Patriarch Alexy II, with your father, – the primate of the Russian Orthodox Church said, addressing the guest. Patriarch Alexy II told him about a difficult situation in Russia and about hard feelings which our Church experienced because of the behaviour of these false brothers. And your father said that the Billy Graham Association would never go along this way but will develop relations with the Russian Orthodox Church. This promise has been fulfilled.”

His Holiness Patriarch Kirill noted with appreciation good relations between the Russian Orthodox Church and the Billy Graham Evangelistic Association, mentioning with gratitude common work for supplying humanitarian assistance to the refugees from Ukraine.

His Holiness touched upon a topic of spiritual foundations of modern Western civilization. “The Russian Orthodox Church was active in developing relations with Western Christians even during the ‘cold war.’ We lived in hard conditions in the state in which the atheistic ideology was dominant and thought that Western civilization was Christian. We highly appreciated the freedom of Christian Churches in the West and their influence on public life. For us, Western Christians were like brothers and sisters. They were our allies.

“I believe that through our joint efforts we managed to exert influence on the change of political climate in relations of the Soviet Union with the West. Our relations were based on the understanding of our belonging to one and the same Christian civilization and our confession of common Christian moral values.”

However, – the Primate of the Russian Orthodox Church said with regret, – spiritual and religious life in the West has undergone radical changes in the recent years. Western civilization and Western countries ceased to indentify themselves with Christian tradition and adopted an idea of society in which Christian moral values should not be dominant. And then, legislative solutions were taken in many countries, the United States of America including, which allow same-sex marriage, equaling it to natural marriage that the Lord has given us in commandment. People who do not want to abide by these solutions may be subjected to repressions. Today, Christians who uphold the intransient importance of Christian moral values had to become confessors of the faith living under various kind of pressure, on the part of mass media including.”

His Holiness Patriarch Kirill noted that the Billy Graham Evangelistic Association courageously confessed its faith and defended Christian values. “This gives us a sign of hope: there are people among Western Christians akin to us in ethic principles, sharing them with the Russian Orthodox Church,” His Holiness said and reminded his listeners that the Moscow Patriarchate had suspended any contacts and dialogue with Christian Churches and communities which perform same-sex marriages in church and even ordain people of non-traditional sexual orientation as priests and bishops. For instance, we had to break off contacts with the Episcopal Church in the USA, but we support the Anglican Church in North America which remains faithful to Christian ethics. I would like to note once again the role played by the conservative evangelicals in the United States as their position gives us an opportunity to continue our dialogue with Christians in America.”

His Holiness Patriarch Kirill expressed his support to the guest in his courageous stand for the Gospel truth.

William Franklin Graham conveyed greetings from his gather, the Rev. Dr. Billy Graham, to the Primate of the Russian Orthodox Church and said that it was a privilege for him to meet with His Holiness and thanked him for raising his voice for the truth in the world which experiences moral hardship.

He added that it important to work together supporting Christians throughout the world who stand for the truth.

Franklin Graham expressed his particular concern over persecution of Christians in different regions of the world, especially in the Middle East.

As to other aspects of international cooperation, Franklin Graham mentioned the necessity of common efforts in rendering help to the refugees from Syria and Afghanistan in Europe like the help given to the refugees from Ukraine to Russia. The guests told His Holiness about the Association’s work with the youth and children, about social ministry and Christian education and expressed his hope for cooperation with the Russian Orthodox Church in different fields of action.

Franklin Graham expresses his gratitude to the Russian Orthodox Church and her Primate and said that he had prayed to God to keep His Holiness and give him strength to uphold moral positions and the truth of God’s word in the rapidly changing world.