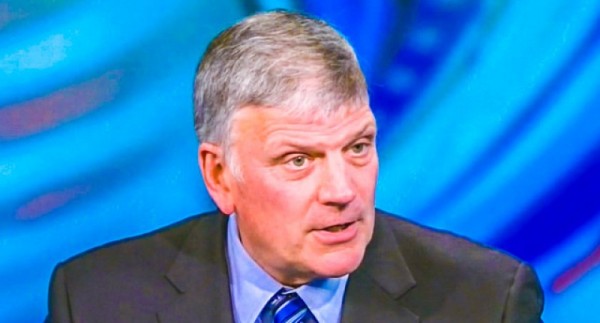 In an interview with the Moskoviskij Komsomolets newspaper, Graham criticized President Obama for supporting “policies that contradict the teachings of God” andrepeated his praise of Putin for “protecting Russian young people against homosexual propaganda,” adding that “homosexuals cannot have children, they can take other people’s children,” according to a transcript the newspaper provided of the interview:

I heard that you called Barack Obama ‘the leader of the antichrist movement.’ Is that true? What do you think about the current president of the United States?

I have met the president on several occasions. He’s a very nice person. But he supports and promotes policies that contradict the teachings of God. As a Christian I believe that abortion is murder, he supports it. Homosexuality and same-sex marriage — those are sins against God, and the president is promoting them. I’m not against homosexuals as people. But God commanded that marriage should be between a man and a woman. And I very much appreciate that President Putin is protecting Russian young people against homosexual propaganda. If only to give them the opportunity to grow up and make a decision for themselves. Again, homosexuals cannot have children, they can take other people’s children. I believe that President Obama (and I’ll repeat, he’s a very nice person) is leading America down the wrong road. He’s taking a stand against God.

In the same interview, Graham reportedly hailed Putin for his actions in Syria, where Russia has been targeting rebels supported by the U.S. and largely ignoring ISIS, saying, “I think that Russia’s involvement in this situation will bring about a political solution to the crisis.”

Graham echoed the messaging of Putin, who as the Washington Post notes, “has anchored his political brand in religious nationalism, centered on the Russian Orthodox Church,” telling the paper that as Americans have been “losing many religious freedoms,” there have been “positive changes” in that area in Russia.

[T]he situation in the US regarding religion is in decline. Secularism, which is almost no different from communism, is an atheistic movement. Our country is becoming more and more secular, more atheist, taking God out of government, taking God out of schools. We are witnessing America losing many religious freedoms. In your country over the past 30 years, we have seen positive changes. But over this same period of time in the US, the changes have been negative.

In a meeting with Patriarch Kirill, the leader of the Russian Orthodox Church, which was widely reported in the Russian news media, Graham reportedly told the Orthodox primate: “When I was a young man, we worried that the world would become atheist under the influence of communism, but while communism fell, atheism didn’t go anywhere. Unfortunately my own president promotes atheism … I spoke about this with President Obama, but he did not understand. Unfortunately he does not have a Christian worldview.”

According to another report, Graham told Patriarch Kirill, “Many churches in America have started to support homosexuality. This is terrible, it’s a sin and it’s against God.”

“I call for prayers for the president of Russia, who is protecting traditional Christianity,”Graham reportedly said.

Graham took part in a forum on “religion and peace” with a number of religious leaders, and Graham and Patriarch Kirill announced their plans to organize an international conference on Christian persecution in the Middle East.