His Holiness Patriarch Kirill officiates at the IFUOCN-2016 award ceremony

Source: DECR
Natalya Mihailova | 11 March 2016
On 9 March 2016, His Holiness Patriarch Kirill of Moscow and All Russia officiated at the 16th annual ceremony of awarding the prize of the International Foundation for the Unity of Orthodox Christian Nations (IFUOCN) “For the Outstanding Activity in Strengthening Unity of Orthodox Christian Nations and for Consolidation and Promotion of Christian Values in the Life of Society” named after His Holiness Patriarch Alexy II. The ceremony took place in the Hall of Church Councils of the Cathedral of Christ the Saviour. 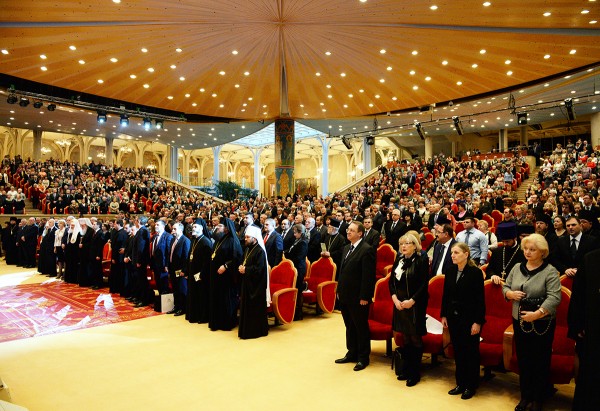 Prizes were awarded to His Holiness Patriarch Neofit of Bulgaria; President Tomislav Nicolić of the Republic of Serbia; and Mr. Sergei Naryshkin, chairman of the State Duma of the Federal Assembly of the Russian Federation. 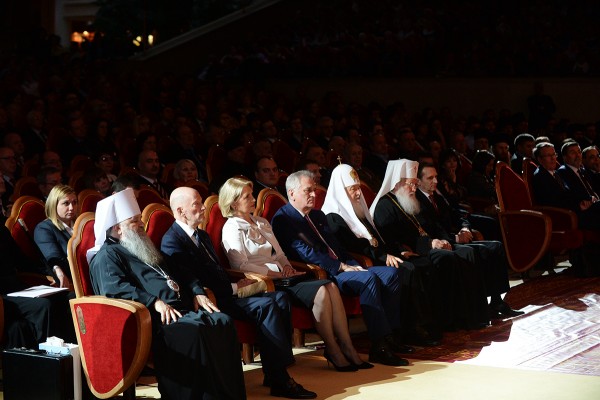 Before the ceremony, the Primate of the Russian Orthodox Church met with President Nicolić at the Patriarchal Chambers in the Cathedral of Christ the Saviour and later had a talk with Patriarch Neofit of Bulgaria and with Mr. Naryshkin.

After that His Holiness Patriarch Kirill, the prize-winners and other participants in the ceremony proceeded to the Hall of Church Councils. His Holiness blessed the beginning of the ceremony.

A documentary film about the IFUOCN activity was shown before the ceremony; the IFUOCN president, Prof. Valery Alexeyev, delivered an opening speech and asked His Holiness Patriarch Kirill of Moscow and All Russia to open the award ceremony.

The ceremony was concluded with a concert in honour of the prize-winners.