Source: DECR
Natalya Mihailova | 19 February 2015
His Holiness Patriarch Kirill of Moscow and All Russia sent condolences to the President of the Arab Republic of Egypt, Mr. Abdel Fattah el-Sisi, and His Holiness Patriarch Tawadros II over the murder of over twenty Coptic Christians in Libya.

Please, accept my deep condolences over the atrocious murder of Coptic Christians, Egyptian citizens, in Libya.

The crime committed by extremists deserves everyone’s condemnation. Radicals’ attempts to justify violence by religious motives provoke utter rejection. Following the path of terror, these devil’s servants try to disrupt the balance, maintained for centuries, of good neighborly relations between Christians and Muslims in the Middle East.

I am convinced that the tragedy that has befallen the Egyptian people will leave nobody indifferent. A priority task of the whole world community today is to combine the efforts to oppose the inhuman ideology and give a resolute rebuff to this evil. Terrorism has no future, because people will never put up with violence, no matter what slogans it might use as a cover.

I offer my condolences to the relatives and friends of those killed, I prayerfully empathize with all Egyptian people and wish them fortitude and spiritual strength in opposing extremism and terrorism.

With respect and condolences, 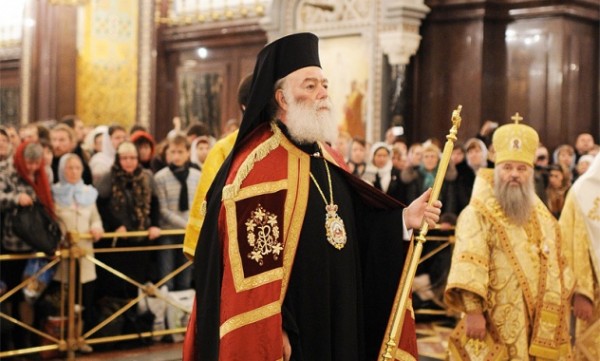 Pope of Alexandria and

Patriarch of the See of St Mark

in All Africa and the Middle East

With deep pain in my heart I have learnt about the terrible murder of over twenty Christians of your flock in Libya.

No goal can justify this horrible crime. Using religious rhetoric as a cover, extremists commit atrocities unprecedented in their cruelty, seeking to sow panic in people’s hearts and to bring a split into the good relations between Christians and Muslims, which prevailed in the Middle East for centuries.

It is my conviction that it is especially important today for the whole world community to unite and undertake most resolute actions to oppose extremism and terrorism. We as Christians should together bear witness to the Risen Lord Jesus Who has conquered evil and death. Then futile will be all attempts of those who serve the devil using the holy name of God to justify their criminal actions.

In this grave hour, I stand in prayer with the Egyptian people. My sincere condolences go to your Holiness, the clergy and flock of the Coptic Church, and the relatives and love ones of those who were killed. May the Lord give rest to the souls of the deceased in the dwellings of the righteous.