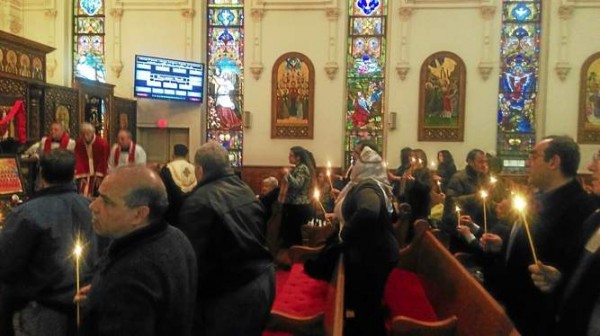 The 21 Coptic Martyrs of Libya were celebrated for their “love for Christ, their courage against the enemy, their patience against oppression, and their victory over death” during a solemn ceremony that inducted them into the Choirs of the Saints.

With clergy from other churches in the area joining Bishop Karas, the Papal Exarch for North America and the Rev. Mina Shaheid of St. George in presiding over the traditional funeral service, the pews were filled with parishioners and non-parishioners alike for a somber mid-afternoon, candlelit service.

“We organized this to celebrate the lives of the martyrs, who will join other martyrs throughout the age of martyrdom, whether it was St. George or other martyrs, and they earn that status now,” explained Shaheid. “This is a type of funeral service for us but we don’t usually have them with multiple people presiding.”

As noted on the church’s website, “Such atrocities are not new to the Coptic Church and have existed since the inception of Christianity in Egypt in the early first century. Saint Mark the Apostle was the first martyr in the land of Egypt and his blood saturated its grounds as he was dragged by horses throughout its streets until his death. The Coptic Orthodox Church is known as the Church of the Martyrs and Her God is the God of the living and not of the dead. Christian martyrs convey the greatest symbol of love and offer to Christ the ultimate sacrifice. They are an exemplification of Biblical commands. Our Lord Jesus Christ states, ‘Greater love has no man than this, that a man lay down his life for his loved ones’ (John 15:13).”

In a memorial tribute, the Coptic Orthodox Church condemned “the slaughter of the Christians in Libya, Syria, Iraq and their surrounding regions and rejects the killings of Christians and non-Christians worldwide by ISIS and other Islamic extremists. We entreat God to show mercy upon His creation and to remove the hatred and animosity from the hearts of all people. We offer our prayers for the families of the martyrs and ask God to grant them peace of heart and His heavenly consolation.”

The names of the martyrs will be entered into the Church's calendar, Pope Tawadros II has…