Source: DECR
Natalya Mihailova | 29 December 2016
On 26 December 2016, His Holiness Patriarch Irinej of Serbia visited the Cathedral of the Holy Trinity – Metochion of the Russian Orthodox Church in Belgrade. 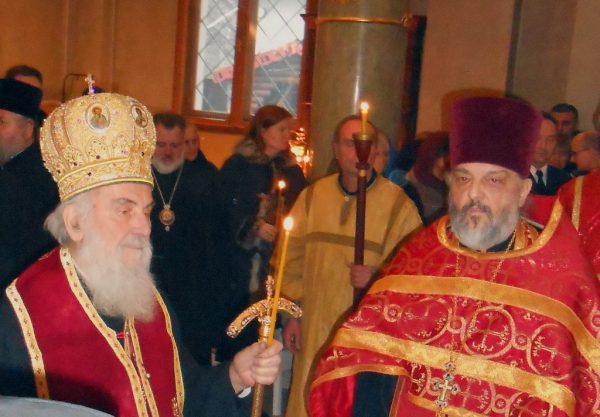 His Holiness celebrated the requiem service for those who had died on board the Russian Defense Ministry Tu-154 aircraft. The tragedy occurred near the city of Sochi on December 25. Concelebrating with the Primate of the Serbian Orthodox Church were the rector of the Metochion, archpriest Vitaly Tarasiev, and the Belgrade clergy.

Among those praying in the church were Bishop Nazary of Kronstadt, vicar of the St. Petersburg diocese, who is currently on pilgrimage in Serbia; Mr. Alexander Chepurin, Russia’s Ambassador to Serbia; Mr. Vladimir Chushev, Ambassador of Belarus to Serbia; Ms Nadezhda Kuschenkova, director of the Russian House in Belgrade; representatives of the Serbian Ministry of Defense; and parishioners of the Russian Metochion.

His Holiness mentioned the artists of the Alexandrov Ensemble who had also died in the plane crash. As the Primate of the Serbian Church noted, “since its foundation the Ensemble has been bringing beauty and joy into the lives of those who had an opportunity to hear it perform.”

Patriarch Irinej called upon all those present to pray for the repose of the souls of the victims, saying, “They deserve our human gratitude and God’s mercy. May the Lord give rest to their souls in the dwellings of the righteous and grant consolation to the families of the victims in their great sorrow.”

Most viewed articles
What Does Asceticism Look Like?169
Be Bearers of Light104
Orthodox Chapel to Be Constructed in Campina das Missoes75
Report: 5.2 Billion People Face ‘Very Severe Violations of Religious Freedom’73
Metropolitan Mark of Ryazan Explains Why People Sometimes Don’t Know What to Repent of73
The Meekness of God64
Ukrainian Church Calls for De-Escalation of the Conflict in Donbass63
Archbishop of Australia Attends Commemorative Events for Battle of Crete in Melbourne39
Priest Killed for Serving in Romanian to be Honoured with Bust in Albania29
Most popular authors
Pravmir.com team323
Archpriest Michael Gillis169
Metropolitan George (Khodr) of Mount Lebanon104
Archpriest Stephen Freeman64
Aurelian Iftimiu29