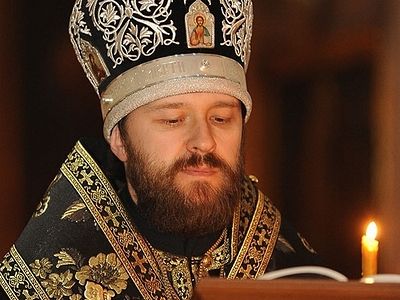 That same day the DECR chairman and those accompanying him on his pilgrimage visited the Zeitelink Allied Military Cemetery. Buried there are more than 25 thousand soldiers from Serbia, France, Great Britain, Italy and other countries, including 400 Russian soldiers and officers, who had fallen in battles on the Macedonian front during the First World War. Metropolitan Hilarion celebrated a litiya at the memorial to the Russian soldiers.

After the service Metropolitan Hilarion addressed those present, saying:

“Your Eminence, dear Fathers and Brothers,

“We have prayerfully commemorated the commanders and soldiers who laid down their lives for faith and homeland: not only for our Russian homeland, but also for the land of Greece, sacred for all of us. Like many other lands, it is ensanguined with the blood of our Russian soldiers – here they fought for the freedom of this country, for the freedom of the Greek people. And the present generations of the Russians, Ukrainians, Belarusians and Greeks – of all those who fought in this land – are grateful for their heroic deeds. We are praying that the Lord give rest to their souls and forgive their sins. We are also lifting up our prayers, so that the tragedy of war would never occur again, that politicians would draw a lesson from the terrible tragedies of the past, and so that peace would reign throughout the world and our young people would not have to give their lives and shed their blood.

“Memory eternal be to all those fallen, those buried at this cemetery. May the Lord preserve our countries and our peoples in peace and welfare.”

Later that day Metropolitan Hilarion of Volokolamsk visited the Metropolis of Neapolis of the Greek Orthodox Church, located in the western part of Thessaloniki. The DECR chairman was warmly welcomed by Metropolitan Varnavas of Neapolis and Stavroupolis, who told him about the activities of his diocese, including its social and charitable projects.