His Holiness Patriarch Kirill meets with the Grand Mufti of Syria 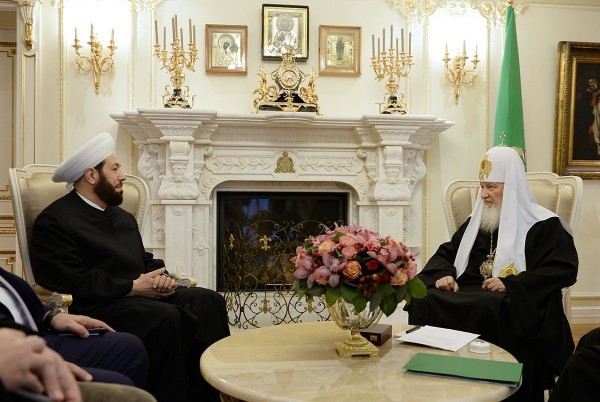 They were joined in the meeting, which took place at the Patriarchal and Synodal residence in St. Daniel’s Monastery, by H.E. Riad Haddam, Ambassador Extraordinary and Plenipotentiary of Syria to Russia; Mr. Inayatolla Hassoun, the Grand Mufti’s son, interpreter Nofal Kaltum, and archimandrite Philaret (Bulekov), vice-chairman of the Moscow Patriarchate’s Department for External Church Relations.

The Primate of the Russian Orthodox Church warmly greeted the high guest and reminded him of their last meeting in Damascus in 2011.

‘You are a bright representative of the heroic Syrian people. You and your family have passed through the tragedy of terrorism and radicalism, and your calls to peace an cessation of civil confrontation sound very convincing, ‘ His Holiness underscored and continued to state that the position of the Russian Orthodox Church and the Russian Federation on the crisis in Syria has not changed.

‘Peaceful life in Syria has been interrupted through the intervention of the external forces which supported all who wanted to wage struggle against the government, including the most radical force, which has become very dangerous and is now known as the ISIL. It is ruining people’s life in Syria and Iraq and poses a real threat to peace in the region. The position of Syria as a state and the position of the Syrian people who still fight for their independence are very important. We support your people.’

His Holiness said that the situation in Syria and Iraq had become a great tragedy for Christian in these countries. He noted that both Christians and Muslim suffer from the acts of extremists and added: ‘As Christians are in minority, the Christian presence in the Middle East can be ended, which will be a civilizational catastrophe.

‘I recall the life of Syria before the war. We respect the experience of this country in constructing relations between Christians and Muslims and between different branches of Islam.

‘You as a spiritual leader of the Syrian people have done a lot for Syria so that it could continue its policy of interreligious peace. We express solidarity with your mission and with the Syrian people and do hope for the end of the war in the near future and for the establishment of a lasting and just peace,’ the Primate of the Russian Orthodox Church said.

The Grand Mufti of Syria said to the Patriarch that he was happy to meet him again and mentioned that their first meeting took place at the World Summit of Religious Leaders in Moscow in 2006.

He believes that the convocation of this forum was very important as the ever new hotbeds of hatred and confrontation appear in different corners of the globe.

Sheikh Ahmad Badreddin Hassoun brought greetings to His Holiness from the President of Syria, Bashar Assad, and added that the people of Syria also conveyed their greetings. They are thankful for ‘the humanitarian aid sent by your Church and the Imperial Orthodox Palestine Society. The Syrians appreciated the fact that the aid was sent to the Primate of the Orthodox Church of Antioch and the Grand Mufti of Syria to be distributed among the needy.’

Sheikh Hassoun said that Muslims and Christians were citizens who enjoy full rights in Syria and called the actions of those using religious and national problems for spreading division and tension in the country destructive.