Source: Interfax-religion
Natalya Mihailova | 06 December 2016
Paris, December 5, Interfax - Patriarch Kirill of Moscow and All Russia and French President Francois Hollande have discussed the protection of Christians in the Middle East and peacekeeping efforts in Ukraine at their meeting in Paris. 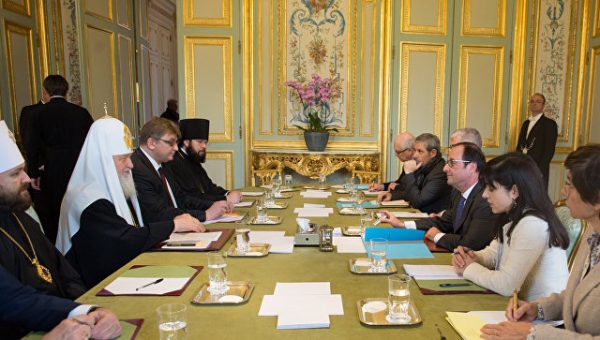 “Human fates and human lives, these are the main thing. This is precisely what we talked about with Pope Francis in Havana. The Russian Church is ready to cooperate with all parties interested in the cause of protecting the Christian presence in the Middle East,” Patriarch Kirill said at the meeting on Monday.

As for the conflict in Ukraine, the Russian Orthodox Church’s position from the start has been different from that of several other religious communities in Ukraine, the patriarch said.

“In our view, peacekeeping by the church is the only mechanism that can now reconcile people in Ukraine. And in this sense, the peacekeeping mission of the Ukrainian Orthodox Church plays a special role,” Patriarch Kirill said.

He thanked Hollande for allowing the construction of the Russian Trinity Church and the Russian spiritual and cultural center on Branly Embankment in central Paris. This place will serve as a platform for developing spiritual and humanitarian initiatives between France and Russia, the patriarch said.

For his part, Hollande said that France supports the Christian minority in Iraq and Syria and welcomes all, including religious, initiatives on how to resolve the situation in the Middle East.

With regard to the Ukrainian conflict, the French president said implementing the Minsk agreements is important.

He also welcomed February’s meeting between Patriarch Kirill and Pope Francis in Havana and the consecration last Sunday of the Russian spiritual and cultural center which opened in Paris in October as part of the development of cultural initiatives between France and Russia.

At a meeting with the Catholic Archbishop of Paris Cardinal Andre Vingt-Trois later on Monday, Patriarch Kirill spoke highly of his conversation with Hollande.

“We had a good conversation with the president of France, Francois Hollande. We discussed important modern day issues […]. I think an opportunity to meet with the French president, the man who leads a secular republic, a secular state – it is a good signal that secular government is open to discussion with Church representatives of acute problems of the day that we all worry about,” Patriarch Kirill said at the meeting at the Roman Catholic Archdiocese of Paris.

Cardinal Vingt-Trois noted that he often meets with the president to discuss important matters.

“This is the man who listens, and listens sympathetically,” Vingt-Trois said of the president, but, he added, no one knows whether this dialogue will lead to concrete results.

Most viewed articles
The Tangled Web98
Love Endures When All Else Fails70
The Joy of Giving and Serving Others70
His Beatitude Patriarch Theophilos III of Jerusalem and All Palestine visits Russian Gethsemane67
Patriarch Daniel: The Tabor Light, perceived by the Hesychasts, is sought by every Christian enlightened at baptism56
Church Damaged during WWII Restored in Serbia44
First Virtual Museum of Roma Holocaust in Romania, Created by MNIR37
Restoring Our Humanity Through the Eucharist9
Most popular authors
Pravmir.com team111
Archpriest Stephen Freeman98
Aurelian Iftimiu93
Priest Luke A. Veronis70
Archpriest Basil Ross Aden70
Fr. Gabriel Bilas9