Source: Interfax-religion
Natalya Mihailova | 07 December 2016
Sainte-Genevieve-des-Bois, December 6, Interfax - During his visit to France, Patriarch Kirill of Moscow and All Russia prayed for the healing of "the wounds on the body of Russian immigration" and the final overcoming of separation of the Russian people generated by the revolution and the Russian Civil War in the 20th century. 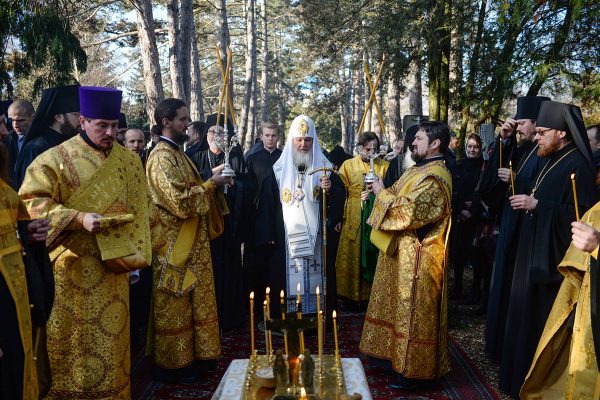 “Our prayers today are for the lives of our people to become better in a spiritual and material sense for all wounds from separations of the 20th century, including the wounds, which somehow still remain on the body of Russian immigration, to heal finally,” he said when visiting the Russian section of the Sainte-Genevieve-des-Bois Cemetery outside Paris.

Outstanding figures of Russian immigration are buried in this cemetery, among them Russian philosopher and priest Sergius Bulgakov, writers Ivan Bunin and Ivan Shmelyov, head of the provisional government Prince Georgy Lvov, Lt. Gen. Nikolai Lokhvitsky and film director Andrei Tarkovsky. The first burials in the Russian part of the cemetery, which is still active, date back to 1927. There are over 5,000 graves in which about 15,000 Russians are buried, at the Sainte-Genevieve-des-Bois Cemetery.

At the Sainte-Genevieve-des-Bois Russian Cemetery Patriarch Kirill performed a lity, a brief memorial service, during which he also prayed for the victims of a road accident in the Khanty-Mansiisk Autonomous District to rest in peace.

The patriarch laid flowers on the graves of notable figures of Russian immigration, such as Sergius Bulgakov, Leonid Ouspensky, Nikita Struve, and Anton Kartashev.

“One particularly realizes the need for spiritual unity of Russians abroad while visiting this holy place,” he said.

Patriarch Kirill started his primatial visit to the Diocese of Korsun uniting the parishes of the Russian Orthodox Christian Church in France, Spain, Portugal and Switzerland with an all-night vigil in a small ancient Russian church in Rue Petel in Paris on December 3. During his visit, which ends on December 7, the patriarch will visit not only Paris, but also Switzerland’s Zurich, where he will lead the clerical celebrations on the occasion of the 80th anniversary of the Church of Resurrection.