Holy Fire appears at Church of the Holy Sepulcher in Jerusalem

Source: Voice of Russia
The Holy Fire appeared on Saturday at the Church of the Holy Sepulcher in Jerusalem while thousands of Orthodox Christian worshippers were waiting for the miracle to come.
Natalya Mihailova | 19 April 2014 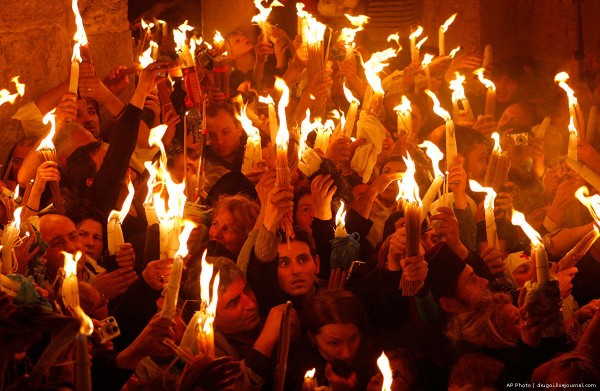 For Orthodox believers, the Holy Fire ritual is seen as a miracle that precedes Easter, Christianity’s most important and joyful holiday when the Church commemorates the Resurrection of Jesus Christ.

The Holy Fire has been descending in the Holy Sepulcher Church, in a small chapel called Kuvuklia, for more than one millennium.

The famous Church Father St. Gregory of Nyssa is believed to be one of the first to mention the miracle back in the 4th century.

The church service of the Holy Fire begins about 24 hours before the Orthodox Easter begins. This year it coincides with the Easter celebrations of other Christian confessions.

Traditionally at 10-11 a.m. on Holy Saturday the Orthodox Patriarch of Jerusalem clad in inner-rason brings a big icon lamp where the Holy Fire is expected to descend and 33 candles – the number of the years of Christ’s earthly life.

After a series of rituals, the priest stops near the entrance to the chapel. His chasuble is taken off, and he is left wearing the linen chimer only for everyone to see that he is not taking any matches or other fire-making devices with him.

The Patriarch goes inside, and the doors behind him are sealed with a big piece of wax and a red ribbon.

Then light is switched off in the church and anticipatory silence follows as believers pray, confess their sins and ask God to grant them the Holy Fire.

When the Holy Fire finally descends, then the doors of Kuvuklia open and the Patriarch comes out to bless the believers and gives them the fire.

A group of pilgrims will deliver late on Saturday the Holy Fire from Jerusalem to the central Russian cathedral.

A special flight is expected to land in Moscow, where the Holy Fire will be traditionally greeted by hundreds of Russian believers.

From Moscow the Holy Fire, which pilgrims say does not burn in the first minutes after it has been lit, is “distributed” among churches in containers similar to those used to transport the Olympic flame.

The Holy Fire is brought to Russia from Israel every year since 2003. This year it will be taken for the first time to Crimea, a former Ukrainian region that became a part of Russia last month.

Every Orthodox church in Russia holds Paschal liturgies on the night of Holy Saturday that last well into Easter morning. Patriarch Kirill of Moscow and All Russia, who heads the Russian Orthodox Church, will lead the divine service in downtown Moscow’s Christ the Savior Cathedral, traditionally attended by top Russian officials.

Preparation for Easter celebrations begins in the Russian Orthodox Church on Holy Saturday – the last day of Holy Week, also known in Russia as Passion Week.

On that day, people come to churches in great numbers to have paschal cakes and eggs blessed by priests. In Eastern Christianity, the Holy Saturday is the mournful day on which Christians bewail the Jesus Christ, who died on the cross on Good Friday.

At midnight, the solemn festive procession with crosses and icons starts, with priests and believers going around the church and glorifying the Resurrection.

The procession is often attended by nonbelievers attracted by its splendor. The service lasts into the early hours of Sunday.

The Resurrection of the Savior symbolizes his victory over sin and death and the birth of a new world redeemed by his Passion.

This year, it is marked by the Eastern Orthodox and Catholic churches on the same day, which sometimes happens although the churches use different calendars.

Easter is preceded by a long period of fasting. The fasting period before Easter in Eastern Christianity lasts 48 days.

The first 40 days of the period are called Great Lent, symbolizing Jesus spending 40 days in the wilderness before being tempted by Satan. In the Orthodox tradition, all days are included into the day count.

The 40 days are followed by Lazarus Saturday, commemorating Jesus raising Lazarus of Bethany from the dead, and Palm Sunday, when Jesus entered Jerusalem, and then by Holy Week, the last week of the fasting period.

Holy Week lasts until Easter Sunday but does not include it. During those 48 days, believers abstain from meat, fish, eggs and dairy products and spend time in prayer.

The true purpose of fasting is to help people cleanse their souls of sin and learn to control their desires. In this way believers prepare for Easter.

This way of counting makes the number of days from the start of the fast until its end exactly 40. Russia’s Easter traditions include painting and coloring eggs – normally red as a symbol of the blood of Christ – and cracking them.

The tradition of giving each other paschal eggs dates back to the first century A.D. Many Russians on Easter Sunday visit the graves of loved ones, a tradition not welcomed by the Church, which has special days to commemorate the dead and says Easter is a time of joy rather than sad reflection.