Holy Myrrh-Streaming Iveron Icon of Hawaii in Phoenix This Weekend

Source: The Arab Daily News
Natalya Mihailova | 27 August 2014
The Holy Myrrh-Streaming Iveron Icon of Hawaii will be on display August 30th through September 1stat St. George Antiochian Orthodox Church in Phoenix, Arizona. This event is open to the public. 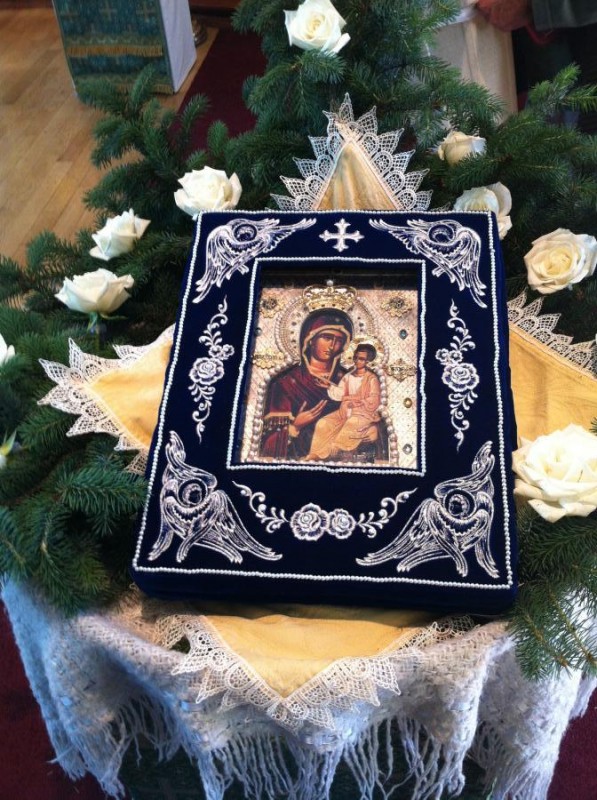 Photo: The Diocese of Alaska

The Icon features an image of the Holy Theotokos (Virgin Mary) and the Christ Child.  For unexplainable reasons, drops of myrrh emanate from the Icon. The Icon is actually a smaller reproduction of the original Iveron Icon that resides in Greece and also produces myrrh.

In June of 2008, the “Hawaiian” Myrrh-streaming Iveron Icon was officially recognized by the Russian Orthodox Church Outside Russia as miraculous and worthy of veneration.  The Icon has been connected to several miracles including the healing of a brain tumor in a young girl and the return of sight to a young man who suffered from 90% blindness as the consequence of a football injury.

The Icon officially resides at Holy Theotokos of Iveron Russian Orthodox Church in Honolulu, Hawaii but travels regularly.  Since 2008, the Icon has visited over 1000 churches and been venerated by an estimated one million people.

St. George was established in the Valley for over 60 years ago. It is one of only two Antiochian Orthodox churches in the Greater Phoenix Area and part of the Antiochian Orthodox Christian Archdiocese of North America. Sometimes called the Eastern Orthodox Church, the Orthodox Church can be traced in unbroken continuity all the way back to Christ. The Church of Antioch was established by the Apostles Peter and Paul and is one of the five ancient Patriarchates of the Christian Church, along with Alexandria, Constantinople, Jerusalem, and Rome.

Information About The Visit of The Holy Myrrh-Streaming Iveron Icon of Hawaii: