Source: DECR
Natalya Mihailova | 15 July 2016
On 15 July 2016, the Holy Synod of the Russian Orthodox Church began its session at the Patriarchal and Synodal residence in St Daniel’s Monastery under the chairmanship of His Holiness Patriarch Kirill of Moscow and All Russia. 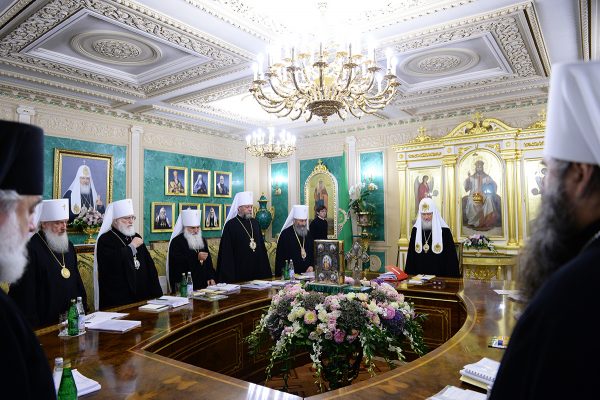 Addressing the members of the Synod, the Primate of the Russian Orthodox Church spoke on terrorism following the tragedy that had occurred in Nice the day before.

“These reflections must be accompanied by prayer,” Patriarch Kirill continued, “We can only define what terrorism is in the light of religious understanding of the today’s state of mankind. I believe that we have to arrive at the genuine, ontological understanding of the phenomenon of terrorism.”

At the suggestion of His Holiness, the members of the Holy Synod paid tribute to the victims of the terrorist attack by observing a minute of silence.

Invited to take part in the summer session (March-August) are Metropolitan Dimitry of Tobolsk and Tyumen; Metropolitan Georgy of Nizhny Novgorod and Arzamas; Metropolitan Mitrofan of Gorlovka and Slavyansk; Archbishop Gabriel of Montreal and Canada; and Bishop Alexander of Daugavpils and Rezekne.