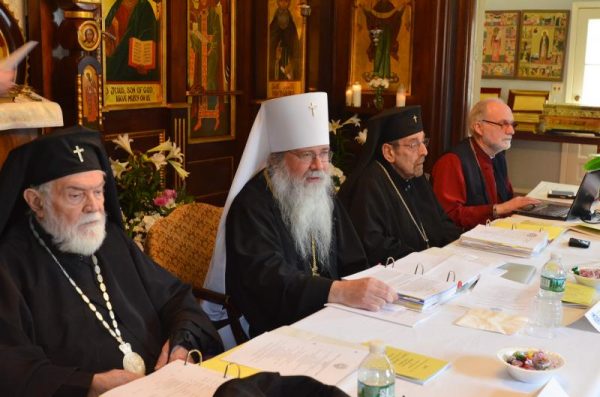 Metropolitan Tikhon chairs the Spring Session of the Holy Synod.

At the conclusion of the Divine Liturgy, Metropolitan Tikhon welcomed the members of the Holy Synod.

“I welcome all of the brothers of our Holy Synod, as well as all those who are participating with us this week, to the Spring Session of our Holy Synod of Bishops of the Orthodox Church in America,” Metropolitan Tikhon said.  “The opening of our session this week with the Divine Liturgy is our opportunity to give thanks to almighty God for the gift of unity and brotherly love that exists within our Holy Synod, and we ask that the Holy Spirit will guide us in our deliberations and decisions this week.”

At the opening session, Metropolitan Tikhon reviewed the agenda’s priorities, chief among them being preparations for the 19th All-American Council.  He went on to reflect on his participation in recent events commemorating the 50th anniversary of the assassination of the Rev. Dr Martin Luther King in Washington, DC.

“As is well known, Dr. Martin Luther King was assassinated in Memphis, having traveled there to support the sanitation workers during their strike,” Metropolitan Tikhon said.  “The prayer which I prepared for this anniversary celebration took as its refrain the words and signs used by those sanitation workers to express their grievances.  These were four simple words: ‘I am a man!’  These words spoke clearly of the desire of human beings to be accepted as human beings by others, which not only encapsulates the struggle of the civil rights movement, but also speaks in a very direct way to the goal of the incarnation and the economy of Christ, which is for all human beings to find healing in Christ and to become truly human, to become a man in the image of the archetype, the God-man Jesus Christ.

“To me, this is the core of our purpose as Christians, as the Church, and as the bishops and shepherds of that Church,” Metropolitan Tikhon continued.  “The cry of the sanitation workers in 1968 is the cry of all human beings, all of us who, from the moment of His Passion and Crucifixion look to Jesus Christ, not to be told what is right, but to be shown it; not to be guided on the way, but to watch the Way; not to describe life, but to see our own life hanging before our very eyes.

Metropolitan Tikhon further reflected on the task of building up the Orthodox Church in America by “continuing the missionary and pastoral focus of our ministry in the tradition of our local saints by coming to terms with reality and lovingly leading our people through the very difficult and very rapid changes we are experiencing….  All of our dioceses need the attention and support of the whole Church as we all face challenges of economy, population change and loss, preservation of our history and our stories, as well as physical property and an ever-growing post-Christian culture.”  He shared his hope that the Holy Synod will be able to “both express a common vision for us as a Church and to clearly lay out both the challenges and the ways forward through those challenges.”

Members of the Holy Synod heard reports from the OCA’s Officers.

Archpriest John Jillions, Chancellor, reported on his work and introduced Hieromonk Nikodhim [Preston], who reported on the Department of Pastoral Life.  Father John and Cindy Heise then presented the reports on the Office of Review of Sexual Misconduct Allegations [ORSMA] and the Sexual Misconduct Policy Advisory Committee.  It was noted that Cindy, a trained social worker, is now a member of the Department of Pastoral Life, where she focuses on the health of clergy and their families.

Archpriest Eric G. Tosi, Secretary, reported on plans for the 19th All-American Council, slated to gather in Saint Louis, MO July 23-27, 2018.  The Holy Synod reviewed and blessed the AAC’s agenda, handbook and updated instructions, and related matters, which will be released in the immediate future.  He presented the new OCA Policy for Vendors and the new OCA Policy on Bequests and Gifts, passed earlier by the Metropolitan Council, which received the Holy Synod’s blessing.  The minutes and decisions of the Metropolitan Council’s Spring 2018 Session also were blessed.

The OCA’s Treasurer, Melanie Ringa, presented the financial report and reviewed the budget for the 19th AAC and the remainder of 2018.  On behalf of the Metropolitan Council, she presented for the Holy Synod’s blessing the Finance Resolution for the funding of the Church for the period after the 19th AAC.  The Holy Synod blessed the Resolution, which will be reviewed by the Resolutions Committee and presented to AAC delegates for their consideration.

Protopresbyter Leonid Kishkovsky presented a report on the work of the Office of External Affairs and Interchurch Relations, which included a review of developments in the Orthodox Churches throughout the world.  He also reported on the work of Archpriest Daniel Andrejuk, who began duties as Dean of the OCA’s Representation Church of the Great Martyr Catherine, Moscow, and Representative to the Moscow Patriarchate; the OCA’s involvement in various international events; and plans for upcoming primatial visits.

His Grace, Bishop Daniel of Santa Rosa, Chair of the Commission on Statutes and Canons, presented proposed Statute Amendments for consideration at the 19th AAC.  The Holy Synod blessed three of the proposed amendments, all of which will be further reviewed by the Commission.

During the gathering, the members of the Holy Synod hosted the OCA’s 2018 seminary graduates for dinner, during which expectations on parish life were shared.

The Holy Synod of Bishops is the supreme canonical authority in the Church.  It includes, as voting members, all the diocesan bishops of the Church.  The Metropolitan is the ex officio Chairman of the Synod.