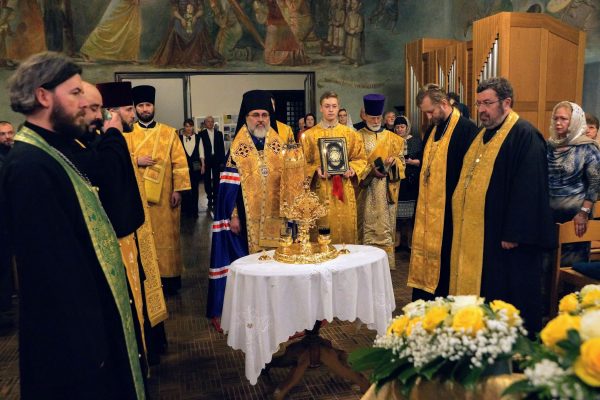 His Grace Bishop Irenei of London and Western Europe made his first archpastoral visit to the Parish of the Holy Trinity in Bern, Switzerland, for the festive celebration of the parish’s 75th anniversary.

The previous day, 18/31 October, 2019, His Grace visited the University of Fribourg, where he presented a lecture on the theme: ‘Christ and the Church: Responding to Currents in Contemporary “Trinitarian Ecclesiology”‘. The event was attended by representatives of the various Local Orthodox Churches as well as prominent Swiss and international theologians and professors interested in the Orthodox spiritual heritage, including many students of the University and its Orthodox Studies Centre. Following the lecture, a prayer service was held in the University’s Orthodox chapel dedicated to St Nicholas and led by the priest of our Diocese’s Bern parish, Priest John Ciurin, after which a reception was held in which Orthodox university students had a warm conversation with His Grace.

The 75th Jubilee celebrations for the Parish of the Holy Trinity in Bern then began on Friday, October 19/1 November, with all-night vigil headed by the His Grace Bishop Irenei, Ruling Bishop of our Diocese, accompanied by the Diocesan Vicar, His Grace Bishop Alexander of Vevey and numerous clergy who had arrived to share in the joy of the occasion — from parishes in Switzerland, France, Luxembourg, Moldova, Russia and Georgia. So great was the number of faithful present that the parish’s normal temple was insufficient in size to contain them, and thus a larger church nearby was made available for these days.

Following the Vigil, Bishop Irenei and Alexander were accompanied by a group of clergy to a dinner hosted for the occasion by the Ambassador to Switzerland of the Russian Federation, His Exellency Sergei Viktorovich Garmonin, at the Embassy. During the meal, which included other members of the diplomatic department, the special place held by the Church Abroad within the Swiss Confederation and beyond, focused on the spiritual nourishment of the Orthodox diaspora, was emphasized by the Ambassador and discussed by His Grace and the clergy, and members of the Embassy diplomatic corps offered their official congratulations on the occasion of the 75th anniversary of the Bern Parish.

On Saturday, 2 November, Divine Liturgy was celebrated at Holy Trinity Church, commemorating especially the Righteous St John of Kronstadt on the occasion of the anniversary. The Divine Service brought together some three hundred faithful and guests who arrived from across the country and neighboring states. After the service, active members of the Bern parish were recognized by gramotas presented by the Diocesan Bishop, after which a festive meal was held, including a small concert prepared by parishioners and the children’s choirs.

Following the concert, guests were acquainted with the 75-year history of the Bern parish through a special audio-visual presentation. The parish’s roots extend back to 1817, when it first appeared in the ‘federal city’ (the Swiss term for the national capital) alongside the Russian imperial mission. The report offered memorial to the first clergymen to serve in Bern, and traced the process of registering as a fully-fledged parish in the 20th century (the church being fully consecrated in 1944). With fond memory, the names of Bishops Leonty and Anthony (Bartoshevich) were called to mind, together with Archimandrite Peter (Proskurnikov), Archpriests Avenir Dyakov and Vladimir Ignaste, and luminaries from the laity who contributed to the founding and development of parish life in the capital city of Switzerland.

Having thus recollected the God-aided past of the Bern parish, His Grace Bishop Irenei offered his heartfelt desire for the community to continue to grow, becoming ever more prayerfully sanctified through shared participation in the Eucharistic Chalice, proudly bring the light of Holy Orthodoxy to the outside world! Then, following words of thanks to the organisers of the festivities, His Grace departed Bern for his first archpastoral visit to Zurich.