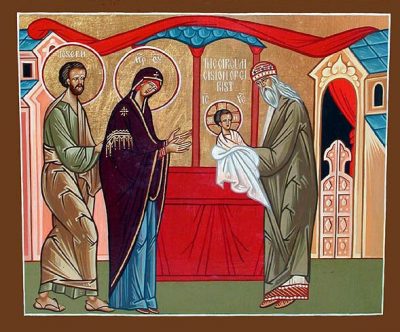 Eight (8) days after His Nativity, our Lord Jesus Christ deigned to be circumcised. He submitted to circumcision, first of all, to fulfill the Law. “Think not that I am come to destroy the Law,” said He; “I am not come to destroy, but to fulfill” (Matthew, Chapter 5). He subjected Himself to the Law to free transgressors subject to the Law, as the holy Apostle teaches: “When the fullness of time was come, God sent forth His Son, made a woman, made under the Law to redeem them that were under the Law” (Galatians, Chapter 4). By being circumcised, He demonstrated also that He had truly assumed human flesh, silencing heretics who taught that His birth was an illusion. Christ’s circumcision clearly showed that He had put on our nature, for how can a fleshless being undergo circumcision? Saint Ephraim the Syrian asks, “If Christ was not in the flesh, who was it that Joseph circumcised? Verily, Christ was incarnate as the Son of man, was reddened by His own infant blood; He suffered and cried from pain, in accordance with human nature” (Saint Ephraim, Homily on the Transfiguration of the Lord).

Furthermore, His physical circumcision foreshadowed our spiritual circumcision. Fulfilling the ancient, external Law, He ushered in the new, spiritual law. The Old Testament commanded that fleshly men be circumcised according to the flesh, but the spiritual man of the New Testament is taught to cut off the passions of the soul: anger, jealousy, pride, unclean desires, and other sinful inclinations. Christ was circumcised on the eighth day to indicate that we are enrolled as inheritors of the future life by being marked with His Blood, for the Eighth Day is the symbol of eternity, according to the divine teachers (Holy Fathers) of the Church. In the Fourth Ode of the Canon for the feast, the Venerable Stephen of Saint Savvas’ Lavra writes, “The Eighth Day, whereon the Master was circumcised, is an image of the Everlasting Life of the age to come.” And Saint Gregory of Nyssa tells us, “The Law dictated that a child be circumcised on the eighth day, the number eight being symbolic of the future age” (Saint Gregory of Nyssa, Homily on the Lord’s Circumcision. The number seven in the Holy Scripture indicates the fullness of time, so that all the millennia from the beginning of creation till the present are spoken of as “seven days”; the eighth day then, is the age to come.)

Circumcision was the Old Testament fore-type of the Holy Baptism and of the expurgation of ancestral sin by Christ’s Blood shed willingly at the Passion…Circumcision was a punishment, as it were, for ancestral (“original”) sin, and a reminder that children are conceived in iniquities, as David says. The brass serpent which Moses fashioned in the wilderness resembled a living snake, but had no venom; similarly, Christ, while possessing our nature, was born supernaturally and without sin of a blameless, unwedded mother. He had no need of enduring the painful wounds of circumcision, being sinless and Himself the Giver of the Law nonetheless, He underwent the rite like a sinner. In coming to us, He assumed the transgressions of the whole world, as the Holy Apostle says, “The Father “made him to be sin for us, Who knew no sin” (2 Corinthians, Chapter 5). By His circumcision the Master showed even greater humility than by His Nativity, for at the Nativity He “made himself of no reputation, and was made in the likeness of men” (Philippians, Chapter 2), as Saint Paul confesses, but at the circumcision the Blameless One appears as a sinner, enduring pain, the penalty for sin. The Innocent One suffered innocently and could say with David, “Then did I restore that which I took not away” (Psalm 68) that is, “I suffered for sins I did not commit.” Circumcision was the beginning of Christ’s sufferings on our behalf, a foretaste of the cup from which He drank the bitter dregs on the Cross, when He cried, “it is finished” (John, Chapter 19)…

“…On this day the Divine Babe also received the name Jesus. (Please note: As Orthodox Christians we follow His example, and Hebrew tradition, by the Priest giving the Christian name to the babe on the 8th day following birth. We do not wait until the day of the baptism to give the child’s name.) When the Archangel Gabriel descended from heaven and appeared to the Most Pure Virgin Mary, he made known that her Son would be called thus; whereupon, she consented to the tidings and cried, “Behold the handmade of the Lord, be it unto me according to Thy Word” (Luke, Chapter 1). Immediately, the Logos/Word of God assumed flesh and took up His dwelling in her immaculate, most sacred womb…

“…The power of Jesus’ wondrous name has been revealed causing Angels to marvel, mankind to rejoice, and demons to tremble; for “the devils also believe, and tremble” (James, Chapter 2). Hades is shaken by this Name; the foundation of the abyss are undermined; the prince of darkness flees; idols are toppled; the gloom of idolatry is dispelled; and the light of piety is shed abroad, illuminating “every man that cometh into the world” (John, Chapter 1). “Every knee of things in heaven and things in earth, and things under the earth” (Philippians, Chapter 2).

“…We lovingly praise and fervently revere Thy sweetest and Most Holy Name, O Most sweet, All-Compassionate Jesus! We fall prostrate…Keep and preserve Thy servants, and receive us into Thy Kingdom, that with the Angels we may hymn and glorify Thy Most Honorable and Majestic Name forever. Amen. (Source: The Great Collection of the Lives of the Saints)