Source: St. Andrew Greek Orthodox Church
In these unpredictable times, we should recall the Divine words of our Lord Jesus Christ: "These things I have spoken to you, that in Me you may have peace. In the world, you will have tribulation; but be of good cheer, I have overcome the world" (John 16:33).
Protopresbyter George D. Konstantopoulos | 04 September 2020 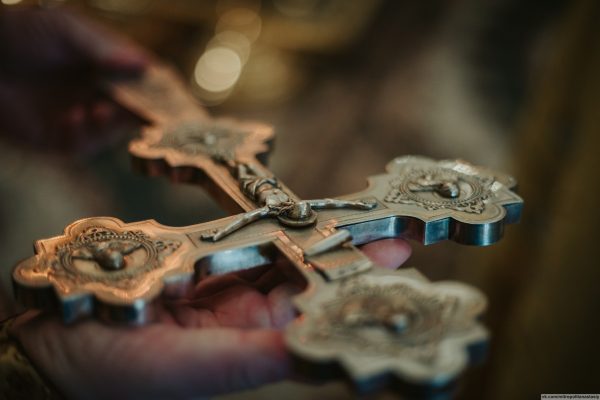 One’s identity has always been sacred and something that could never be violated. In recent years, however, there has been a deliberate and consistent attempt to steal one’s identity. It is referred to as ‘identity theft.’ People who have experienced an identity theft feel violated and devastated. Currently, there are many ways or measures for securing one’s identity and preventing this breach from taking place.

There is also our religious identity which we should be concerned with and to protect. Looking back historically to the early Church, Christian martyrs were brought before their pagan persecutors they often revealed proudly with the words: “I am a Christian!”

As we know the first Christians had no earthly identity. They were dead to this earthly life and world. They believed that they belonged to God’s Kingdom. Instead, they believed that they were “fellow citizens with the Saints and members of the Household of God” (Ephesians 2:19). “… a chosen race, a royal priesthood, a holy nation, God’s own people” (1 Peter 2:9).

Orthodox Christians ought to have a strong knowledge of the Faith to practice it, to preserve it, to protect it, and to convey it to future generations. How else can they confess and say openly, “I am an Orthodox Christian, I belong to the One, Holy, Catholic, and Apostolic Church of Christ.” “I am of one mind, one heart, one soul, and one body with all those who belong to Christ and the Church. It is therefore imperative that the Orthodox Christian stand steadfastly opposed to anyone who desires to use Christ’s Church for any secular, nationalistic, ideological, or political purpose.

The Holy Orthodox Church is in the world to save it. We need to recall the words of the Holy Scripture: “For God has so loved the world that He gave His Only-begotten Son, that whoever believes in Him should not perish, but have eternal life. For God sent His Son into the world, not to condemn the world, but that the world through Him might be saved” (Saint John 3:16-17).

“Our Holy Orthodox Church can never be identified with this world. It is the presence of God’s Kingdom in this world until Christ comes again in glory at the end of the ages to establish God’s Kingdom throughout the whole of creation. But the Church is in the world for the sake of the world’s life and salvation.”

The persecution of Our Lord and Savior Jesus Christ and His Church has never ceased. We should not be surprised or unaware. It is therefore important to stay alert and vigilant on what is taking place around us and the threats against our Church. All of us without exception must remain steadfast in our faith and be loyal only to Christ God. We cannot become complacent and indifferent to the many threats facing our Church today.

Our Holy Orthodox Church is a worshiping Church. We rejoice in our liturgical life and devotion. We adore our divine services and Mysteria (Sacraments), our rites and rituals, our inspiring traditions. The liturgical life and worship have preserved the Orthodox Church and the faith of millions of Orthodox Christian believers in the darkest hours of oppression and enslavement from worldly wicked powers over the centuries.

It is not enough to just be alarmed about world conditions and dangers today. World conditions, as all of you know, change quickly and the demands are that humanity must accept those changes if it is to survive. Most of the time people are given another option. Those of us who know world history, know that changes can be good or they can be evil, i.e., communism, fascism, nazism, secularism, etc. Changes that were imposed upon the people of the world at their detriment and loss of freedom. Good changes are the changes in medicine, communication, education, technology, science, transportation, exploration, quality of life, etc.

Be strong and unyielding in your convictions, principles, values, and most of all in your faith in Christ. Don’t be mislead, don’t be deceived, don’t be naive, don’t be influence by what you are told on T.V. or the internet. The Lord has given us the ability to discern between good and evil. He has given a good mind to think wisely and soundly.  Protect your Orthodox Christian identity with all your might. Live your Orthodox Christian faith daily and make God real in your home.

The Almighty God, Father, Son, and Holy Spirit, was, is, and ever shall be in control of His creation. He will not ever allow a corrupt and faithless people to destroy that which He created with love. Historically we have seen those dictators and tyrants who wished to dominate the world brought His wreath upon themselves instead. All of them failed and will continue to fail. Our Loving God is patient with us and He has given us a free will to act responsibly and wisely. Hopefully, people will choose to worship Him, the Creator, and not the creation (materialism).

In these unpredictable times, we should recall the Divine words of our Lord Jesus Christ: “These things I have spoken to you, that in Me you may have peace. In the world, you will have tribulation; but be of good cheer, I have overcome the world” (John 16:33). Despite persecution and suffering, Christians can maintain the peace and joy of Jesus Christ Who has “overcome the world” of darkness through His saving work.