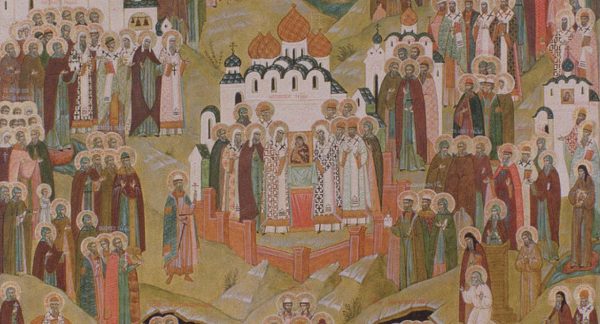 Today is a special day in the life of our great and multi-national Russian Church—we celebrate the memory of all the saints who shone forth in the Russian land.

In speaking about the Russian land, we have in mind not only the contemporary territory of the Russian Federation, but all historical Rus, which significantly differed in its political borders at different times from contemporary Russia, and in its spiritual oneness continues to remain a special spiritual expanse, uniting people living in various cities and in various countries.  When we speak about the saints of the Russian land, we have in mind the saints of historical Rus—the God-pleasers who have shone forth in Russia, the great assembly of saints who are venerated by the Ukrainian Orthodox Church which is an integral part of the Moscow Patriarchate, and the saints who shone forth in Belarus, the land of Moldavia, in the Pre-Baltic, in Middle Asia, in China and in Japan—everywhere, where the Russian Orthodox Church carried out her work and where her salvific missions were established.

Her saints existed in the historical territories of Rus.  This tells us that the Divine Sower chose our land upon which to sow the Word of God, chose her not as a land filled with stones, not as a land on which the seeds of Holy Orthodoxy would fall among tares, not as land on which birds would come and devour the seeds which He had sown, but as on fertile soil, on which His salvific Word would reap such an incredible and rich harvest of fruit (Mt. 13:1-8; Mk. 4:1-9; Lk. 8:4-8).  The Assembly of the saints of the land of Russia—they are our defenders and protectors.  For centuries, in the various territories of historical Rus, there have shone forth, by God’s mercy, luminaries, martyrs, confessors, venerable ones, righteous princes, and fools-for-Christ.  On the canonical territory of the Russian Orthodox Church, there is no country where, apart from the saints of God known to the entire Russian Church, their local saints would not be venerated.

Each of us has our favorite saints from the assembly of the saints of the land of Russia—those whose names we bear, those whose relics we venerate, and those saints who have played a special role in our lives.  It is impossible to list all of these saints and their spiritual struggles.  However, it is possible to say today, on this festive and joyous day of the Russian Orthodox Church:  the salvific Word of God spread good and rich seedlings on our land.  For us this is not a reason to be proud and to exalt ourselves over other lands and peoples, but above all to think about the historical responsibility placed on each of us.  When we remember all the saints of the land of Russia, we remember not only people who lived in the distant past, but also those who lived not so long ago,—the new-martyrs and confessors, whose struggles spiritually strengthened the Russian Church in a special way.

We know that also in our own days there are holy people living on the earth, who the Church has not yet glorified.  The struggle of sanctity, which has been commanded to us by our forefathers and which we contemplate with such brightness in the faces of the saints of the Russian land, continues even today in our land.

In this holy temple, as in all of the other temples of the Russian Church, we offer up prayers for the peaceful ending to the enmity which exists in the Ukrainian land.  Today we call this land the Ukraine, but at one time it was called Kievan Rus.  Until relatively recently, this land was part of a single state formation.  And in spite of the fact that on this land there is now an independent state, she continues to be part of the one spiritual expanse which is called the Russian Orthodox Church, and the majority of the faithful in the Ukraine, despite all efforts to tear them away from the unity of the Church, which has been going on for more than twenty years, they still maintain this unity, despite difficult circumstances.

Now blood is shed on Ukrainian soil.  Every day we hear about new victims, about many wounded, about those left homeless and about refugees.  There are various opinions about the reasons for this confrontation, and they are evaluated in various ways, but one thing for us as Orthodox Christians is completely obvious:  if blood is being spilled—this means that the Devil is triumphing, as was mentioned in the encyclical of our All Holy Patriarch.  If brother opposes brother, this means that the eyes and hearts of men are clouded.  For this reason, especially fervent prayers are needed so that this opposition would end, and everyone on whom the fate of the Ukrainian people depends would first of all think about saving human lives and not about momentary political interests.

We turn to the Lord with this zealous prayer for the Ukrainian land, Who also sowed on this land His Word, which has resulted in bountiful fruit of sanctity.  We turn to the Mother of God, who has always been recognized as the Protectress of All Rus, for you see, it is not by chance that the Russian land has been called “the house of the Mother of God.”  And of course, on this day, we turn with fervent prayer to all the saints of the Russian land, asking them to restore not the political but the spiritual unity of Holy Rus, so that enmity would be pacified, so that the people would again be inspired by the ideals of holiness, purity, virtue, spirituality—those ideals which the Russian land gave to our people and to the entire world.

This sermon was given by Metropolitan Hilarion of Volokolamsk, Chairman of the Department for External Church Relations, at the Church of the “Joy of All Who Sorrow” Icon of the Mother of God on June 22, 2014.