If we search the canons which the Holy Spirit has given us through the Holy Church, and the teachings of our Holy and Godbearing fathers, then we will find that with one accord and as if with a single voice, they direct us to partake of the Holy Mystery not merely frequently, but constantly.
Archbishop Lazar Puhalo | 15 June 2009

If we search the canons which the Holy Spirit has given us through the Holy Church, and the teachings of our Holy and Godbearing fathers, then we will find that with one accord and as if with a single voice, they direct us to partake of the Holy Mystery not merely frequently, but constantly.

The practice of infrequent Communion, whatever its precise origin, became concrete in some of the local churches as a result of Latin influence (primarily, of course, through the Uniate occupation of Western Russia and the Ukraine – prior to this century, Latins were deprived of frequent communion and were taught to commune only four times a year).

Many of the legalistic arguments of the Latins have been employed by some of our own people in trying to maintain the nonOrthodox practice of infrequent Communion. No one, however, has been able to justify it by Orthodox Christian means. “0, the power of custom and prejudice,” laments St John Chrysostom.

The canons of God’s Church answer our question in this manner:

The Holy Apostles have decreed that, “All those faithful who enter and listen to the Scripture, but do not remain for prayer and [partaking oj] the Holy Mysteries must be excommunicated. … ” (c.9 of the Apostles). 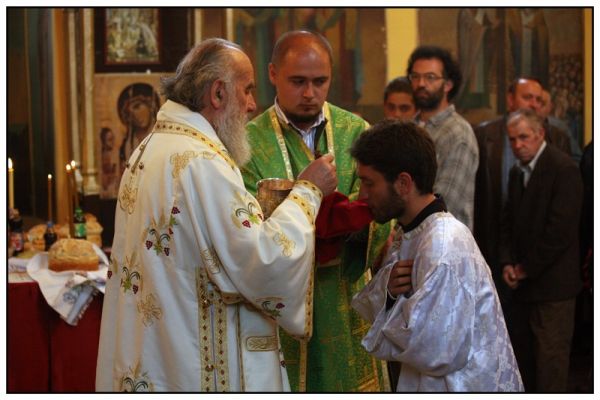 According to the explication of the canon in the Rudder, this means that all who are not penitents and who thus remain for the prayers, not departing when the proclamation “Depart!” is heard, must without fail receive Holy Communion. Our Holy and Godbearing fathers gathered in the Holy Spirit at Antioch directed us:

“And those persons who enter the church and listen to the sacred Scriptures, but shun the participation in the Eucharist, … we decree that these people be outcasts from the Church until they confess and exhibit the fruits of repentance. ” (c.2 of Antioch).

The explication of the canon explains that this refers precisely to people who excuse themselves for abstaining from Holy Communion “on account of humility or reverence.” Such humility would be feigned since it is contradictory to obedience and such reverence would be false since the greatest act of reverence to the Eucharist is partaking of it.

Again, our Holy and God-bearing father Timothy of Alexandria (ca 370) expresses the universal consensus of the Holy Church when he is asked:

“If anyone who is a believer be possessed of a demon, ought he to partake of the Holy Mysteries or not?”

“If he does not repudiate the Mystery, nor otherwise in anyway blaspheme, let him commune, but not every day in the week; for it is sufficient for him on the Lord’s Day only. “

In other words, even a person possessed of a demon is to partake of the Holy Mystery every Sunday, while, it is quite clear, the rest of the faithful are to partake every day, where possible.

St John Chrysostom seems to synthesize the thoughts of the fathers and give expression to the concept of the Church conscience on partaking of the Holy Mysteries, in his Homily 3 on Ephesians. Here, he instructs both those who would take communion too lightly and without preparation and those who fail to take Communion at each Divine Liturgy:

“I observe how many partake of Christ’s Body lightly and just as it happens, and rather from custom and form than from consideration and understanding..”

“When, says one, the holy season of Lent sets in, whatever a man may be, he partakes of the Mysteries, or when the day of the Lord’s Theophany comes. And yet it is not the Theophany nor is it Lent that makes a fit time for approaching, but it is sincerity and purity of soul. With this, approach at all times; without it, never. ‘For as often, he [Paul] says, ‘as you do this, you proclaim the Lord’s death,’ that is, you make remembrance of the salvation that has been wrought for you, and the benefits which I have bestowed. ‘ …. And do you, when you draw nigh to a sacrifice at which the very angels tremble, do you measure the matter by the revolution of season? Observe the vast inconsistency of the thing. At the other times, you do not come … ; but at Pascha, no matter how flagrant an act you may have committed, you come. Oh, the power of custom and prejudice! In vain is the daily Sacrifice [offered}, in vain do we stand before the altar! There is no one to partake. I am not saying these things to induce you to partake under any circumstances, but that you should render yourselves worthy to partake. Are you not worthy of the Sacrifice nor of the participation [in Communion}? If so, then neither are you worthy] of the prayer. You hear the herald say, ‘Depart!’ As many as do not partake are in penitence. If you are one of those you ought not to partake; … Why then does he say depart you that are not qualified to pray, while you have the effrontery to stand still? You are not of the number of those who are qualified to partake and yet you are indifferent about it and regard the matter as nothing. “

And here is the point. It is not those who partake constantly of the Holy Mysteries who take them for granted, but it is those who do not partake who count it as insignificant, for, if they did not take the Holy Mystery merely for granted, then they would either prepare themselves to partake, or else depart weeping that they were unworthy to do so, when the deacon proclaims, “Depart!” Those who partake constantly, on the other hand, do not take the Eucharist for granted, but rather count it as the greatest necessity for their lives.

“Look, I entreat you, “Chrysostom continues: “A royal table is set before you, angels minister at the table, the King Himself is there, and do you stand gaping? Are your garments defiled and yet you take no account of it? Or are they clean? Then partake …. For everyone that does not partake of the Mysteries is standing here in shameless effrontery. It is for this reason that they which are in sins are first of all sent out …. You [who are not partaking] are no more allowed to be here than the catechumen is.

“One might go on to other points, and those more awful still; but in order not to burden your understanding, these will suffice. They who are not brought to their senses with these certainly will not be with more. That I may not then be the means of increasing your condemnation, I entreat you not to forbear coming to church, but to render yourselves worthy of being present and of approaching Uor Communion]. “

Finally, our Holy and God-bearing fathers of the Sixth Ecumenical Council, calling upon us to come forth for Holy Communion have taught us:

“The divine Apostle loudly proclaims that man created in the image of God is to be a body of Christ and a temple. Standing, therefore, far above all sensible creation and having attained to a heavenly dignity by virtue of the saving Passion, by eating and drinking Christ as a source of life, he readjusts both his eternal soul and his body and by partaking of the divine Grace he is continually sanctified” (c.1 0 1 of 6;. cf lCor.l2:27; 2Cor.6:16).

In marriage, love must be an ever expanding circle. Our children naturally expand its boundaries, but each partner…

When we speak of true morality, we are not referring to simple obedience to a system of law…

As we prepare to celebrate the Nativity of Christ, it is customary for all hierarchs to issue a…