How to Become a Living Relic: Homily for the Sixth Sunday of Matthew

Source: Eastern Christian Insights
Like the martyrs of long ago and today, we must do the hard work of growing in holiness if we are to have any hope of becoming living witnesses of Christ’s healing and blessing of humanity.
Priest Philip LeMasters | 13 July 2015 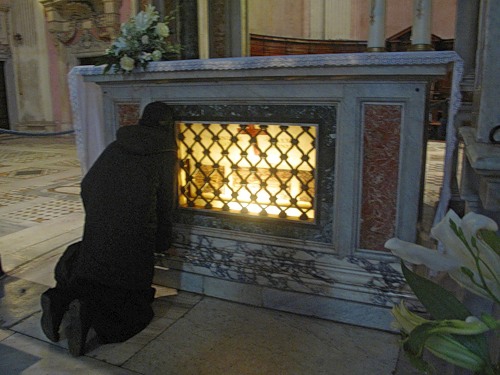 Last Sunday I went to liturgy in an Orthodox parish in Rome that meets in a vacant Catholic church.  After the service, the priest showed me the bones of early Christian martyrs kept there in a cabinet. Rome was the capital city of an empire that put so many to death for their faith in Christ and their refusal to worship the emperor and other false gods.  Whether in great cathedrals or humble parish churches, the relics of saints are never far away in such a place.  They are tangible signs of holiness.

From as early as anyone can tell, Christians preserved the bones and other relics of saints and martyrs.  That may appear to be an odd practice, but remember that in the Old Testament a dead man came back to life when his body was put in the grave of the Prophet Elisha and touched his bones.  God worked many miracles through the touch of the hands of the Apostles in Acts—and even through the aprons and handkerchiefs of St. Paul and the shadow of St. Peter. Such events remind us that God, Who created us from the dust of the earth, calls us to holiness in every dimension of our existence—body, soul, and spirit.

In today’s gospel reading, our Lord demonstrates His divinity by doing something tangible and practical for a paralyzed man who could not move his own body.  Not only did He forgive the man’s sins, but He gave evidence of His authority to do so by enabling this fellow to “rise, take up your bed, and go home.”  Those who saw it marveled and glorified God. Christ made him a living witness through the healing of his body of the salvation that He has brought to the world.  Our Lord did not simply give him ideas, rules, or feelings.   He enabled him to manifest visibly the blessed life of the God-Man as a whole, complete person.  Everyone could plainly see the difference Christ made in this man’s life.

Likewise, Saint Paul exhorted the Romans to become living evidence of Christ’s salvation, regardless of their particular gifts.  In words that still apply to us directly today, he wrote: “Let love be genuine; hate what is evil, hold fast to what is good; love one another with brotherly affection; outdo one another in showing honor. Never flag in zeal, be aglow with the Spirit, and serve the Lord. Rejoice in your hope, be patient in tribulation, be constant in prayer. Contribute to the needs of the saints, practice hospitality. Bless those who persecute you; bless and do not curse them.”

In this passage, St. Paul urges the Roman Christians to become like that formerly paralyzed man whom Christ healed and told to get moving.  He called them to specific practices and actions that do not come easily to human beings in our spiritually and morally corrupted state, and which were certainly counter-cultural in their time and place. They lived in a proud, violent, and cruel society that thought nothing of abandoning unwanted children to die and treating slaves, the poor, and foreigners as far less than human.  The slaughter of human beings was popular entertainment in the Colosseum. The decadence and immorality of pagan Rome remain legendary.

In contrast to the conventional attitudes and behaviors of their day, the early Christians did what it took to show the world something radically new.  As we know even from the writings of those who persecuted them, they lived the Christian life in practical, tangible ways that got the attention of their neighbors and drew many of them to the Lord.  For example, they rescued infants others had abandoned to die and raised them as their own.  They risked and even gave up their lives to care for the sick during plagues.  They did not define themselves or others by divisions such as Jew, Gentile, slave, and free. They modeled purity in the relationship between man and woman in stark contrast to their mainstream culture. Persecuted literally to the point of death, they prayed for their tormentors and laid down their lives like their Savior.  They actually lived and died this way with bodies just like ours.  And their witness is a key part of how the Church grew, spread, and flourished throughout the Roman Empire and around the world.

Had these early Christians thought that their faith concerned simply their ideas or feelings, the story would have been very different.  Had Christ simply forgiven the sins of the paralytic and not visibly restored his health, that story would have been very different.  Perhaps one of the reasons that so many in our culture do not take the faith seriously is that too many Christians do not rise up from their spiritual and moral weakness actually to live in ways that stand in clear contrast to the dominant customs and habits of our time.  If we do not live as clear examples of what happens when a human being puts on Christ and becomes a partaker of the divine nature, then why should we think that anyone will take our faith seriously, let alone be drawn to it?  No, we must actually live the life of Christ and the Saints in our own flesh and blood if we are to bear faithful witness.

Talk is cheap, even when it is about religion or morality; but taking up the cross is costly, personal, and real.  The early Christian witness was fundamentally a matter of how people lived their lives in sharp contrast to what was popular and easy.  It required discipline and sacrifice.  They explained and defended their faith with integrity because they practiced what they preached in a fashion that attracted others to a new life.  They modeled holiness to the point of death and drew others to join them.  They knew that tangible, distinctive practices for how we live our lives as Christians are absolutely essential for calling the world to its salvation.

Like the martyrs of long ago and today, we must do the hard work of growing in holiness if we are to have any hope of becoming living witnesses of Christ’s healing and blessing of humanity.  If we are not doing that, we have no standing to speak a critical word about any aspect of the moral and spiritual corruption of our society and world.   Whenever we preach what we do not practice, we bring judgment upon ourselves and give others a bad impression of our faith.

The relics of saints are about as tangible as you can get, for it is easy to handle pieces of bone or cloth.  Our calling is to make our own lives relics of holiness that are visible signs of the salvation of the world.  Fulfilling this calling requires more than words, feelings, good intentions, or saying we support a cause of whatever kind.  We must actually live as those united with Christ in sharp contrast with a world that still worships false gods and thinks that those who refuse to do so are deluded and dangerous. The way to convince skeptics and opponents is rarely by words alone, but more fundamentally by obeying the command of Christ to the paralytic to rise up from the weakness of sin and move forward in the blessed life for which He created us from the dust of the earth.  We must be faithful to Him in our own flesh and blood in our daily lives if we want to entice others to marvel, give glory to God, and enter into the life of the Kingdom. 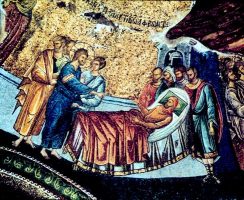 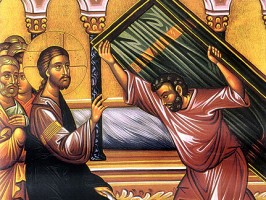 Most viewed articles
Blasphemous and Obsessive Thoughts Come Into My Mind. What Do I Do?158
An Extraordinary Session of the ROCOR Synod of Bishops Convenes115
Funeral Services for His Eminence Metropolitan Hilarion of Eastern America and New York81
Is God a Fool?75
How to Respond to Opposition to the Gospel66
Metropolitan Joseph, Bishop Thomas Celebrate Centennial of Little Falls Parish56
A Piece of Rock Falls Down on the Skete of St. Anna on Mt. Athos49
PRAY: 14 Students, One Teacher Dead After Texas Elementary School Shooting43
His Beatitude Metropolitan Tikhon Issues Statement on Tragic School Shooting in Texas36
Most popular authors
Pravmir.com team245
Fr. Eugene Murzin158
Archpriest Stephen Freeman75
Archpriest Basil Ross Aden66
Subdn. Peter Samore56
Associated Press43
Metropolitan Tikhon of All America and Canada36