Source: Interfax-religion
Natalya Mihailova | 26 October 2016
Moscow, October 26, Interfax - The Hungarian authorities have allocated 100 million forints (320,000 euro) for the restoration of a tower of the Russian Assumption Cathedral in Budapest. 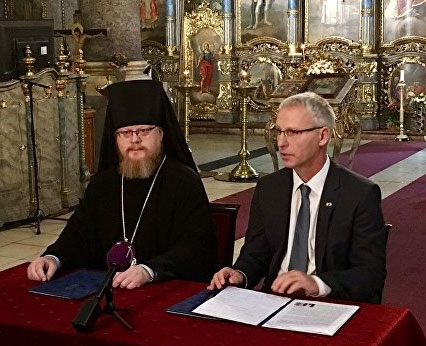 An agreement to that effect was signed by the head of the Hungarian Diocese, Bishop Tikhon of Podolsk, and Minister of State Miklos Soltesz of the Hungarian Ministry of Human Capacities, the Russian Church said on its website.

The hierarch thanked the country’s authorities for allocating the subsidy and Prime Minister Victor Orban for “the firm position of preserving the unshakable Christian foundations.”

The Assumption Cathedral is the oldest Orthodox church in Hungary. It was built in 1791-1801. During the Second World War it suffered serious damage, one of its towers was destroyed. Some restoration work was carried out in 2006-2009, under the then Bishop Hilarion of Vienna and Austria (now head of the Synodal Department for External Church Relations), but it was never completed.