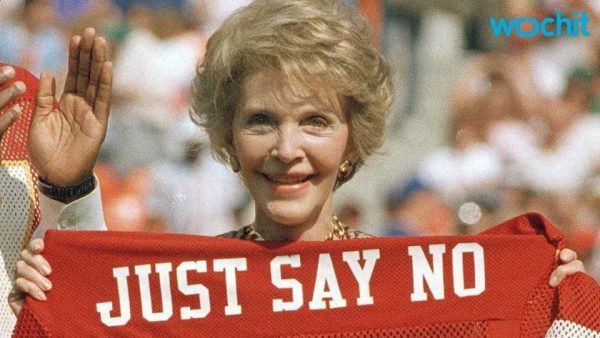 In the early 1980’s, First Lady Nancy Reagan kicked off a signature campaign against drug use in the United States. She called it the “Just Say No” to drugs.  The phrase was memorable, catchy, and seemed to be the essence of simplicity itself.   After years of failure in the presidential sponsored “war on drugs”, many believed that the First Lady had found something that just might work. Decades later, we know that the “Just Say No” campaign didn’t work.  In fact, some may argue that it had the opposite effect, especially in urban areas like New York City where the crack epidemic was about to lay waste to entire neighborhoods. Today, neuroscientists understand why.

“Just Say No” was well-intentioned and much effort was expended to ensure its success but it may have made the problem worse.  This is not a criticism of Mrs. Reagan or all those who worked hard to prevent kids from using drugs.  They simply were unaware of how the mind associates words and concepts in terms of the reflective and impulsive systems that we now know influence human behavior.  Simply put, negations don’t register at all in the impulsive system. Hence, if the addict were to tell him or herself not to do something, “Don’t smoke, don’t smoke don’t smoke,” it is actually processed at an impulsive level as “Do smoke, do smoke, do smoke,” because the impulsive system cannot do abstract, logical transformations even at the most simple a-not-a level. Far from discouraging impulsive behavior, prohibitions actually encourage it, even in the absence of rebelliousness and in the presence of the best intentions by the person dragged this way and that. That’s why one of the worst things for compulsive eaters or gamblers to do is to say to themselves, “Don’t eat that” or “Don’t gamble now,” which at impulsive level coaxes them to do just that.

There are, however ways for one’s self-talk to influence the impulsive system beneficially. While the negative statement “don’t smoke” morphs into “do smoke” in the impulsive system, the affirmation “smoking kills” remains as such in even in the non-rational, impulsive system and can help tilt the balance away from harmful behavior. This observation has multiple implications. When struggling with sin, it is far better to recite the beatitudes than the ten commandments. In other words, the soul is more moved by hearing “Blessed are the meek: for they shall inherit the earth” (Matthew 5:5) than “Thou shalt not kill”(Exodus 20:13) or hearing “Blessed are the pure in heart: for they shall see God” (Matthew 5:8) than “Thou shalt not commit adultery.” (Exodus, 20:14). It is not without reason that the Beatitudes are sung at every Divine Liturgy and not the Ten Commandments.

Throughout the ages, ascetics and Saints have advocated turning to Christ in simplicity at times of trial, rather than relying on the power to “just say no.” A modern Saint, Father Porphyrios of Kavsokalyvia, spoke about this to his spiritual children struggling against the passions.  His counsel was simple and straightforward yet demonstrated a profound understanding of human behavior.

“Everything is inside us, instincts and all, and are asking for fulfillment. If we don’t fulfill them they will take their revenge, unless we redirect them elsewhere, towards the higher, towards God. You don’t become holy hunting down evil. Forget about evil. Look towards Christ and He will save you. Instead of standing outside the door to drive away the enemy, ignore him. Is evil coming this way? Gently let yourself go the other way. Meaning, is evil coming to attack you, give your internal strength to the good, to Christ. Plead: “Lord Jesus Christ, have mercy on me”. He knows how to have mercy on you, in what way. And when you are filled with good, you won’t turn to evil anymore. You will become good by yourself, with God’s grace. How can evil find any ground anymore? It disappears! Does a phobia or disappointment get a hold of you? Turn to Christ. Love him in simplicity, with humility, without demands and He will free you. Do not choose negative ways to correct yourselves. You don’t need to be afraid of the devil, or hell, or anything. They create a reaction. I too have a little experience in those things. The point is not to sit, to beat or strain yourselves to improve. The point is to live, to study, to pray, to advance in love, in Christ’s love, in the Church’s love.” (Life and Words, by Saint Porphyrios)