Source: DECR
Patriarch Kirill of Moscow and All Russia | 29 May 2019 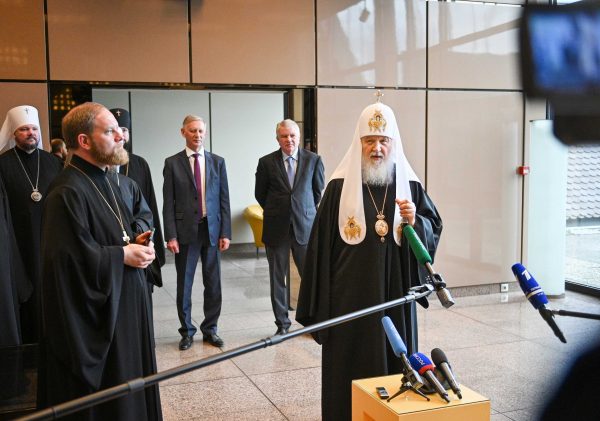 On May 27, 2019, His Holiness Kirill, Patriarch of Moscow and All Russia, completed his visit to Strasbourg, France.

At the airport, His Holiness was seen off by Metropolitan Ioann of Chersonese and Western Europe, Russian ambassador to France A. Meshkov, Russian permanent representative to the Council of Europe I. Soltanovsky, Russia’s consul general in Strasbourg Yu. Solovyov, Moscow Patriarchate representative to the Council of Europe and rector of the Parish of All Saints in Strasbourg Archimandrite Philip (Riabykh).

Before the departure, the Primate of the Russian Church answered questions from mass media reporters:

– Why is it so important to open an Orthodox church in Strasbourg, which is called the European capital city?

–  In opening new churches, we, first of all, respond to people’s wish, for it is impossible to build a church in a place in which there are no believers. For this reason, the opening of a church in Strasbourg is our response to the numerous requests of the Orthodox people, including Russians, Ukrainians – those who reside in Strasbourg and those who often come to this city. The consecration of the church in the presence of a great number of people was a visible testimony of the fact that they need this church.

I would like to thank the city authorities, the Catholic Archbishop of Strasbourg, the public who have supported the idea of building a Russian Orthodox church. The construction was carried out in a benevolent and good setting. And, of course, the consecration of this church and a prayer together with Strasbourg townsfolk became an important event for me.

–  Today, there was a positive and substantial talk [with the Council of Europe Secretary General Mr. Thorbjørn Jagland]. We discussed many issues including the participation of Russia in the Council of Europe. In the attitude of the secretary general I saw nothing that could prevent Russia from resuming her participation in the work of this organization. I do not want to go into details of this topic, for it lies in the political sphere. I try to avoid making comments of this kind. But I very much hope that Russia will take her place in the Council of Europe, will continue cooperation with it because the decisions of this organization are important also for ordinary people living in Europe. Besides, it is a remarkable platform for broad and diverse dialogue between representative of Russia and the Council of Europe. I hope that everything will return to its course and this page of misunderstanding will be turned over.

–  Your Holiness, was the problem of the faithful in Ukraine raised at your meetings with the Council of Europe Secretary General T. Jagland and Commissioner for Human Rights D. Mijatovic? What agreements did you manage to reach? And what hopes do you pin on the visit you made to Strasbourg?

–  I constantly raise the topic of Ukraine, especially here, in Strasbourg, because this topic directly concerns human rights and religious freedom. In a European country, the rights of an enormous number of the Orthodox faithful were grossly violated. I will not enumerate all these violations; they are well known, but they have resulted in people’s real suffering only because they wanted to remain Orthodox and to remain members of the Russian Orthodox Church, affiliated to their Ukrainian Orthodox community.

The latest changes that have taken place in Ukraine in connection with the election of a new president inspire hope, of course. I am familiar with the thoughts of many Orthodox Ukrainians; they connect this election with positive changes in the sense that the discrimination on the grounds of the Orthodox people’s affiliation with a certain Orthodox jurisdiction will be stopped, and everybody will have equal rights. I share these hopes of Ukrainians in connection with the election of Mr. Zelensky as new president and very much hope that the boorish policy – absolutely inadmissible not only in Europe but also in most countries of the world, when decent citizens are discriminated and that not on the ground of faith but on the grounds of affiliation with a particular organization – will go out of the Ukrainians’ life for good. I think these hopes were shared by my interlocutors here in Strasbourg.

–  Your Holiness, how can your meeting with the commissioner for human rights influence the situation in Ukraine?

–  We had a very open, and I would say benevolent, discussion on all these issues. Of course, each impression is subjective but I hope that a subjective impression reflects an objective situation. All that has happened even not to the Ukrainian Orthodox Church or to the Church as an institution but to ordinary believers, who were driven away from their churches and assaulted bodily, is not a tale or a fantasy – all this is recorded on video and reflected in appropriate documents. There are living witnesses to this. All this cannot but worry a normal person, the more so those who are responsible in Europe for human rights and religious freedom.

I would like to say once again that I had not a single negative feeling as to the discussion on all these issues with people I met here in Strasbourg. But again I would like to stress that changes for the better to a large extent can and I believe must be defined by a new policy of the new Ukrainian leadership.

–  Your Holiness, your yesterday’s words that three churches a day are built in Russia have provoked an ambiguous reaction. In particular, there is criticism as to for what the Russian Orthodox Church needs so many churches. What would be your response to this?

–  For the last nine years, 9 thousand churches have been built. On average, it is three churches a day. The construction of churches is not the implementation of a design conceived by somebody from the authorities, as it is impossible to build a church by order.

Churches are built by people and for people in response to their expressed wish. Almost in all the case, except for certain political-exotic situations, the people strongly support such construction. As long as people have a need for churches, including churches round the corner, they will be built.

I would like to say once again, a church does not hinder anybody. If we encounter an irrational aggressive reaction to the construction of churches, then it is some shady business. If rational factors are absent, but what is present is an irrational manifestation of malice, then who can harbour malice against building an altar dedicated to the Lord and Saviour? – Only an enemy of the Saviour. Unfortunately, there are those who consciously or unconsciously assist this enemy of the Lord, including in struggle with churches. I believe it is an exotic phenomenon, a very rare one, and God grant that nothing of the kind spread through our Orthodox Motherland.

In conclusion of the talk with journalists, His Holiness Patriarch Kirill of Moscow and All Russia thanked the Russian ambassador to France A. Meshkov, the Russian permanent representative to the Council of Europe I. Soltanovsky, and the Moscow Patriarchate representative to the Council of Europe and rector of the Parish of All Saints in Strasbourg Archimandrite Philip (Riabykh), and departed for Moscow.