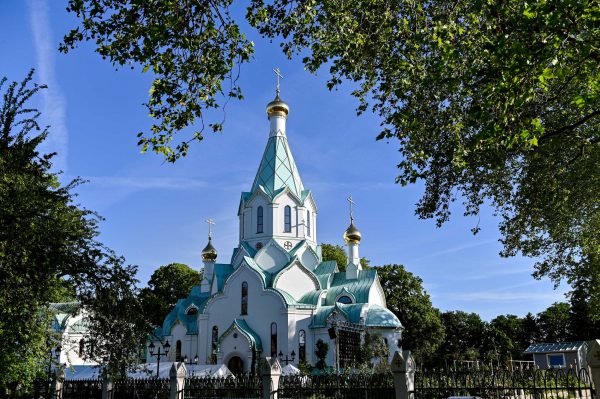 On 26 May 2019, the 5th Sunday after Pascha, Sunday of the Samaritan woman, His Holiness Patriarch Kirill of Moscow and All Russia celebrated the Great Blessing of the Russian Orthodox Church of All Saints and officiated at the Divine Liturgy in the newly consecrated church.

Among those concelebrating with the Primate of the Russian Orthodox Church were Metropolitan Hilarion of Volokolamsk, chairman of the Moscow Patriarchate’s Department for External Church Relations (DECR); Metropolitan Sergy of Singapore and Southeast Asia; Metropolitan John of Korsun and Western Europe; Archbishop Antony of Vienna and Budapest, head of Moscow Patriarchate’s Administration of Institutions Abroad; Bishop Viktor of Baryshevka, representative of the Ukrainian Orthodox Church to the European institutions and international organizations; Archimandrite Philaret (Bulekov) DECR vice-chairman; Hegumen Philipp (Riabykh), representative of the Moscow Patriarchate to the Council of Europe and rector of the Church of All Saints in Strasbourg; Rev. Maxim Politov, sacristan of the Holy Trinity Cathedral in Paris; Rev. Alexander Volkov, head of the Patriarchal press service.

The Divine service, singing during which was the choir of the Kievan theological schools conducted by Archimandrite Leonty (Tupykalo), was celebrated in the Church Slavonic and French languages.

The church building could not contain all worshippers, and live broadcast was arranged for those who stood at the square in front of the Church of All Saints.
After the Liturgy, Hegumen Philipp welcomed the Primate of the Russian Orthodox Church on behalf of the community, saying: ‘We are happy as the co-workers of God in constructing this church, and we feel as such with all the saints in whose honour it is consecrated, especially with those who have shown forth in this land in the first millennium of Christianity.’

He mentioned St. Odilia of Alsace who had done a lot for Christianity in the second half of the 7th and the beginning of the 8th cc., and presented His Holiness with an icon of the saint made by a Russian icon-painter.

The Strasbourg Mayor Ronald Ries welcomed the Primate of the Russian Orthodox Church on behalf of the residents. He dwelt on the history of the construction and thanked a Russian architect Dmitry Pshenichnikov and his French colleague Michel Arnold calling their work marvelous and added there were no disputes and debates as the citizens of the neighborhood welcomed the construction.

Mayor Ries noted that the church is now a part of religious heritage of Strasbourg along with the renowned Catholic cathedral which has recently marked its thousandth anniversary, with a Protestant church, a large synagogue that was opened right after the war, and the main mosque.

‘May this church serve the Orthodox community, people of Strasbourg and its environs, allowing them to offer up their prayers,’ he concluded.

His Holiness Patriarch Kirill’s primatial address was followed by the awarding ceremony. The awards of the Russian Orthodox Church were presented to those who rendered help and assistance to the construction of the Church of All Saints in Strasbourg.

After the Liturgy His Holiness went to see the church complex and visited the Religious and Cultural centre located near the church. Children from the Sunday school congratulated the Primate of the Russian Orthodox Church on his Nameday which he celebrated the day before and sang a hymn to Ss Cyril and Methodius. 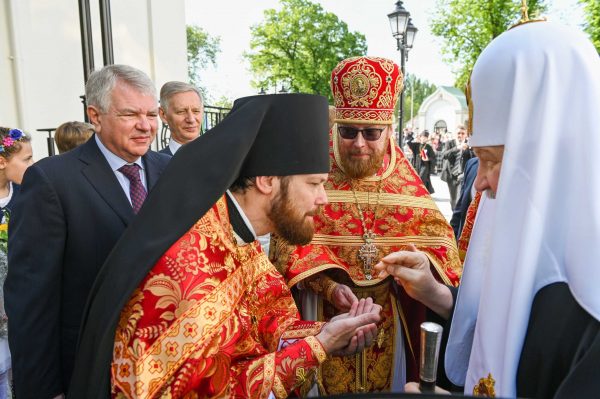 ***
The Church of All Saints has become a cultural site of Strasbourg like Russian churches in Paris, Nice and Cannes. Some people call it ‘a pearl of Strasbourg’ or ‘a white swan of Strasbourg.’

At first members of the parish gathered in a small premise at the downtown. It still accommodates the French-speaking Orthodox community of the Moscow Patriarchate.

After the visit of the Primate of the Russian Orthodox Church to Strasbourg in 2017 a long process for receiving a plot of land began.

On 7 December 2013, a prayer service was celebrated for the beginning of construction in the presence of Strasbourg Mayor and representatives of the Council of Europe.

On 31 September 2014, the first foundation stone was laid with the blessing of His Holiness Patriarch Kirill by Archbishop Mark of Yegorievsk (now Metropolitan of Ryazan and Mikhailov) who was the head of the Moscow Patriarchate’s Administration for institutions abroad.

On 19 May 2017, the Religious and Cultural Centre was opened which was built during three years on private donations. Cutting the red ribbon were Strasbourg Mayor Ronald Ries and Hegumen Philipp (Riabykh) who performed the blessing of the parish house on the Feast of the Ascension, 25 May 2017.

On 23 December 2018, the Lesser Blessing of the new church was celebrated with the blessing of His Holiness Patriarch Kirill by Bishop Nestor of Korsun (now Archbishop of Madrid and Lissabon). Since then the community has attended divine services at the new church.