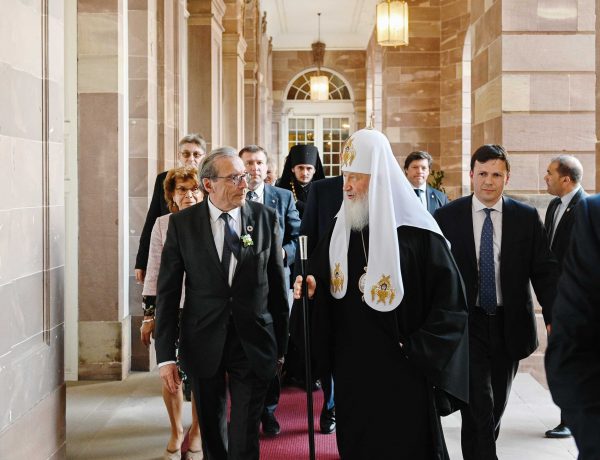 On 26 May 2019, His Holiness Patriarch Kirill of Moscow and All Russia met with the Mayor of Strasbourg, Mr. Roland Ries.

Earlier that day the Primate of the Russian Church consecrated the Orthodox Church of All Saints in Strasbourg.

Addressing His Holiness Patriarch Kirill, the Mayor of Strasbourg emphasized that he sees it as his task to ensure that every religious community, including that of the Russian Orthodox Church, can profess its faith in Strasbourg in the best way possible.

His Holiness Patriarch Kirill cordially thanked Mr. Ries for the hospitality extended to him and the delegation accompanying him on the visit. “I have wonderful recollections of your city which unites different epochs and cultures and which, I believe, is rightly called today the capital of Europe,” he said, wishing to the Mayor and citizens of Strasbourg help from the Lord.

As His Holiness noted, at first the process of the European integration implied the unification of Western Europe, for at the time it was difficult to imagine that the Soviet Union could take part in this process. Much has changed since then. “Today there is no Berlin Wall, no borders between Eastern and Western Europe. People are free to travel, communicate, learn about each other, and all this helps promote the most important integration – integration at a level of human relations,” His Holiness continued.

Patriarch Kirill emphasized that the Church’s primary concern is human soul. “We know that it is from human soul that good and evil thoughts come, that it is in human soul that heaven and hell, peace and aggression, love and hatred originate. No matter how hard modern sociologists are trying to downplay the role of human personality, attaching more importance to social processes, it is the human personality that lies at the core of everything. And the Church is an institution, whose primary concern is human soul. A message addressed to human personality is of utmost significance,” His Holiness added and noted the importance of personal morality which affects the spiritual and moral climate in society.

“Today we are living in a highly technological, developed, rapidly changing society, but the key role of the human being remains the same,” the Primate of the Russian Orthodox Church also said, “Therefore, appealing to the human personality, educating the human being of the 21st century is, in my view, a significant, maybe even the most significant, task.”

As Patriarch Kirill pointed out, by appealing to the human being the Church appeals to the human society. “Although today the human civilization is facing many challenges, there is still hope that the fundamental moral and spiritual values will not leave the human culture, because it is on these values that the solid and just peace can be based,” His Holiness said.