In Fairness to Herod

Archpriest Lawrence Farley | 24 December 2013
If the Christmas story has a villain, it would be King Herod.  In the passion story, the main villain would be Judas Iscariot, with possibly the High Priest Caiaphas and his Sanhedrin running a close second.  But there is no close second in the Christmas story when it comes to villains.  Herod has the field all to himself.

Even children seem to recognize this.  In the Christmas classic, The Best Christmas Pageant Ever by Barbara Robinson, the Herdman family first comes to hear the Christmas story when they force their way into the main roles at the local church Christmas pageant.  To describe the Herdmans as “secular” would be an understatement.  They were such barbarians that they made Attila the Hun look like a civilized Oxford don.  But their sense of justice and fair play remained intact.  And when they heard what Herod tried to do to the Baby Jesus and how nothing much ever happened to him by way of divine retribution, they were indignant.  So indignant that they wanted to hang him or burn him alive.  Even the Herdmans knew that Herod was a villain. 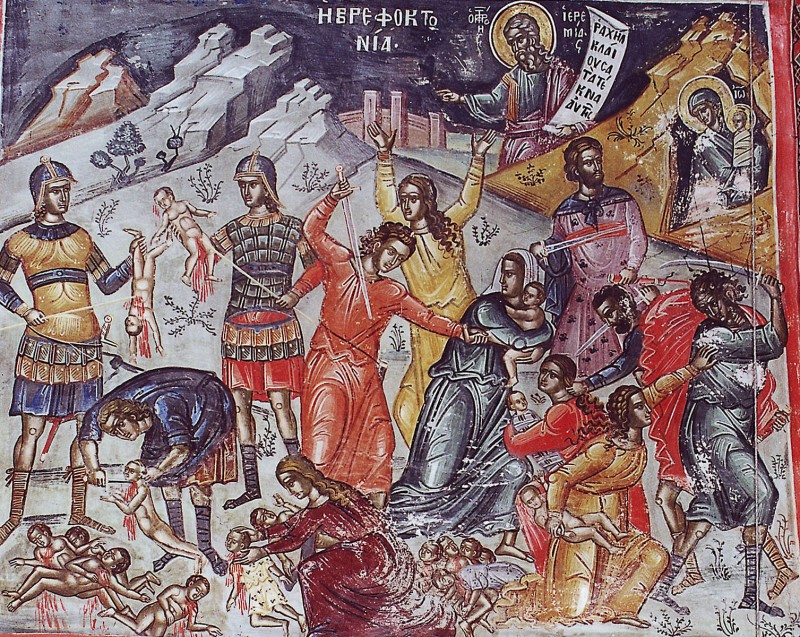 In fairness to Herod, he had more insight into the significance of Jesus than do most moderns.  Most secular people today think that Jesus and Christianity are moderately important, and Jesus is often classed with other great religious teachers.  Buddha and Gandhi are often named as being in the same class.  But Jesus and Christianity cannot be moderately important.  If Jesus’ claims are true, then His life is not moderately important but supremely important, and if they are not true then they are of no significance at all.  We didn’t need Jesus to learn of the Golden Rule.  We knew before Jesus was ever born that we should love our neighbour.  Our problem is not ignorance of the Golden Rule but our utter incapacity to begin to fulfil it.  We don’t need education so much as we need forgiveness and healing.  The one thing therefore Jesus cannot be is moderately important.  Either He is our Lord and should be worshipped, or a deceiver and should be rejected.

Or, Herod might have added, killed.  Herod saw clearly that Jesus was a threat to the existing social and political order in general, and to his own royal authority in particular.  Herod was king in Judea, and his regime and succession depended upon the political deal he had cooked up with the Romans.  There was no room for another king in this cozy situation, especially if that king might begin to act as the readers of the Prophets said He would.  Prince of Peace indeed.  One imagines that Herod had no precise theology in mind when he sent out his soldiers to kill all the toddlers in Bethlehem two years of age and under.  Did he really believe that he was murdering the Messiah?  Certainly he thought he was murdering someone who might claim to be Messiah, or whom people might later come to think was Messiah.  Theological precision was not one of his gifts.  Where he was gifted was in detecting threats to his rule.  (Maybe too gifted:  it is recorded that in his paranoia he had members of his own family murdered, including his beloved wife Mariamne.)  For Herod, detecting any whiff of threat was enough to have you killed.  If his own wife and family were not immune, a few toddlers in a small town like Bethlehem wouldn’t stand a chance.  So many were Herod’s atrocities that the slaughter of few dozen children doesn’t even show up in the stats.

But after all, Herod did have a point:  if you let Jesus live and if He becomes King, then everything is changed, and the status quo is gone forever.  History has proven Herod right.  Jesus did live, and did become King, sitting in power at the right hand of God, and the old status quo is indeed gone forever.  And good riddance to it—the status quo before Christ involved all mankind sitting in darkness and the shadow of death.  Now we can come out into the light, and live forever.  It means, of course, surrendering our hearts and autonomy to the King, and becoming His servants, and giving up once and for all the mad Herodian dream to control our own lives.  But that’s okay.  Our own lives weren’t so great anyway, and were going to end in the dust of death.  Now that Christmas has come and Jesus reigns, all will not end in death.  It will end where the Christmas story began, with peace on earth and glory to God in the highest.