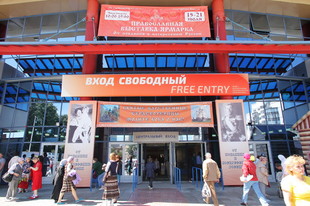 Yekaterinburg Deputy Head Sergei Tushin presided over the opening of this year’s festival, which is held under the theme, “From Repentance to the Resurrection of Russia,” Ekburg.ru reports.

The opening ceremony consisted of an introductory blessing and a longer solemn prayer conducted by clergy from Uzbekistan.

More than 250 exhibitors from across Russia, Belarus, Israel, Greece, Moldova, Ukraine and Montenegro gathered for this year’s event. Many participants are representatives of large orthodox monasteries and temples, according to Ekburg.ru.

The 2014 International Orthodox Exhibition fell on the 700th anniversary of the birth of St. Sergius of Radonezh, who is considered to be the first icon of Moscow’s Holy Trinity St. Sergius Lavra monastery.

The St. Sergius monastery honored their icon’s birth at their booth this year with special relics pertaining to him, including a royal cross that once belonged to the Romanov family, according to Ekburg.ru.