Iraq Christians in Danger in Mosul

Source: Guardian Liberty Voice
Patriarch Ignatius Yousseff Younan asked Iraqi Christians to flee the country and settle in Russia, China and the Orient, rather than the West, which he believes has betrayed their cause.
Steve Killings | 23 June 2014 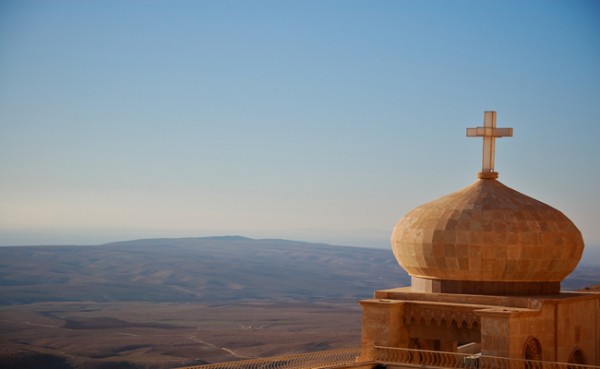 Iraq Christians who might want to return to a semblance of normal life in Mosul still face danger from Islamic State of Iraq and Syria (ISIS) militants. With the burning of one of the Catholic churches in the heart of the city, and with militants attacking Islamic cultural heritage sites in western parts of Mosul that are counter to their extremist ideologies, the danger to the Christian minority population in the region has been growing greater since the occupation.

Iraqi Christians living in Ninawa province are the largest population of religious minorities in Iraq. Prior to the American-led invasion of 2003, it was estimated that 1.3 million Iraqis followed the Christian faith. Most are Chaldean and Syriac Catholics, Syriac Orthodox and members of the Armenian Catholic church. After sectarian violence escalated in the country following the American withdrawal, most Iraqi Christians fled, principally to Germany and England. Two Iraqi Christian leaders were killed in 2007 and 2008. In 2010, Christians were targeted in attacks in Baghdad and Mosul that killed 60 people. In December of 2013, a car bomb exploded outside a Christian church in Baghdad on Christmas, killing 14 people. The population of Christians in Iraq has been dwindling steadily as a result of these attacks. It is estimated that 300,000 Iraqi Christians still remain in Ninawa province and elsewhere in Iraq.

When ISIS entered the city of Mosul, most Christians fled the danger into other parts of Ninawa province and Iraqi Kurdistan. It is thought that few, if any, remain in the city. At least 160 Christian families were registered by the United Nations Refugee Agency (UNHCR) and some 20 families are known to have sought refuge in the Monastery of St. Matthew in Bartella just outside the city. It is unclear when they will choose to return to their homes, if at all given the long history of violence against them by Islamic extremists.

On Thursday it was reported that ISIS has set fire to the 19th century Dominican church on Nineveh street in the middle of Mosul, not far from the Al-Noree Grand Mosque. The church is home to a small group of nuns, the Dominican Sisters of St. Catherine of Sienna. On Thursday, the Leadership Conference of Women Religious in the United States issued a press release in support of their Iraqi sisters, calling on the international community to pray for their safety.

Recently, the patriarch Ignatius Yousseff Younan, leader of the Syriac Catholic Church, one of the largest of the Christian denominations in Iraq, spoke out from Lebanon about the fate of Syriac Christians in the beleaguered country. He was embittered about the lack of Western protection for minority Christians in Mosul and elsewhere in Iraq, and for Western policies that he believes are bringing more violence to the region. He asked Iraqi Christians to flee the country and settle in Russia, China and the Orient, rather than the West, which he believes has betrayed their cause.

Despite the continuing sectarian violence in Iraq, it is expected that many Iraq Christians will return to Mosul and Ninawa province after the danger from the latest round of battles is over. For them, the threat from ISIS and other Islamic extremists will continue in Mosul for as long as they have a presence there.

Most viewed articles
We Are Not Saint Mary of Egypt (But We Can Still Repent)193
Orthodox Priest Rescues Two People from Fire in Constanța128
Dining with Caesar124
Athens and Jerusalem: the Role of Philosophy in Faith, with Analysis by St. Gregory Palamas115
Archbishop of Australia Attends Commemorative Events for Battle of Crete in Melbourne30
What Does Asceticism Look Like?1
Most popular authors
Archpriest Geoffrey Korz193
Aurelian Iftimiu128
Archpriest Lawrence Farley123
Eric Hyde115
Pravmir.com team29
Maria Trushanina1
Archpriest Michael Gillis1