The Irish Soldier Who Became the Orthodox Priest 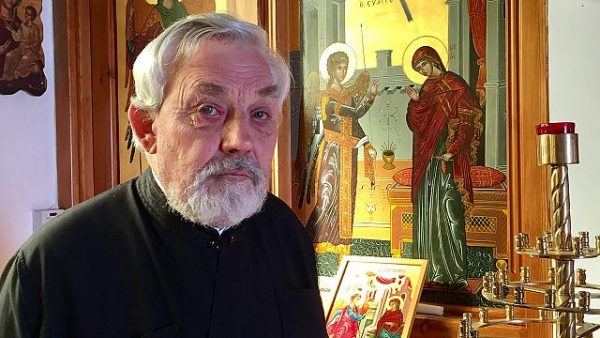 Father Thomas Carroll is a 70-year-old priest in Dublin, Ireland.

He grew up rural county Tipperary, in a family with strong military ties. His father fought in Gallipoli, while his great uncle was at the battle of Thessalonica during the first World War.

Growing up in a Catholic secondary school, he felt called to take holy orders but was told he was not ready, so he followed the family tradition and joined the military.

“We seem to be a family that was always involved militarily. There was discipline among us, but the rules were not too strict. Yet, I could never consider myself a free spirit,” he recalls.

It was while serving in Cyprus with the UN in the 1960s that Father Carroll’s life, vocation and future were set on a path that led him to a narrow brick-built church in the centre of Dublin. A church which stands out from others in the city because of richly gilded decorated screen which separates the altar from the nave, but also because it is orthodox.

To prevent its servicemen being influenced in anyway, the UN did not permit any interaction between them and either communities. However, Father Thomas could not entirely follow the discipline, that both the peace keeping forces and his family have edified him.

“I had a few acquaintances with Cypriots, but the only person that I had a lot of communication with, was a Greek orthodox priest in a village,” he recounts. Father Thomas would meet up with him on a regular basis, to talk about theology and argue regarding everything around it.

“We often could not agree on anything, but he left a lasting impression on me,” he continues.

That prompted him to explore the Orthodox religion further, but when he returned to Ireland there were only a handful of Greeks and Cypriots living in the country. They did not have an established community, so nobody could help him.

It was only when the Archbishop of Great Britain Methodios, established the first parish in Ireland in 1981, that became possible for him to talk to people with the same interest.

Prior to this he had contacted the Greek Orthodox archdioceses in London, but nobody responded to his letters. “They probably thought that I was some guy seeking only information,” Father Thomas says.

When the parish has been established by Methodios, a friend happened to mention it to him by chance. He then got around there straightaway, but it took him another 5 years before he decided to make the “big jump” and convert.

“I eventually became an Orthodox in 1986, so I do not do anything in a hurry as you see,” he jokes. “But after that, I was committed. I took early retirement from my job in 1996 and went to study theology for 5 years.”

After the conclusion of his studies, he initially served as a deacon for four years in his new parish, before eventually becoming a priest. And to him it is a vocation, not his profession.
Ultimately, it was the outward portrayal and the beautiful liturgies of the orthodox dogma, that attracted him to it. “I came from the tradition that initially the Catholic Church came from, with many similarities in liturgy and rituals. But after the Second Vatican Ecumenical Council in the ‘60s, everything changed and became more simplified,” the priest explains.

For Father Thomas, the traditional poignant ceremonies had been stripped from the Catholic faith. Services had become to some extend “protestantized” in the method of worship, minimalised. So, he realised that it was not for him.

This inevitably left a big hole in his spiritual life, that he couldn’t relate to this new situation in the Catholic Church. “This is where Orthodoxy entered my life and gave me something tangible to hold on to. Something about the church itself, its layout, the rituals even the smell of incense, would grab you straight away,” he describes.

At the time, among the Orthodox community in Ireland, there were about 20 nationalities. The original parish was founded for all orthodox Christians within the island of Ireland, regardless of any jurisdictions.

As immigration increased into Ireland, many of these new arrivals established their own communities and Father Thomas’ parish eventually became primarily Greek. The community has grown in recent years due to the increasing emigration from Greece, thus the future of his parish looks secure.

For Father Thomas, a church is a living thing and must adapt to society, rather than society adapting to it. Another reason why he admires the Greek Orthodox Church, is because it reaches out to every nationality.

“All Greek orthodox archdioceses in the UK, have up to 30% clergy that is non-Greek, thus the liturgies are commonly English speaking. Other jurisdictions like the Romanian or Russian, are operating in their language solely for their own people,” he says.

The priest believes that breaking down language and nationality barriers is very important for a modern religion, especially when attracting young individuals.

Otherwise they could be at the mercy of fundamentalist evangelical churches, while others may become attracted to radical Islam. “They are giving them something to live for, when often they have nothing,” claims Father Thomas.

He is the only one who converted to Greek orthodoxy in his family. “It did not make any difference to most of them, but I think today they would be happy with my choices,” he says.

“If you asked me how Ireland is responding to a church of different dogma about 50 years ago, there would be quite hostile reaction to it. Now nobody cares. At the last count, there were about 130 different religions the country, most of them established during the past 15 years,” Father Thomas explains.

About 50% of those are ethnic African churches. “But the people of Ireland are accepting all religions in their country now. Maybe the reason is that most of them do not go to the church themselves,” he continues.

“Young people particularly, who are carrying on the catholic faith in Ireland, have absolutely no animosity to anybody outside this tradition,” he concludes.

Father Thomas is one example of a man, who did not just follow a religion due to family, community or national traditions. He researched, reached out and when the time was right, he found what was best for him. 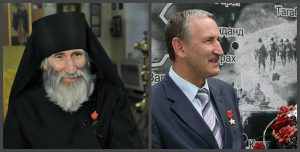 Monk Kyprian: Being in Battle Is…
Valeria Mikhailova

How a Hero of the Soviet Union Became a Monk