A Soviet Monk. Alypy the Soldier.

Natalya Mihailova | 08 May 2017
On the eve of Victory Day we remember Archimandrite Alypy (in the world, Ivan Mikhailovich Voronov) (1914-1975), Abbot of the Pskov-Caves Monastery. Archimadrite Alypy from 1942 was on the fronts of the Second World War. Followed the path of war from Moscow to Berlin as part of the Fourth Tank Army. On May 12, 1950, became a novice of the Trinity-Sergius Lavra (Zagorsk). From 1959, abbot of the Pskov-Caves Monastery. Returned monastery valuables from Germany. Conducted enormous restoration and icon-painting work in the monastery. 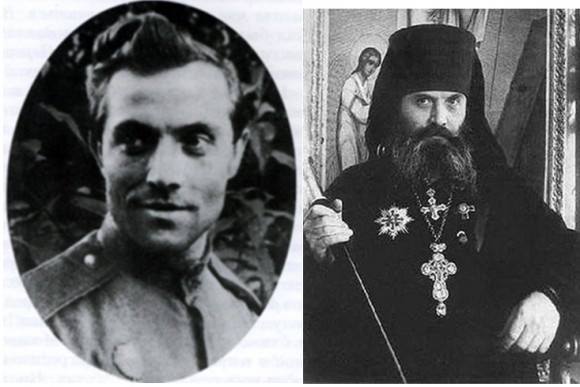 The young artist Ivan Mikhailovich Voronov followed the bloody trail of war the entire way from Moscow to Berlin with a rifle on his right shoulder, a sketchbook and set of paints on his left.

The artist returned safe and sound from the war.  He never could have imagined that he was destined to rebuild the Pscov-Caves monastery and return a precious sacristy there.  Not long after Voronov took his monastic vows.  He supervised the restoration works of the Trinity Lavra of St. Sergius near Moscow for ten years.

Art critic Savva Iamshikov says, “People would often ask me why such a handsome man became a monk?  People around talked about how he had been badly wounded and could no longer have children…  And then, one time, he himself brought up this subject and said, ‘Savva, that is only idle talk!  It’s just that the war was so horrible, so dreadful, that I promised to myself that if I survived I would become a monk and would fight against any future wars.’”

In the spring of 1960, life got very busy at that monastery.  Scaffolding was put up all around the crumbling ramparts and towers.  Workmen prepared the mortar and the limestone tiles for the restoration of the lost fragments of the monastery ramparts.  Abbot Alypy himself could be seen on top of the scaffolding with a trowel in his hands alongside the workers.

They remember Father Alypy well not only in the Pscov-Caves monastery, but in the Tirinity Lavra of St. Sergius as well.  An artist by training, throughout his entire life he was also an avid collector of paintings and other works of art.  Today, decades later, we may justly call father Alypy the “Tretiakov” of the Pscov Caves not only because of his collection of paintings and masterpieces of arts and crafts, but also because of his generous contribution to the museums of Russia.  The collection of wonderful paintings and graphics became his life’s work.  It was divided between three museums: the Russian Museum, the Pscov Urban Conservation Area, and the Pscov Regional History Museum.

Father Alypy was a complex, many-sided person.  He died on March 12, 1975 during Cheesefare week.  His passing was announced by the tolling of the big bell.  He had lived for sixty-ones years on this Earth. Of these, twenty-five he spent as a monastic, experiencing many spiritual joys as well as great sorrows during those days.

Translate from the Russian by Maria Nekipelov