Is it Possible to Live a Monastic Life in the World? 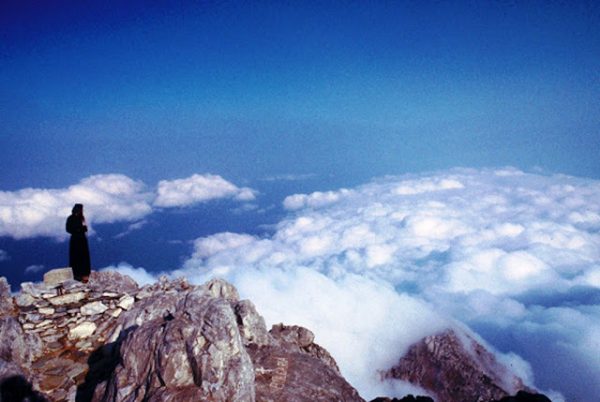 Question: I want to give my life completely to Christ, but do not want to go to a monastery. Is it really necessary to be in a monastery to lead a monastic life? Can’t I live as a monastic in the world?

This is a question that comes up quite often, except that it is usually in the form of a statement. May God bless your humility in asking this instead of informing and declaring that a monastery is not necessary for one who desires a monastic life!

First, you must realize that God’s grace is present everywhere, but it is especially felt in a monastery. When people visit a monastery, they feel that it is a holy place where God is present. Paradoxically, the monastics who dwell in that monastery more often feel the intense spiritual warfare that the evil one is waging against them. When visitors came to one monastery and said to one of the nuns, “It is so peaceful here,” she replied, “You feel the peace, we see the warfare.” 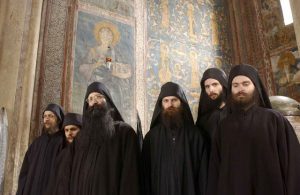 Anyone who strives to fulfill the Gospel commandments, who tries to live truly according to the teachings of the Church, feels both of these aspects to some degree: both the grace of God in their lives, but also the intense battle that the devil and his legions wage against him. The more intensely we strive to serve God, the more the evil one seeks to deter us from our path. This is most true in the life of one who renounces the world and seeks to live completely for Christ.

So, can this be done while living in the world? Yes. And no. One can certainly, with God’s help, live according to the Gospel commandments and the teachings of the Church in the world, maintaining a job, being faithful in the Church, living according to the “little holy trinity” of prayer, fasting and almsgiving, reading the lives of the saints and other soul edifying books, etc. This is all what the Church requires of all her faithful. This is all according to the commandments. Such a person may participate in some “worldly” activities which are not harmful—certain and limited sports, wholesome entertainment, etc., without losing his focus on God.

The monastic life takes in what the fathers refer to as the “Evangelical advice.” Remember the rich young man in the Gospel who asked the Lord, What must I do to inherit eternal life? The Lord told him to keep the commandments, which the man stated that he had done since his youth. Then the Lord said, if you want, sell all you have, take up your cross, and come, follow me (Mark 10:21).

If you want!!! In other words, it is not mandatory for salvation to give up everything, only “if you want” These were the words which St. Anthony heard and which led him to begin his monastic life. We know that his early monastic life was spent at first with an elder on the edge of the town, and that later he went off into the desert.

The world holds many temptations for us. Some of the pleasures of worldly life are not bad: marrying and having children are certainly blessed by Christ who worked His first public miracle at the wedding of Cana in Galilee. Being with other people—even those who are not of our faith—is not bad in itself, but it can lead one down a wrong path if one is not careful. Certain entertainments, as we mentioned above, are not bad in themselves, as long as they do not become passions. But the monastic is the one who chooses the narrower path. In order to follow this path, he must have others who are experienced in the dangers, pitfalls and perils along the way. You can find this only in a monastery with others who are struggling (while falling and getting back up again) on that same path. 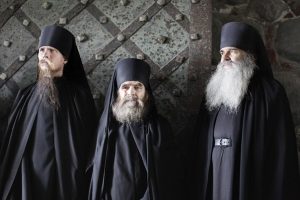 If you are trying to walk that narrow path in the world with all its temptations and you fall (and you will fall), who will help to lift you up again? More than likely, those who are falling in the same pits as you will encourage you to remain and wallow in the mire. In the monastery, not only do you have the more experienced who can guide and reprimand you when you stray, but that great grace from God also surrounds you and assists you in these struggles. The very monastic garment itself is holy and guards the monastic.

Let’s take an innocent example to illustrate how important the habit is: Let’s say you are driving through a rather desolate area and are very thirsty. You come upon a small settlement that has a few houses and a bar, but no gas station or grocery store or other place where you could find a cup of coffee or soft drink or tea. (There are many such towns in the west!) You stop your car and go in the bar to get a non-alcoholic drink. There is nothing wrong with that in itself. Yet when you are saying your prayers, you remember the things you saw in the bar, perhaps lewd jokes, inappropriately dressed people, etc. Even though you did nothing wrong, still, your prayer is disturbed by these remembrances.

The monk or nun who would be traveling along that same road and who is equally thirsty would not go into such an establishment. The habit itself would be as the walls of the monastery protecting him from doing so, for as innocent as his intention would be in wanting a glass of ice tea, he could not bring scandal upon the Church by going into such a place.

There is another pitfall which catches everyone who tries to live the monastic life in the world. Pride. This is not to say that pride does not assail those in the monastery! It certainly does, however in the monastic setting, when one begins to fall into pride, there are elders who are quick to cut off that sin in the novice. You are not somebody in the monastery because you are fasting and praying—everyone is doing that! You are not considered as “pious” because you struggle to obtain the virtues—that is what is expected. But when you say, “I can lead the monastic life in the world and not bother going into the monastery” you are declaring already quite pridefully that you already know it all! Then, instead of all your efforts going toward your salvation, you will have lost everything.

There is no question that there are monastics who live as anchorites. That life cannot be compared to what you are requesting. Those who live such a monastic life do so only after many years in a monastery and only with the blessing of their monastic elder. When a brother would ask Elder Cleopa for a blessing to go off into the forest alone to live, the Elder would tell him, “after you have been in obedience for thirty years, then come back to me and we will think about it!”

Do not dismiss that grace which works invisibly in the monastery. It is very powerful and without it no one in a monastery would be saved. The holy fathers say that when you are saved you are saved in community; but when you fall, you fall alone.