Priest Philipp Iliashenko: The Pan-Orthodox Council Ought Not to Resemble a Congress of the Communist Party 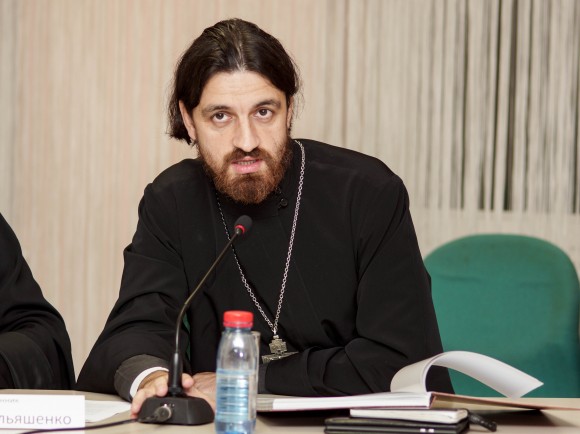 The situation surrounding the Great and Holy Pan-Orthodox Council seems to stem directly from everything that came before it.  In the whole course of the history of the Universal Church there has never been a practice similar to the one Patriarch Bartholomew is trying to impose on the local Churches.

Let’s start with the small issues.  Never and nowhere did anyone use or accept the title “Ecumenical” in addressing the Patriarch of Constantinople. The title was used exclusively in diplomatic correspondence, and then only out of courtesy.  Yet Patriarch Bartholomew insists upon the usage of this title.  However, it’s not just about trifles like that, but about essentials.

The Holy Great Pan-Orthodox Council is preparing to initiate its proceedings, but from the very beginning the groundwork that is prepared for the proceedings makes us question not only whether the Council is Universal and Inclusive of all the Orthodox, but also whether it is actually Conciliar.

First of all, not all Bishops of all the local Churches are invited, which is in itself an unprecedented case, according to the practice of Ecumenical Councils. Secondly, even the Bishops invited to the Council as part of the delegation from a local Church do not have the right to vote.  It is only the local Church itself that has voting rights.

It turns out that if one of the ancient great local Churches currently has only a small flock and only a small number of bishops, it still has the same vote, holds the same importance, as, for example, the Russian Orthodox Church with its innumerable flock and numerous Bishops.  That is to say, the regulation of the Council is from the very outset discriminatory towards Churches with a higher number of Bishops and flock.

Thirdly, current events show that the Patriarchate of Constantinople is using the idea of their own administrative and jurisdictional primacy, supremacy even, as groundwork for this high-level assembly.  And, as mentioned before by experts in this question, there are many similar issues in the intended work of the high-level assembly.

I will give you the simplest of examples.  Reports of the conciliar decisions are to be made to the Primates of the Churches and to be passed on to their fellow Hierarchs and their flock by special letters from the First Hierarch of Constantinople who is to preside at the Council. It means that a venerable Primate, having been sent by his flock (which, for example, in the case of Russia, numbers several million) and by his Bishops to this meeting, and returning home prior to the arrival of the said letter, cannot even, as the Church regulations prescribe, inform his fellow Hierarchs, cannot even tell his flock of what took place there, of what decisions were made there.  He is supposed to wait until the Patriarch of Constantinople deigns to convey his permission by means of a special letter.

It seems to me that corresponding issues have predetermined the current situation.

It is also worth mentioning that the documents submitted to the Council gave rise to a wave of criticism, which actually put the unity within some of the local Churches at risk.  What kind of Pan-Orthodox unity, which the intended Holy and Great Pan-Orthodox Council is supposed to affirm, can actually be proclaimed from the height of the cathedra of the Church of Constantinople if there is a refusal to listen to the voice of God’s people, to the voice of the theologians and of the spiritual fathers, respected in the whole world, who repeatedly express their concern and their doubts as to the need for certain phrases in the prepared documents?

Staying Away from Conspiracy Theories

Universal Orthodoxy should be particularly grateful to His Holiness Patriarch Kirill who insisted, during the conference of the Primates of the Orthodox Churches in Chambésy, that all documents to be submitted for discussion at the Council be published, so we all could review them. That removed a certain “conspiracy theory” effect.

In addition to the fact that documents were published and people were able to discuss them openly in the media, we know that in the Russian Orthodox Church, as well as in other local Churches, special panels conducted open discussions of these documents (for example, scientific and practical conferences were convened to discuss misgivings and expectations of the proposed Council).

I think it is extremely discourteous towards their fellow Archpastors and to God’s people to say to them something along the lines of, “We have already discussed the documents, so we’ll simply bring them to the Council and accept them.”  The Council then seems to turn into some kind of convention of the Communist Party where the Political Bureau makes all the decisions and everyone else unanimously votes for it.  Shouldn’t the procedure for the discussion of Council documents be different?  Strictly speaking, the Council is, in fact, able to introduce changes into the documents, provided there is a consensus, which is practically impossible, as they are planning to discuss subjects that are extremely sensitive for the faithful.

For example, the attitude towards the heterodox.  The document does not clearly specify that the fullness of the truth exists only in Orthodoxy.  So people start worrying: does that mean that we accept that fullness and truth can also exist somewhere else, somewhere outside of Orthodoxy?  Does that mean we accept that we are not the only Holy Apostolic Church?

We understand that the people in Church are often inert and passive, that they require time to be able to process some ideas and to express their opinion.  Thankfully, owing to the Russian Orthodox Church, conciliar documents received a wide exposure; feedback was received; some suggestions were made.  And what do we hear in return?  No comment.  No changes.  All documents are to be presented to the Council in their present form.

Consequently, it seems that, for the reasons stated above, this convention was never an Ecumenical Council, nor can it be.  A Council is a gathering of Bishops.  While a gathering of delegations is a Bishops’ conference, a Bishops’ meeting.  That is the practice.  In places where canonical territories of different Churches intersect, Italy, for example, Bishops’ conferences used to take place before and take place now.

So it’s not actually Ecumenical, is it?

The Holy Great Pan-Orthodox Council is the name assigned to the planned gathering.  It seems that the phrase “Pan-Orthodox Council” in this context may be perceived as synonymic to “Ecumenical Council.” And, in my opinion, the gathering in question was originally conceived as pretending to be one.  Meanwhile, contrary to the opinion of many of the Primates, representatives of the local Churches and the Russian Orthodox Church in particular, not all Bishops were invited under the pretext that Constantinople could not accommodate all of them.

They received a reply that, being a megapolis, Moscow could accommodate everyone, because, unlike in Istanbul, there is actual freedom.  A clergyman may, for example, walk around freely in his clerical attire; clerics can assemble in any number.  There are many resources in Moscow, many squares; there is an Orthodox president who could have served as the host party.  However, this suggestion was dismissed.

When, one by one, the local Orthodox Churches began withdrawing from participation in this Council, our Hierarchs offered, “Why don’t we meet again to discuss everything before it becomes too late?  Why don’t we hold a Pan-Orthodox meeting (like the one in Chambésy)?  The situation is obviously a difficult one, let’s discuss everything.”  For without all the local Orthodox Churches there can be no Pan-Orthodox Council anyway.  Especially without the Russian Orthodox Church which is larger than all the other local Churches put together.  The Patriarch of Constantinople answered in a very intricate fashion, but the meaning of the answer is clear – we’ll manage without those who don’t want to attend.  However, that would make it a Pan-Greek Council.

On the Questions of the Unity and of the Personal

I think that there is absolutely no basis for the continually voiced concerns that all the pre-conciliar adversities demonstrated how nonunited and disparate the Orthodox people actually are.

Ecumenical Councils convened to decide upon issues concerning the teachings of our faith, they overcame heresies.  The question arises, for what purpose does the current Council convene?  Is it to affirm the primacy of the First Hierarch of Constantinople?  Or is it to cause a schism in Pan-Orthodox unity?

Pan-Orthodox unity does not occur during administrative meetings or Bishops’ panels or laymen’s gatherings.  Pan-Orthodox Unity is the Communion of the One Body and One Blood of the Lord Jesus Christ.  And we continue to commemorate each other, to pray for each other.  We can walk into a church of any of the local Churches and commune freely.

Can there be a loftier unity?  And adversities are the norm, for we live here, in our sinful world, continually confronting the fallen human nature.  Cannot the same adversities occur even within the most loving family?

While we are united in essentials, differences can exist in incidentals as long as there is love.

Ecumenical Orthodoxy is united, while the possible disagreements are a personal matter.