ISIS barbarity: How 100,000 Christians fled Mosul in ONE NIGHT

Source: Express
A PRIEST who was captured and tortured by Islamist terrorists has today lifted the lid on Islamic State's (ISIS) horrific persecution of Christians
Nick Gutteridge | 21 October 2015 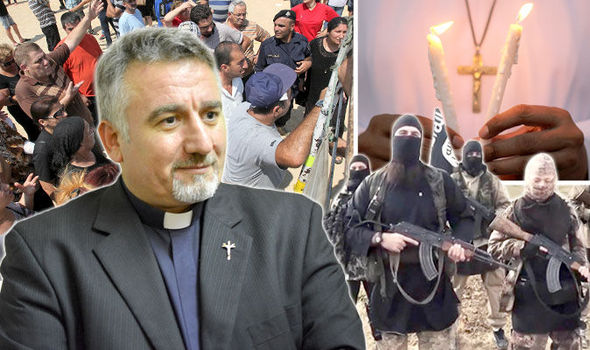 Father Douglas Bazi revealed how 100,000 Christians fled the Iraqi city of Mosul in one night after the jihadi fanatics embarked on a “genocidal” campaign of ethnic cleansing.

Giving a shocking insight into life under ISIS rule, the clergyman told Express.co.uk how the Christian population of Iraq has been decimated from a high of two million in 2003 to just 180,000 today.

He also revealed how jihadi fighters summarily torture and kill the families of those who speak out against them and regularly use girl sex slaves to pay for basic services including medical care.

Mosul’s entire population was given a 24-hour ultimatum to either convert to ISIS’s radical brand of Islam or face beheading when the terror group captured the city in June last year. 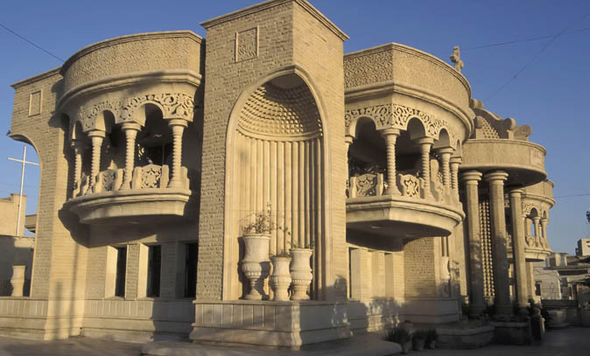 As a result 100,000 penniless Christians fled in just one night, leaving behind their homes and possessions to be looted by jihadi fighters.

Those who stayed behind had to pay a Jizya – an Islamist tax levied on non-believers – amounting to an astronomical £5,200, which is more than the yearly salary of the average Iraqi. Those who could not afford the levy were executed.

“At least 1,800 Christians have been killed since 2003 in Iraq. That’s why the people are afraid.

“Overnight 100,000 people escaped from Mosul and escaped from ISIS. When they arrived and took over Mosul they told the people we have three conditions according to Sharia.

“Number one was convert.

“Third, they said you have to leave or you will be beheaded.”

He revealed how 5,000 Christian families have fled Iraq in the last year alone, and said the few who survived under ISIS rule in Mosul told shocking tales of the depravity of their overlords.

In one case he recalled how a jihadi fighter forced a dentist to accept a girl sex slave as payment for his medical treatment. 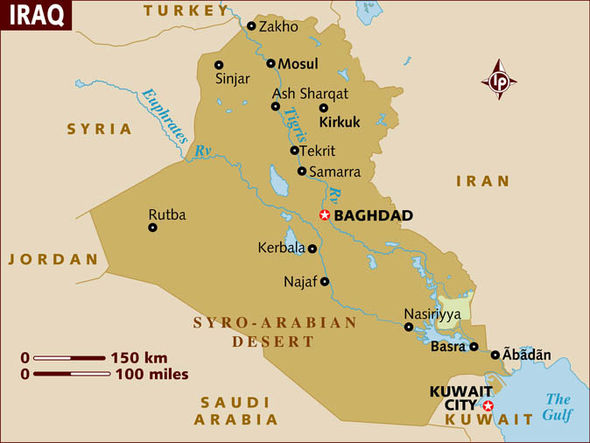 Father Bazi said: “The dentist helped him and the man told him he would come back to pay him. The dentist said he didn’t have to, but the man insisted he did because it was Sharia.

“After a couple of days he came back and he brought him a Yazidi girl and said ‘this is your reward’. If the dentist refused her, he was going to shoot him, so he took the girl and managed to reach her family.

“When he told the family ‘I have good news for you, your daughter is here how can I bring her to you’, he was shocked because the family told him she was not a virgin anymore, so keep her, we don’t want her.

“This girl, how can she live anymore when she is not wanted by anyone? If you look at the minority in Iraq, this girl is symbolic of our life.”

The Christian pastor also revealed some of the horrific personal stories which unravelled amid the panic when ISIS captured the city, which was Iraq’s second biggest. 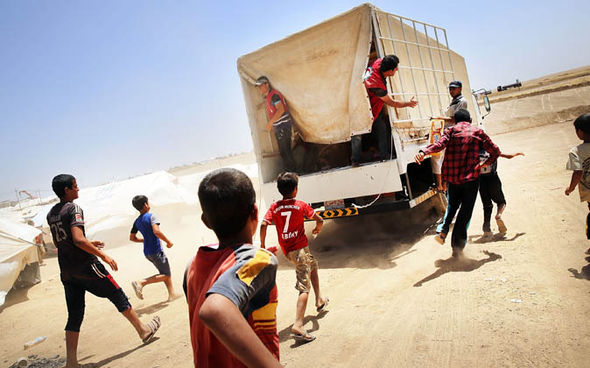 100,000 Christians fled the Iraqi city of Mosul in one night

He said: “There was one lady who went to the mosque to negotiate with ISIS – she said I went there and I told them ‘I have my mum, she’s old’ and another member of the family was handicapped.

“She said ‘we can’t leave so can you look to us as a mercy?’ And they told her there are no exceptions to anyone, the law is over all, this is Sharia.”

Father Bazi also revealed how Muslims quickly turned against the Christian neighbours they have lived with for years after ISIS swept to power.

He revealed one shocking instance in which one man told his Christian neighbour of 30 years that he would kill him if he did not leave town immediately because he wanted his house.

He said: “The Muslim guy, he went to the Christian’s door and knocked and said ‘did you hear about the decree, the announcement is to leave in 24 hours by Allah’s name, and if I see you here tomorrow I’m going to kill you because I have the right to take your home’.”

Another woman, called Rawnaq, had to leave her father behind in an ISIS-controlled town near Mosul and has not heard from him since.

However, he said that many Christians were terrified of speaking out about the “genocide” being committed by ISIS because they fear the jihadis will seek revenge on the friends and family they had to leave behind.

He said: “Anyone who says anything outside, the other members of their family inside Iraq will pay for it. 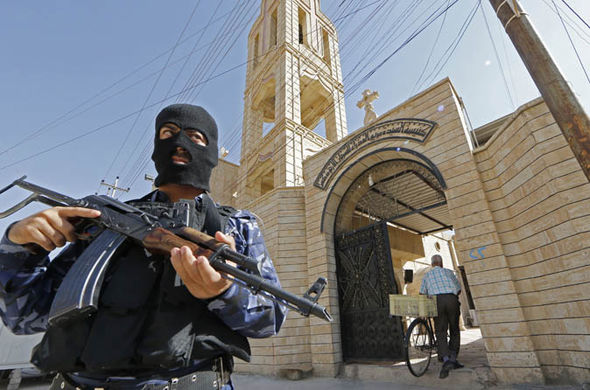 An Iraqi security officer, stands guard outside the Church of the Virgin Mary in Mosul in 2012

“My people, they are going to leave sooner or later. I’m in love with my country, with my church, I’m proud I’m Iraqi but Iraq isn’t proud because we’re part of it and it’s a shame.

“There’s no life left behind for us now.”

He said Mosul is run by two rival “gangs” of ISIS fighters – one group from Iraq and another from Chechnya in Russia. The priest also said there are around 600 Britons in the region fighting for the jihadis.

Father Bazi was speaking to Express.co.uk during a visit to Britain to highlight the plight of Christians in the Middle East.

The priest – who belongs to the Chaldean branch of Christianity – was captured and tortured by al-Qaeda whilst walking home from a mass in Iraq in 2006.

He has since gone on to found centres for displaced Christians in a safe-zone in northern Iraq where more than 1,200 people – many of whom fled Mosul – are now living.

The Iraqi nation, originally from Baghdad, said that the persecution of Christians in the Middle East is a “genocide” which will soon wipe the religion of the map in the region.

And he revealed why ISIS are the most extreme and dangerous branch of radical Islam to emerge in his lifetime.

He explained: “ISIS are the third generation of radical Islam. The first was al-Qaeda.

“If al-Qaeda saw an American soldier and he was distributing candy to the kids, the al-Qaeda sniper is forbidden to shoot him because the kids might get hurt.

“[Former al-Qaeda leader] Musab al-Zarqawi was the second generation. He said don’t worry, shoot him and if you’re going to kill the kids don’t worry about them because those kids are going to be angels in heaven.

“The third generation is ISIS. They said kill the Muslims, not just the infidels. They started with killing the Muslims that aren’t according to Sharia, so imagine how they look at us.”