Source: WND.com
Leo Hohmann | 02 June 2015
A 1,650-year-old monastery in northern Iraq, one of the oldest Christian monasteries in the world, is in danger of falling to ISIS. 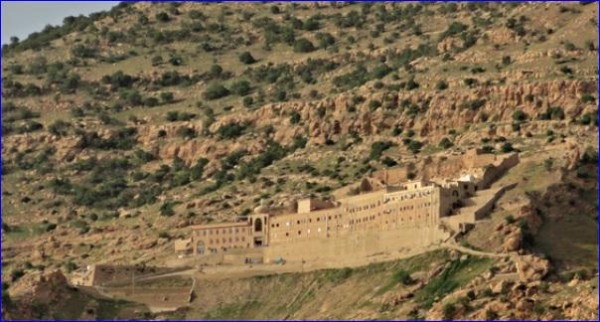 St. Matthew’s Monastery is a 1,650-year-old structure built into the side of a mountain on the Nineveh Plain of northern Iraq.

It has served as a place of refuge for persecuted Christians and other religious minorities for centuries, but now its very existence is threatened.

Some of the earliest Christians sought safety there. And when Islamic hordes stormed the city of Mosul, just 20 miles away, last June, the monastery’s thick stone walls again became a safe haven.

Located about 20 miles north of Mosul, the monastery is in protected Kurdish territory but is just a little more than three miles from the front lines of battle.

“We can see the battles and the airstrikes from here in front of us, especially at night. The sky lights up at night, but we of course are not scared. God protects us,” Father Yousif Ibrahim, one of three monks who resides in the monastery, told USA Today. There are also six students living at St. Matthew’s.

Before Iraq fell into chaos, the monastery was home to thousands of nuns, priests and students with the Syriac Orthodox Church. The ancient church traces its founding back to the time of Christ. Some of its earliest founders may have personally known Jesus Christ. They still speak Aramaic, the language of Jesus.

It houses one of the most ancient Christian libraries in the region. Many of the oldest manuscripts have been removed and taken to Kurdish-controlled areas.

Christian refugees running out of places to hide

More than 125,000 Christians have been forced from their homes over the past 12 months. They now live as refugees, most of them in the semi-autonomous state of Kurdistan.

ISIS has previously vowed to destroy all Christian historical sites in the areas that fall under its control. In March, it destroyed the ancient Christian Mar Behnam Monastery in the predominantly Christian town of Qaraqosh in northern Iraq.

The jihadists have desecrated Christian cemeteries, seized Christian girls for sex slaves and killed other children in front of their parents’ eyes.

ISIS destroyed Jonah’s tomb in Mosul in July and destroyed countless Assyrian artifacts in Nimrod in March. The jihadist organization believes Christian relics represent a religion of polytheistic infidels and are an affront to Islam.

St. Matthew’s is built like a fortress into the side of Mount Al-Faf. Kurdish soldiers pushed the ISIS fighters back last summer to about four miles from St. Matthew’s, but the monastery is again in danger of falling to the Islamic jihadists

On CBS’ “60 Minutes” in March, Father Ibrahim told Lara Logan the worst part was the uncertainty.

“We don’t know exactly, but we are expecting the worst,” he told Logan.

Mosul has been completely emptied of its 10,000 Christians.

Nicodemus Sharaf, the archbishop, now lives as a refugee in Kurdish capital of Erbil along with 60,000 other Christian refugees.

When he left Mosul, Sharaf said ISIS fighters were already inside the city.

“I don’t have time to take anything. He told me you have five minutes. I took just five books; they are very old.”

Many even older were left. Christian relics dating to the first century B.C. fell into the hands of ISIS.

ISIS uses the Arabic letter “N” for Nazarene to mark the homes of Christians. When they use red paint to put the “N” on a home, the occupants can expect a visit soon by ISIS fighters. They are given a choice: Convert, pay the Islamic head tax or die.

“They lost our dignity here. I’m sorry to say that. We don’t have dignity in our country, in our land.”

President Obama’s airstrikes are seen as pinpricks on ISIS.

Archbishop Bashar Warda, who leads the flock of the Chaldean Catholics in Erbil, told Logan ISIS “is a cancer” that needs to be defeated.

Logan asked if that meant militarily.

“Please God,” he said. “It’s a disease, so sometimes you take some hard measures, unfortunate measures, to remove this cancer.”

In its heyday, St. Matthew’s monastery was home to 7,000 monks. The area surrounding the complex was named Al-Faf, meaning “the thousands,” in homage to the legion of monks who worshiped, taught and studied on its steep dry slopes, USA Today reported. “But just like the Christian population in Iraq, that number has dwindled dramatically over the years.”

Islamic jihadist groups have systematically targeted Christians over the past century, and ISIS is only a continuation of that long history, Ibrahim told the newspaper. Despite holding fort at the monastery, Ibrahim says St. Matthew’s, and Christianity in Iraq, are living on borrowed time.

Iraq’s Christians will eventually abandon the nation, Ibrahim said, leaving their history behind. Only then will he consider fleeing the war-torn country himself.

“The shepherd cannot leave his sheep,” he told USA Today.

“Saint Matthew ended up here because he was fleeing persecution, but persecution follows us,” Sahar Karaikos, one of the six students still at St. Matthews, told the newspaper. “We can’t run from it, we have to stand in front of our history.”