January 17 is “Sanctity of Life Sunday” 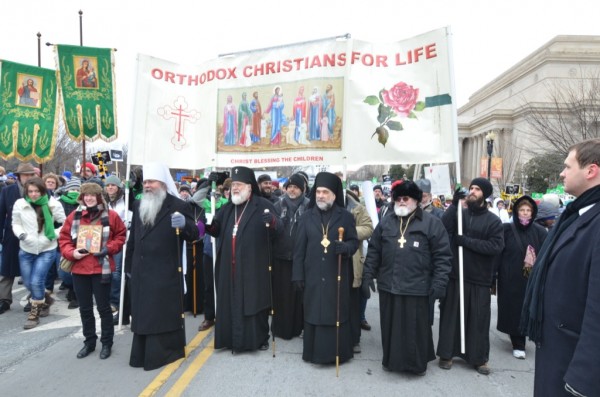 January 17, 2016 will be observed as “Sanctity of Life Sunday” in parishes across the US.  Special liturgical petitions and prayers are available on the Prayers for Orthodox Christians page and in PDF format.

The day serves as a prelude to the annual March for Life, marking the 43rd Anniversary of the Roe v. Wade decision that legalized abortion in the United States, in the US Capital on Friday, January 22.  As in past years, Orthodox Christians from across the country will gather to proclaim the sanctity of God’s precious gift of life and to remember the millions of victims abortion has claimed over the past four decades.

His Beatitude, Metropolitan Tikhon will be among the Orthodox Christian hierarchs, clergy, seminarians and faithful participating in the annual March for Life in the US Capital on January 22.  Among the other members of the Orthodox Church in America’s Holy Synod of Bishops expected to participate are His Emimence, Archbishop Benjamin; His Eminence, Archbishop Melchisedek; and His Eminence, Archbishop Michael.  As in years past, students from Saint Tikhon’s Seminary, South Canaan, PA and Saint Vladimir’s Seminary, Yonkers, NY, will be among the marchers.

Orthodox Christian marchers are asked to gather before noon at 17th Street NW and Constitution Avenue—look for the iconic “Orthodox Christians for Life” banner and signs.  The pre-March rally will begin at noon with an opening invocation by His Eminence, Metropolitan Evangelos of the Greek Orthodox Metropolis of New Jersey.  At the conclusion of the program, participants will make their way to the US Supreme Court.  At the end of the March, Metropolitan Tikhon will offer prayers for those who have fallen victim to abortion.

On Friday evening, January 22, a two-day retreat titled “Pro-Life is Pro-Woman” will begin at 4:00 p.m. at the OCA’s Saint Nicholas Cathedral.  Topping the list of speakers will be Khouria Frederica Mathewes-Green, who will be joined by Archpriest Chad Hatfield, Chancellor of Saint Vladimir’s Seminary; Archpriest Eric G. Tosi, OCA Secretary; and Hierodeacon Herman [Majkrzak], Liturgical Music Instructor at Saint Vladimir’s Seminary.  While especially geared toward young adults and college students, the retreat will be open to all.  Detailed registration and related information is available on the OCA web site.

Metropolitan Tikhon and the hierarchs also will attend Friday’s annual Rose Banquet, slated to be held at the DC’s Downtown Renaissance Hotel at 6:00 p.m..  Pro-Life representatives from all 50 states and abroad are expected to be present.

In related news, His Grace, Bishop Paul will deliver the opening prayer at the 11th annual “March For Life Chicago” on Sunday, January 17 at 2:00 p.m.  This year’s March is expected to attract over 10,000 individuals.  Marchers are asked to gather at Federal Plaza at 2:00 p.m. for the pre-March rally.  Additional information may be found on the web site of the Diocese of the Midwest.