Metropolitan Hilarion: Patriarch Bartholomew is Not Free in His Actions 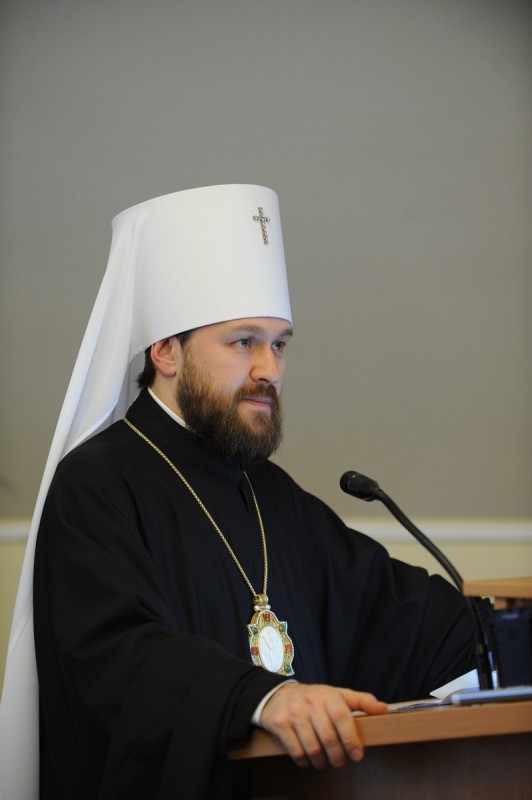 On October 27, during ‘The Church and the World’ program aired by Russia-24 TV channel on Saturdays and Sundays, Metropolitan Hilarion of Volokolamsk, head of the Moscow Patriarchate department for external church relations, answered questions from its host Ekaterina Gracheva.
E. Gracheva: Good afternoon! This is ‘The Church and the World’ program in which we talk with the chairman of the Department for External Church Relations of the Moscow Patriarchate, Metropolitan Hilarion of Volokolamsk. Good afternoon, Your Eminence!

E. Gracheva: A few days ago in the Vatican, you met with Pope Francis of Rome. At present, the dialogue between the Russian Orthodox Church and the Roman Catholic Church appears to be quite developed. What can explain the more frequent contacts with the Roman Catholic Church today? Are those right who say that Western Christians are now closer to us than our brothers from Constantinople?

Metropolitan Hilarion: The relations between the Russian Orthodox Church and the Roman Catholic Church have received a new impetus for development after Patriarch Kirill met with Pope Francis in Havana two and a half years ago. I should say that before that meeting, the contacts were held on a regular basis as well. I would not say that they have become more frequent.
During Pope Francis’ pontificate, I met with him 7 times, that is, on average I meet him once a year. Usually it takes place in autumn, also because in autumn the Synod of the Roman Catholic Church holds its meetings to which observers from several Orthodox Churches are invited. For many years now, I have come there as an observer from the Russian Orthodox Church.
Usually, I come for one or two days. I am given 10 or 12 minutes to set forth the Russian Church’s point of view on a particular topic, as, indeed, we have a regular students exchange, groups of staffers or priests come to us from the Vatican and we send our staffers or priests to the Vatican. For a third year now, we have held two weeks-long Summer Institutes at the Church Institute for Post-Graduate and Doctorate Studies. On the sidelines of the Synod, I always meet with the Pope. Usually, it is an audience, which lasts for about an hour and allows of discussing issues on the agenda of our bilateral relations.

E. Gracheva: What does Pope Francis think about the rupture of our relations with Constantinople? Was this issue discussed during your meeting with him?

Metropolitan Hilarion: Of course, a considerable part of the time was given to a discussion on the situation in Ukraine, namely, to the church situation, and I set forth for the Pope the point of view of the Russian Orthodox Church on the developments. We do not assume that the Pope of Rome can be an arbiter in this dispute – it is absolutely impossible. It would be wrong to involve him in these problems and expect that he would take some actions or identify with a particular side. The Orthodox Church lives according to her own laws and rules. We will solve this problem on our own, without the participation of the Pope of Rome.
The breakoff of the Russian Orthodox Church’s relations with Constantinople has also to do with the relationships with the Roman Catholic Church since, along with the bilateral relations between the Russian Church and the Roman Church, there are also a pan-Orthodox – Catholic theological dialogue. And we have withdrawn from this dialogue as well.

Metropolitan Hilarion: Yes, it is a pan-Orthodox dialogue. Participating in it are almost all the Orthodox Churches except for a few. We have withdrawn from this dialogue just as from all the dialogues and organizations chaired or co-chaired by the Patriarch of Constantinople.

E. Gracheva: And, still, I want to understand the position of Pope Francis of Rome concerning the decision of Constantinople to grant autocephaly to Ukraine.

Metropolitan Hilarion: I cannot ventilate for you the content of the talks that were confidential. But on the whole, the position of the Vatican concerning the past and present developments in Ukraine has been sufficiently and on many occasions publicly expressed either by the Pope himself or by his authorized representatives. We have never heard any words of support for Constantinople’s brigand actions coming from the Pope or his representatives. We have never heard of any support for the actions of the Ukrainian authorities aimed at discrimination against the Russian-speaking population. Overall, we can see a well-balanced position voiced by Pope Francis personally and the Vatican as a state and by the Roman Catholic Church on various levels.

E. Gracheva: Your Eminence, you have mentioned the meeting of Patriarchate Kirill and Pope Francis of Rome in Havana. Everybody is interested in the question: Shall we expect the head of the Catholic Church to come to Russia in the nearest future? There is a lot of talking about it in the mass media. If it does happen, then what does the historic meaning of this event lie in? How do you assess its importance? And did you talk about it during the audience?

Metropolitan Hilarion: During the audience, I did not talk about it because this matter is not on the agenda of our bilateral relations. This matter is of interest mostly to journalists; the faithful are not interested in it now. In the Orthodox milieu, in the Russian Orthodox Church, there is among at least some people including active believers, a negative attitude to the Roman Catholic Church as a whole. If such a visit were to take place, it would be accompanied with some provocations, discontent, and it is something we do not need at all.
Not very long ago, the Catholic Church in Russia too has stated that the Pope’s visit to the country today would be premature. That is, to speak that there are some masses of Catholics in Russia who are waiting for a visit of the Pope of Rome would be, to put it mildly, a great exaggeration – all this is an idle talk of journalists.

Metropolitan Hilarion: It is a part of the bargain, but Constantinople has its eyes on more immovable property. The St. Andrew church is a large, beautiful, historic church. If you drive towards the Kiev Laura of the Caves up from the Dnepr, you will necessarily pass by this church. At present, this church is a museum and a property of the Ukrainian state. As far as it can be judged from the adopted decisions, it will remain a property of the Ukrainian state and will continue functioning as a museum, but there will also be celebration of divine services by representatives of the Patriarchate of Constantinople. I think, it is not quite what Constantinople wanted and, as far as I know, President Poroshenko is going to it again evidently to continue bargaining.
Patriarch Bartholomew is in a great hurry, and the reason for the haste is that the customers of this whole project demand that he take resolute and prompt actions. They are not only in Ukraine; the principal customer is the United States of America. In the US embassies, there are even staffers who are specially assigned to deal with this issue and make an influence on Patriarch Bartholomew. We are well aware of it. We understand that Patriarch Bartholomew is not free now in his actions.
He positions himself as the head of the Orthodox Church, as a sort of Pope of Rome for the Orthodox Churches. The Pope of Rome however is not engaged in predation; he is not engaged in robbery. Setting off for a country (for instance, he has recently been to the Baltics visiting Lithuania, Latvia and Estonia) the Pope comes to support the faithful, to pray with them. He does not come to take something away from one and hand it over to another. That would be unthinkable. But Patriarch Bartholomew is engaged today in exactly this kind of predation.
At the same time, the Patriarch of Constantinople is doing it contrary to the clearly expressed will of most Local Orthodox Churches, many of which have warned him, also in public, against actions of this kind. He is now stating that Orthodox Churches are not authority to him, that he makes decisions singly and all the autocephalies in the past, except for the autocephaly of old Churches, were granted by Constantinople singly and therefore he now has a right to grant autocephaly. This is what we have encountered today.

E. Gracheva: What other objects of church economy in Ukraine can be of interest to the Patriarch of Constantinople?

Metropolitan Hilarion: Quite a list. There is a building in Lavrsky Street in Kiev; there is one more church. That is why there are conversations going on, to be more precise, a bargaining.

In the second part of the talk show, Metropolitan Hilarion answered questions from TV viewers, which came to the site of The Church and the World program.

Q: How to come to the partaking of the Holy Gifts if during the Divine Liturgy the Patriarchate of Constantinople is mentioned as Primate of the Local Church while there are no churches of the Russian Orthodox Church in the territory of Poland?

Q: Can Russian people request for a commemoration from Athonite monks?

Metropolitan Hilarion: A request to Athonite monks for a commemoration is quite possible, of course.

Q: How to deal with those who are going to Mount Athos to become novices or church restoration workers?

Q: Can one attend divine services without taking part in the sacraments in the St. Andrew Nevsky’s in Paris on rue Daru, which belongs to the Moscow Patriarchate?

Metropolitan Hilarion: The church of St. Alexander Nevsky on rue Daru in Paris was built by Russian people with the Tsar’s money, but it was unlawfully captured by Constantinople. It happened as far back as the 1930s and divine services are celebrated now in this church by the clergy of the Patriarchate of Constantinople. One can attend services and pray in it but the faithful of the Russian Orthodox Church cannot take communion in it at present.