Metropolitan Hilarion Meets with Primate of the Orthodox Church of Jerusalem 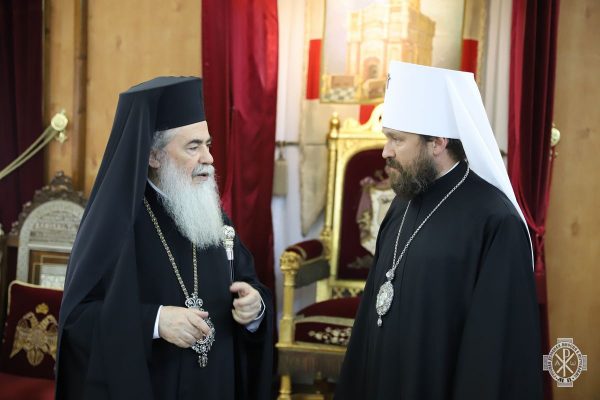 On June 6, 2019, with a blessing of His Holiness Kirill, Patriarch of Moscow and All Russia, Metropolitan Hilarion of Volokolamsk, head of the Moscow Patriarchate department for external church relations (DECR), arrived in the Holy Land.

At the airport the high guest was met by Archimandrite Alexander (Yelisov), head of the Russian Ecclesiastical Mission in Jerusalem, and Hieromonk Dometian (Markarian), deputy head of the Mission.

The archpastor celebrated the Divine Liturgy at the Cathedral of All the Russian Saints in the Gorneye Convent in Ein-Karem. He was assisted by Archimandrite Alexander (Yelisov), as well as the clergy of the mission and the convent.

Addressing the nuns after the service, Metropolitan Hilarion conveyed to them a blessing from His Holiness Patriarch Kirill, who, as the archpastor noted, “Always mentally abides with the Holy Land and this holy convent”. His Eminence also congratulated everybody on the Third Finding of the Head of St. John the Baptist, celebrated that day, and spoke about the mission of the saint who was instructed by God to prepare the way for the promised Saviour of the world: “St. John prepared that way by his life, his preaching and his sacrificial ministry, which ended in his martyrdom. And as Lord the Saviour said, ‘Among them that are born of women there hath not risen a greater than John the Baptist” (Mt. 11:11).

Later that day, Metropolitan Hilarion met with His Beatitude Theophilos, Patriarch of the Holy City of Jerusalem and All Palestine. His Eminence conveyed to His Beatitude greetings and best wishes from His Holiness Patriarch Kirill of Moscow and All Russia, after which they exchanged opinions on issues of mutual concern with regard to inter-church relations.

Metropolitan Hilarion also visited the Church of the Resurrection of Christ in Jerusalem and venerated its shrines – the Life-Giving Lord’s Sepulcher, Golgotha and Stone of Anointing.

On the same day, His Eminence visited the St. George Church in Lydda and the Church of the Righteous Tabitha in Jaffa (Joppa).