My blindness never ceases to amaze me.

They brought a man to Jesus who was born blind. You don’t have to read many of the Fathers until you realize that this blindness can represent many different things. If nothing else, it suggests that all of us are born blind. Here is the simplest diagnosis of the human condition. This is an important fact to consider, because if we find it hard to believe that we are indeed blind, the greater is our darkness.

We are born as infants and, though we have great intellectual potential, there is much that we don’t know. If you don’t believe that babies are smart, try to learn a new language. To overcome our infantile condition, we spend a lot of time and money in educating our minds. I don’t mean for this to be just a rhetorical question, but does education overcome our blindness? When we criticize past cultures, we are like the Pharisee who, when looking at the publican, remarked to God that he was glad that he wasn’t like him. We are so glad to be modern folks and we believe that the size of our libraries proves our superiority. To be honest, there are great men and women of philosophy, math, and science who have advanced our knowledge of many things. God bless them. Yet, despite their intelligence, examples abound of how many of these intelligent people wreaked havoc upon the world. Education alone has not overcome our blindness. The proof lies in the very fact that, while we recently witnessed some of the greatest advances in science, we also experienced some of the bloodiest times in human history. Those who would point to the history of the intolerance of religion as the major cause of human conflict lose the argument in the twentieth century. The twenty-first century is not proving to be any better.

Believing that we see, we do not understand that we are not taubla rasa  – a clean slate upon which truth is written. In fact, we are slaves to the petty truths of our culture and these truths have blinded us and affects all of our endeavours. All of them! Yet we believe that our education is culture-neutral and that, being free from bias – especially the bias of religion – it has opened our eyes and freed us from personal prejudices. We believe that science is pure and cannot be subject to the misrepresentations of cultural bondage. We think our media are unbiased. It is even worse for religion, because here every man and woman is his or her own pope. Believing that we see the Light, we are blind to the fact of how the truth of religion has been distorted by cultural bondage and blindness. 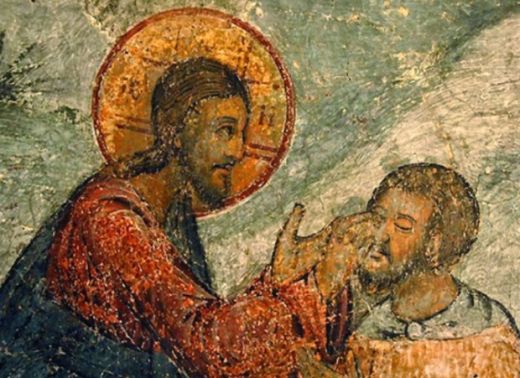 How often has the human race followed someone believing that their “touch” would bring sight? Consider that we are now coming into the season of full-blown political activity. Slogans and commercials will wash over us like a tidal wave. The American people are fairly well-educated, yet it amazes me how quickly we swallow party propaganda. Despite our education, it seems that appearance and not substance is what moves us to elect someone. I remember asking my mother why she wanted to vote for John F. Kennedy rather than for Richard Nixon. Even though I was young, her answer amazed me: “Because he’s so handsome!”

The literary prophets of the human race have warned us, thereby joining the biblical Prophets, that we are blind and being led by the blind. They warn us that falsehood masquerades as truth, but we cannot see it because we will not believe it. And so they tell us that the day may come when a leader will rise up who will know how to win our absolute allegiance and then lead us into absolute disaster. How many times in human history has this already happened and yet we go on in our blindness hoping that the next leader will not fail us! Will the day ever come when our blindness will be so great and our belief in our vision so strong that an Anti-Christ will really appear who will promise to lead us into “all truth?”

The beginning of sight is to know our blindness. Then we will not be so ready to play follow-the-leader. Some  wisdom from the Early Church could help us here. Speaking about Christians in his Epistle to Diognetus, Mathetes says: “They dwell in their own countries, but simply as sojourners. As citizens, they share in all things with others, and yet endure all things as if foreigners. Every foreign land is to them as their native country, and every land of their birth as a land of strangers.” Some may think this is just pie-in-the-sky religion, but here is vision and wisdom and sight: a healthy skepticism that makes us foreigners even in our own intellectual and cultural landscape, so that we would question all its forms and expressions.

I don’t want to confuse you. Is being a skeptic compatible with being Orthodox? It is, rightly understood. As I said, realizing my blindness is the beginning of gaining sight – but it is just the beginning. Our goal is to become not just a skeptic, but neptic: that is, awake and with our eyes wide open. Can this be done and, if so, how can it be realized? It’s a grace, really. It is done by the grace of a touch: the touch of the real Man, the only One who truly had His eyes open. Though He loved the world, He knew that He was passing through. He would not be bound to the culture of his time but transcended it. He advised His people to follow Him, and to be in the world, but to not be of the world.

The man born blind gained his sight by the Man’s touch and then was asked by the blind to explain. What can a person say who has regained his sight? What proof can he give? All he is could say is “once I was blind and now I see.” The blind laughed in scorn and would not believe it. Here is the irony of the dialogue between Pilate and Jesus. Jesus said that those were seeking truth would hear his voice. Pilate’s immediate answer was “what is truth?” Pilate thought he had been clever and won the debate. Sadly, the blind was deaf as well. This has always been the experience of the neptic ones – the saints. The blind, believing that they see, try to put out the sight of those who can see. Thankfully, at least at this point in time, darkness has not overcome the Light.

Let me say this again: a true human being is one who is awake. Whatever his station in life, whatever his educational or financial accomplishments, he knows that he is only passing through. Therefore, he will walk lightly on the earth and will not wreak havoc on it. He will not fall for the belief that his vision is clear while he destroys the other blind folk that live in it. But this takes humility to grasp, and most of us are not in a hurry to embrace humility. After all, I didn’t go to college for twelve years to be humble. Even Socrates puts me to shame, for at the end of his life he confessed that compared to the gods he knew absolutely nothing. In the light of his intelligence, he saw his blindness. Knowing this truth made him the wisest of men.