Kiev: Appeal to the Faithful Flock of the Ukrainian Orthodox Church

Source: ROCOR
Pravmir.com team | 18 December 2018
On December 17, 2018, an extraordinary session of the Synod of the Ukrainian Orthodox Church was held at Kiev-Pechersk Lavra. The Synod adopted an appeal to the archpastors, pastors, monastics and faithful. 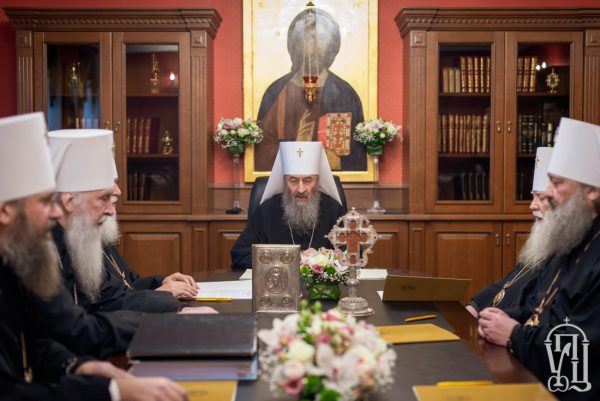 Your Eminences, Your Graces, Beloved in the Lord Fathers, Brothers and Sisters:

We report with sorrow that for straying into schism, the Holy Synod was forced to relieve His Eminence Metropolitan Simeon of Vinnitsa and Barsk of administering his diocese and suspend him from performing divine services, and also suspend from service His Eminence Metropolitan Alexander of Pereyaslav-Khmelnitsky and Vishnevsk. We call upon you all, dear bishops, fathers, brothers and sisters, to pray for the enlightenment of and the return to the bosom of the Church the aforementioned hierarchs and others who have gone into schism. Our Church, like a loving Mother, awaits their return with hope.

Dear bishops, fathers, brothers and sisters: We turn to you with love and appeal to you to continue to preserve the purity of the Holy Orthodox Faith, to keep spiritual unity with our Holy Ukrainian Church, which is the canonical successor to the ancient Kievan Metropoliate, which came into being by the prayers of Apostle Andrew the First-Called and through the labors of Holy Prince Vladimir, Equal-to-the-Apostles, and within which our glorious ancestors lived in service to God.

We express our gratitude to the hierarchs, clergy, monastics and all laypersons who during these difficult times endure coercion and confirm their dedication to the Holy Ukrainian Orthodox Church. Holy Scripture teaches us: “Be thou faithful unto death, and I will give thee a crown of life” (Revelation 2:10).

We call upon all the faithful flock of our Church to pray for those who, without understanding this, despise us and our Church. May the Lord forgive them. Meanwhile, you love your Church, love our Ukrainian Homeland and do all you can to ensure that there is peace, patience, concord and true Christian love in our land and among our people.

On behalf of the Synod of the Ukrainian Orthodox Church,

+Onuphry,
Metropolitan of Kiev and All Ukraine,
Primate of the Ukrainian Orthodox Church.

Most viewed articles
Blasphemous and Obsessive Thoughts Come Into My Mind. What Do I Do?148
An Extraordinary Session of the ROCOR Synod of Bishops Convenes108
Funeral Services for His Eminence Metropolitan Hilarion of Eastern America and New York78
Is God a Fool?69
Metropolitan Joseph, Bishop Thomas Celebrate Centennial of Little Falls Parish55
How to Respond to Opposition to the Gospel45
PRAY: 14 Students, One Teacher Dead After Texas Elementary School Shooting40
A Piece of Rock Falls Down on the Skete of St. Anna on Mt. Athos26
His Beatitude Metropolitan Tikhon Issues Statement on Tragic School Shooting in Texas25
Most popular authors
Pravmir.com team212
Fr. Eugene Murzin148
Archpriest Stephen Freeman69
Subdn. Peter Samore55
Archpriest Basil Ross Aden45
Associated Press40
Metropolitan Tikhon of All America and Canada25