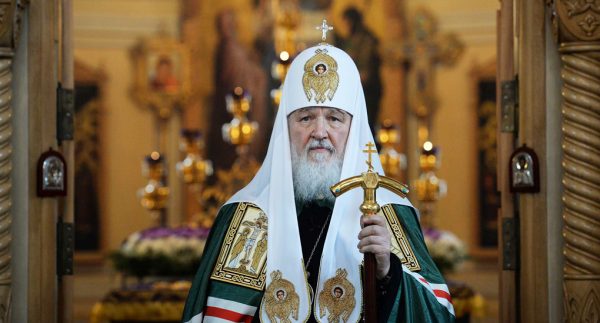 His Holiness Patriarch Kirill of Moscow and All Russia sent messages to the Primates of the Local Orthodox Churches; Pope Francis; Archbishop of Canterbury Justin Welby, head of the Anglican Communion; Rev. Dr. Olav Fykse Tveit, General Secretary of the World Council of Churches; Mr. António Guterres, United Nations Secretary-General; Mr. Thomas Greminger, Secretary General of the Organization for Security and Co-operation in Europe; as well as to H.E. Mr. Emmanuel Macron, President of France; and H.E. Mrs. Angela Merkel, Chancellor of Germany as heads of the Normandy Four states. His Holiness Patriarch Kirill draw their attention to the large-scale violations of the rights and freedom of hierarchs, clergy and laity of the Ukrainian Orthodox Church.

“Recently, the interference of the leaders of the secular Ukrainian state in church affairs has grown into a blatant pressure on the episcopate and clerics of the Ukrainian Orthodox Church, what allows us to speak of the beginning of the large-scale persecutions,” the letter reads, “The pressure increased because of the refusal of the Ukrainian Orthodox episcopate to participate in the so-called “unification council” backed up by the leadership of Ukraine. During this “council” the Ukrainian Orthodox Church, the largest in the country religious confession uniting thirteen thousand parishes, over two hundred monasteries and millions of faithful, is supposed to be replaced by some new religious organization that is being created by the President of Ukraine Petro Poroshenko in concert with Patriarch Bartholomew of Constantinople.”

As is stated in the messages sent to the religious leaders, senior statesmen and heads of international organizations, “in order to force the episcopate of the Ukrainian Orthodox Church to participate in this event, the governmental authorities and law-enforcement agencies of Ukraine are taking actions flagrantly violating the constitutional rights and freedoms of the Ukrainian citizens.”

His Holiness mentions that hierarchs of the Ukrainian Orthodox Church are being summoned for “talks” and questioning by the Security Service of Ukraine; they are encountering obstacles when crossing the state border of Ukraine, are being detained under different pretexts and subjected to humiliating searches. For instance, on December 9, the Security Service of Ukraine denied Metropolitan Ilarion of Donetsk, a citizen of Ukraine, entry into the country, invoking “special instructions from Kiev.”

At the level of the Government and local authorities attempts are being made to deprive the Ukrainian Orthodox Church of its legal rights to use the Kiev Caves and Pochaev Lavras – major holy sites of the Orthodox Ukraine. “Thus, on November 23, 2018, the Ministry of Justice of Ukraine revoked the decision on the state registration of the right of the monastic community to use the complex of buildings of the Holy Dormition Pochaev Lavra. And on November 28, the Cabinet of Ministers of Ukraine revoked its instruction of July 17, 2003, On the Exclusion of the Holy Dormition Pochaev Lavra from the Kremenets-Pochaev State Historical-Architectural Reserve. The reserve representatives do not conceal that in future the monastery can be given for use to another religious organization. On December 5, the Kremenets-Pochaev Reserve conducted an inspection of items of church value in the Holy Dormition Pochaev Lavra,” the letter says.

His Holiness mentions that on November 28, for the first time in thirty years, a commission of the Ministry of Culture of Ukraine conducted an inspection of cultural property in the territory of the Holy Dormition Kiev Caves Lavra. On November 30, a search was conducted in the territory of a subsidiary farm of the Kiev Caves Lavra in the village of Voronkov of the Borispol district, Kiev region. During the search, a number of irregularities in judicial proceedings occurred.

As it is emphasized in the messages, attempts are being made to hold bishops and clerics criminally liable on baseless charges of “high treason” and “incitement to religious hatred.” In a number of regions in Ukraine massive searches are being carried out on the premises of diocesan administrations, churches and places of clergymen’s residence.

“The state-run mass media continue their massive campaign aimed at discrediting the Ukrainian Church by publishing confidential personal data of hierarchs and clergymen of the Ukrainian Orthodox Church that are at the disposal of the government. In particular, personal data of a considerable number of bishops of the Ukrainian Orthodox Church have been published on the Myrotvorets website, along with the comments stirring up religious hatred,” His Holiness Patriarch Kirill of Moscow and All Russia says in his letters, pointing out that this website functioning with the direct support of the Ministry of Interior of Ukraine “became notoriously famous for publishing personal data of the Ukrainian, American and European journalists who were after that subjected to beatings and threats; some of them were even killed.” His Holiness emphasizes that “despite protests of the American and European public, the governmental authorities of Ukraine did not close the Myrotvorets project, and the Ukrainian Ministry of Interior continues to support it.”

“The Ukrainian President himself does not make secret his hostile attitude towards the Church. Mr. Petro Poroshenko publicly threatened to banish from the country those Ukrainians who do not want to join the “autocephalous church” which is being created by the government,” the letters say, “It speaks for itself that the hierarchs of the Ukrainian Orthodox Church received invitations to the “unification council” signed by Patriarch Bartholomew of Constantinople from government officials, while the Constitution of Ukraine stipulates that “the church and religious organizations in Ukraine are separated from the state” (Constitution of Ukraine, Article 35), and therefore any interference of the state in inter-church relations is unconstitutional.”

“We do not know what steps the authorities of Ukraine will take next, what actions they can dare to undertake to achieve their goal in a time left before the presidential elections. Yet, the numerous facts of discrimination to which the Ukrainian Church has already been subjected make us fear even more serious infringement on the rights and freedoms of the Orthodox Christians, their greater sufferings for remaining faithful to the canonical Orthodoxy,” His Holiness Patriarch Kirill writes in his letters.

As His Holiness notes, at its session held on December 7, the Synod of the Ukrainian Orthodox Church was forced to admit the fact of “baseless criminal prosecutions” brought by the governmental authorities and “the pressure put on the episcopate, clergy and laity of the Ukrainian Orthodox Church with the view of making them take part in the so-called unification council.” The Synod rightfully concluded that such actions “violate the constitutional rights of the citizens of Ukraine to freedom of religion.”

“In our plain view the governmental authorities of Ukraine are blatantly interfering in church life, the fundamental human rights are being violated, and an obvious attempt is being made to use the Church for political benefits and in the election campaign,” the letters read.

The Primate of the Russian Church called upon the religious leaders, senior statesmen and heads of international organizations to make every effort to protect the episcopate, clergy and laity of the Ukrainian Orthodox Church from discrimination and pressure exerted by the Ukrainian authorities and to defend the freedom of conscience and religion secured by the international law.