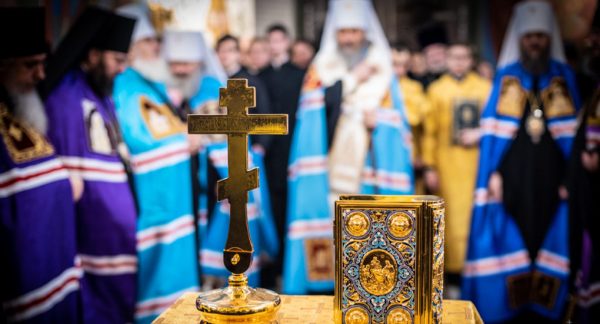 More than half the priests of the Diocese of Vinnitsa of the Ukrainian Orthodox Church who followed their hierarch Simeon Shostasky, the former Metropolitan of Vinnitsa and Bar, into schism in the new Ukrainian nationalist church following Saturday’s “unification council” have already repented of their poor decision and returned to the canonical Ukrainian Church headed by His Beatitude Metropolitan Onuphry of Kiev and All Ukraine.

As a representative from the Union of Orthodox Brotherhoods of Ukraine explains, after Simeon announced his transition to the new church created by the Patriarchate of Constantinople, 75 of the diocese’s 250 priests initially decided to follow him into schism, reports the online journal Foma, with reference to Interfax-Religion

As OrthoChristian previously reported, in Vinnitsa itself, neither the authoritative deans and priests supported him, nor the ancient Holy Trinity Brailovsky Convent and other monasteries. Half of the people in the Transfiguration Cathedral left in protest after Sunday’s service as Simeon announced his defection.

“However, there was a meeting of the clergy of the diocese on Tuesday at the Elevation of the Life-giving Cross Cathedral in Vinnitsa with the newly-appointed hierarch—Archbishop Barsanuphius, after which 45 of the ‘departing’ clerics said that they would remain in the canonical Church,” the Brotherhoods representative said.

As the source explained, the meeting was held at the Holy Cross Cathedral because the Holy Transfiguration Cathedral in Vinnitsa is still in the hands of former Metropolitan Simeon and his supporters. Several young men seized the keys to the church from the security guard on Saturday morning in preparation for Simeon’s participation in the “unification council” and his departure from the Church of Christ.

Along with the athletic young men holding the keys, employees of the Security Service of Ukraine filled the church on Sunday as Simeon made his announcement. The diocesan website is still under Simeon’s control as well and has continued reporting on his activities despite the fact that he was suspended and replaced as the head of the diocese by the Ukrainian Orthodox Church on Monday.

However, the faithful are seeking the return of the church to them, the representative explained, though Simeon has already stated that the Ukrainian Cabinet of Ministers will soon make a decision on the re-registration of parishes of the canonical Church to the new schismatic structure.