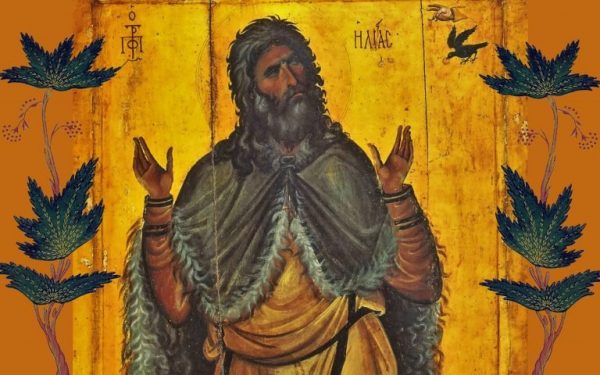 The Bible has in its pages only four evangelists. It has only five authors of the holy epistles.

Yet the Bible – in the Old Testament – has many, many more prophets, which God sends time and time again, over many centuries, to send the same message.

God sent His prophets again and again – many of them – for one simple reason: most people do not listen to their message, and the few that do need reminding.

Great among these prophets is the holy man Elijah.

At his prayer, God dried up the rains for three and a half years.

At his prayer, God sent down fire from heaven to burn up an animal sacrifice, plus the drenched wood and water around it.

At his prayer, God sustained the food supply of a widow, and then raised her dead son to life.

Then, at the end of his life, he was carried off in a fiery chariot: he didn’t ever die.

And yet, for all this – for all the power God manifested in him – every single other prophet of God at that time turned away to the worship of the pagan god Baal.

Imagine it: that’s like every Orthodox priest in this country denying Christ, after having seen scores of miracles!

That is a pitiful example of lukewarm faith!

But that is exactly the situation that existed at the time of the Prophet Elijah.

The Prophet Elijah was the only man left standing for the true God on Mount Carmel.

Four hundred and fifty prophets of Baal stood against him.

Let’s put that in context:

The worship of Baal practised the killing of newborn babies.

The worship of Baal practised violence – in word and in deed – against those who worshipped the True God.

To be a righteous and holy man of prayer in such a situation is truly exceptional.

But it always is.

We too live in a time where our governments finance the killing of children in the womb. Some religious leaders even support this. Some so-called Orthodox people do as well.

We too live in a time where our governments and big businesses finance entertainment and parades with sexual acts in public. Our school system even calls this part of the curriculum.

Some religious leaders even support this. Some so-called Orthodox people do as well.

Saint Paisios said that to be righteous simply means to be trying – to be making an effort – to live in a holy manner. In most periods of history, our times included, this is the exception, rather than the rule.

So we shouldn’t be surprised to find people like the prophets of Baal in the world.

What should surprise us is whenever we find a righteous person – a saint – like the Prophet Elijah.

Speaking about him, Saint James says, the prayer of a righteous man availeth much (James 5:16). Think about it. Think about all the things accomplished by the prayers of the Prophet Elijah.

He was alone. He was surrounded. The times in which he lived were hopeless.

He said, I alone am left, the only prophet of the Lord; and the prophets of Baal are exceedingly many.

Do you know how that feels? Do we not live at a time when we feel completely outnumbered?

Do you not feel like even opening your mouth will have the hounds of hell storm down your throat?

Why did the prayers of the Prophet Elijah bring him such help?

Why did they have such power – enough power to overwhelm all that opposition, and the power of famine, sickness, death, and the devil?

Saint Augustine says, it’s because the Prophet Elijah began with confessing his sins before God.

He cleaned up his own life, so he could come before God in prayer.

You see, it’s impossible to have powerful prayer when your heart is divided with thoughts and with sins. That, brothers and sisters, is the reason we have been given Holy Confession in the Church.

Saint James writes, Confess yours sins to one another, and pray for one another, that ye may be healed. (James 5:16)

We use the words before these in the service of Holy Anointing, Holy Unction: Is any sick among you? let him call for the elders of the church; and let them pray over him, anointing him with oil in the name of the Lord: And the prayer of faith shall save the sick, and the Lord shall raise him up; and if he have committed sins, they shall be forgiven him. (James 5:14-15)

We must confess our sins, and make use of the prayers of the Church and Her Holy Mysteries, so we are ready to stand before God and pray.

Not to play around with prayer. Not to treat our prayers like a hobby… or a chore!

The effectual fervent prayer of a righteous man availeth much, Saint James says.

Does yours? Does your effectual, fervent prayer avail much?

Brethren, a holy life – the life of a saint – does not start with us standing in the midst of the darkness and raising the dead, as the Prophet Elijah did. It starts with us confessing our sins, and purifying our lives, just a little bit at a time!

We can pray for the demonically-inspired rioters in the streets – because Christ died for them, and He loves them, and He wills that all of them should be saved and come to the knowledge of the truth.

Brothers and sisters: the Lord sent many, many prophets before the coming of Christ, so that we would hear His Word, and turn to Him with our whole hearts.

Most of us don’t do this.

But it is possible for each one of us to join that righteous company of those who do.

Those who stand amidst the darkness, those who repent ourselves and prayer with fervency and love for others.

And by doing this, perhaps we can save a soul from death.