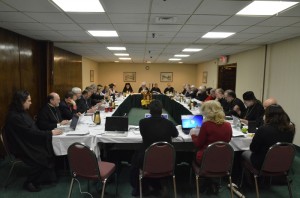 The Lesser Synod of Bishops and the Metropolitan Council of the Orthodox Church in America met at the Chancery here February 25-28, 2013.

Highlights of the meeting, according to Archpriest Eric G. Tosi, OCA Secretary, included the following.

Council members made a significant recommendation concerning the 18th All-American Council, slated to convene in 2014. Father Tosi reported on projected dates and venues for the Council, adding that preliminary work with regard to establishing a Preconciliar Committee had been undertaken. In response, the members of the Metropolitan Council decided to recommend to the Holy Synod of Bishops that the 18th All-American Council be delayed by one year—until 2015. Their rationale was based on a number of criteria. Among them is the desire to avoid additional financial burdens that might be placed on parishes, especially in light of the unexpected expenses incurred in convening the extraordinary 17th Council in 2012. It also was noted that, due to the time spent planning the 17th Council, there would be less time available for planning and convening a Council in 2014. Consequently, it was the feeling of Metropolitan Council members that sufficient time must be spent in producing a “solid finished product” that has been fully explored and agreed upon for the Church, particularly in the area of finances and Statute revision. Further, it was felt that, since the next Council will be held during the summer to ensure youth participation and activities, as well as to coordinate efforts with the Fellowship of Orthodox Christians in America [FOCA]—the FOCA’s annual convention will be held concurrently, in partnership with the All-American Council—additional planning time is essential. Metropolitan Tikhon further expressed his desire to witness “a period of peace and calm as we move forward with the work of the Church.” Among the sites being considered are Detroit, Baltimore, and Cleveland.

The next Metropolitan Council meeting will be held September 23-26, 2013.

Minutes and reports will be posted on the OCA web site as they become available.