Let Us Never Forget This Oneness of the Church of God: On the First Celebration of All Saints of the British Isles

Source: Metropolitan Anthony of Sourozh Archive
And now we suddenly became aware that we had come into the West, not in a part of the world that was strange and alien to us but in a part of the world which for nearly a thousand years had shared with us the same faith, the same plenitude of oneness, the same jy of belonging together with all the Christian world.
Metropolitan Anthony of Sourozh | 29 June 2014 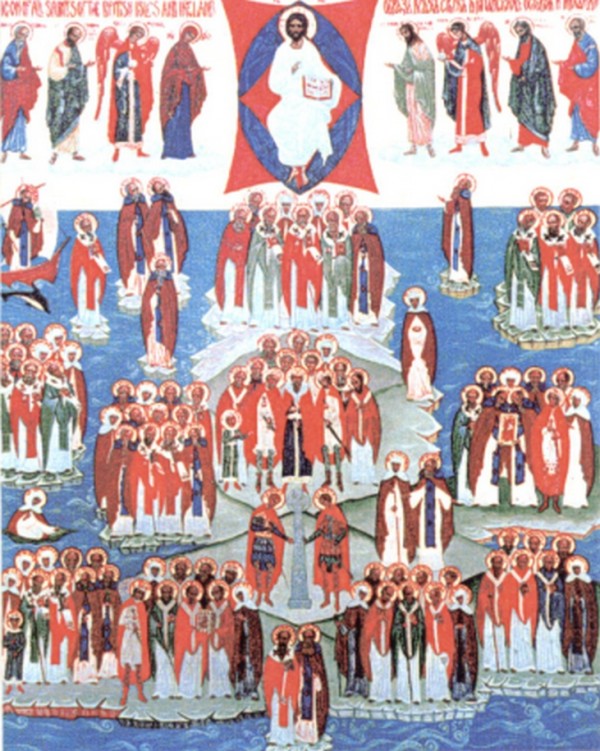 From the first day of its existence the Church has reverenced, and loved and sung the praises of its saints, of those people who have been heralds of the love of God, and who have testified to their faithfulness, to the steadiness, of their love not only by words, but by their whole life, and by their whole death. The first martyr, Stephen, and after him so many martyrs and witnesses, and all those who have lived and shone, and been on earth the resplendence of God, the shining of His love, the tenderness of His compassion, the purity of His message have been remembered with deep gratitude. Some of these saints are known, many names have fallen into oblivion, but all are remembered and all are in our midst, and it is their faith, their faithfulness, their message that has made it possible for us to belong to the Body of Christ, to enter onto that path which they have followed so gloriously. Some of these Saints are known throughout the world, some are venerated locally, either in one country or another, or simply in a limited district where they have shone; and where their memory is kept with veneration. 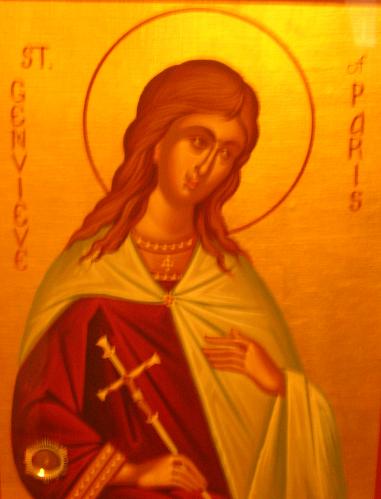 One of the first Saints of the West that called for the reverence of the Russian Orthodox emigrees in Western Europe was Ste Genevieve of Paris, and when I say that she called us to pay her veneration, to remember her together with the many Orthodox Saints of the West, I am using the words advisely. In one of our poorest and smallest communities in Paris a woman saw a dream that she was somewhere in the thickets near a wood, that she was impelled to look at what there was within it; she found a gate, walked further and was confronted with the statue of a woman, who was holding in her hands a book and a sheaf of wheat, and this woman looked at her in sorrow and said: How is it that the people of my city, who share my faith pay me no honour. The woman awoke, there was no name she could attach to the vision; she spoke of it, but she had no answer, until a few weeks later, going to a small place not far from Paris, called Sainte Genevieve des Bois, she recognised the place of her dream, the thicket; she entered it, found a gate and was confronted with the same statue, but this time an inscription revealed to her it was Sainte Genevieve, the patron saint of Paris together with Saint Denis. And she brought the news, and in our small community we began to pray to her, later we created a parish in her name, and this was the beginning of French Orthodoxy.

This opened our minds, and our hearts to something which we had overlooked, because having lost our Country and all we loved we had a tendency to be (engrained) in our Russian life, remembering only our Russian ancestry, both spiritual and material, the country we loved, the people who were our kin, and the saints who were the glory of Russia. And now we suddenly became aware that we had come into the West, not in a part of the world that was strange and alien to us but in a part of the world which for nearly a thousand years had shared with us the same faith, the same plenitude of oneness, the same jy of belonging together with all the Christian world. We began then to pay attention to the saints of the West and in all countries now this awareness has grown and when we come to a country of the Western world, we know that beyond a thousand years of separation we meet the memory, the prayers, the names and the presence of those Saints of Orthodoxy who are and were its glory, its resplendence before God, we come to our own people; and this is something which is so wonderful and for which we are so deeply grateful. We are no strangers in this land, thousands and thousands of men and women have shared our faith; we are strangers in no land because the oneness of the Church hundreds of years ago unbroken make us the kin of those who are their resplendence and their glory.

Later we wrote about it to one of the greatest men of the Russian Church, to Patriarch Sergius at the time when he was still ‘Locum tenens’ of the Seat of Moscow and of all Russia; he encouraged. us, he called us to recreate, to call back into life the Orthodoxy of the West; he called us to translate the services, to celebrate in the language of the country, to make Orthodoxy alive and available to those who had lost it and yet longed for its plenitude. And this we have done in all the countries in which Russian Orthodoxy has been brought by the tragedy of the Russian Revolution and the subsequent years.

And now, for the first time we have celebrated here, after the Sunday of All Saints appointed of old to be kept after Pentecost, after the Sunday of All the Saints of Russia, that is celebrated as a consequence of a decision of the Council of I9I7-I9I8 at the moment when the revolution was breaking all that had been standing, we have kept now the Sunday of All the Saints of the British Isles. Today, unbeknown to the world, we have began a tradition which will not die, we have resurrected the memory of all those who are our brothers in the Faith, examples for us to follow in our lives, those people on whose prayers we can count, who are at one with us. Let us never forget this oneness of the Church of God, let us not forget the way in which the Saints of the West have addressed themselves to us, challenged our faithfulness in the person of Sainte Genevieve of Paris, let us never forget the loving wisdom of Patriarch Sergius, who called us to be like seed sown in the West which is bound to die, because our generations are growing thin, and those who were children are now among the old who came out of Russia. Let us remember faithfully, lovingly, and build on the foundation of the Saints, on the foundation of the faith once delivered to them, Christ being the cornerstone, a Church whose mark will be love, offering of self, readiness to die that others may live, full of joy, open, tender and true. Amen. 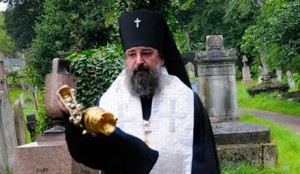 Reverend Yakov Smirnov, or James Smirnov as he is known in Britain, was a Russian Orthodox…