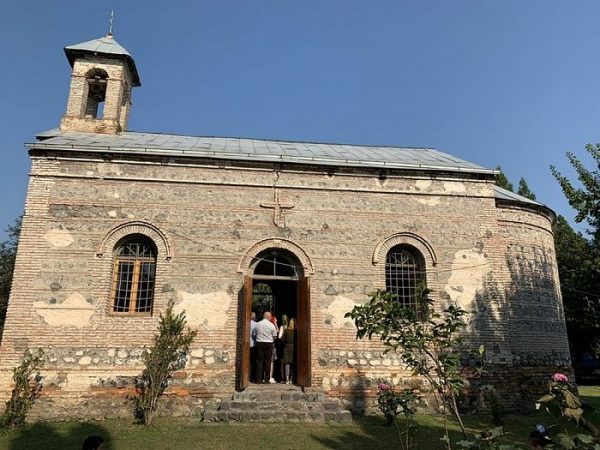 The Orthodox faithful of the village of Kotoklo in the Kakhi District in the historical Georgian section of Azerbaijan known as Saingilo had great cause to rejoice earlier this month, as the Divine Liturgy was celebrated in their local church for the first time in just under a century.

His Grace Bishop Dimitri (Kapanadze) of Khornabuji and Hereti of the Georgian Church consecrated the Holy Trinity Cathedral and celebrated the Divine Liturgy there, for the time first time since 1920. The opening of the cathedral brought great joy to the local Ingiloy Georgian Orthodox population, which has been calling for the restoration of the church for decades, reports karibche.ambebi.ge.

78-year-old Vera Berikashvili is recognized as having made a special contribution to the restoration of the church and the strengthening of the faith of the local villagers. There are about 200 Georgian families living in the Kakhi District. The service was attended by several clergy, monastics, faithful, and public officials. Services will be periodically celebrated in Holy Trinity Cathedral from now on by Fr. Peter (Khumarashvili) from St. George’s Cathedral.

Many more churches in Saingilo are awaiting restoration. Some are in very poor condition and practically falling to pieces, including the Seven Church Monastery complex and the cathedral in Zaqatala Central Park. The Georgian population in Azerbaijan faces many hardships, often not being allowed to build or reopen churches and having to hide their faith.