Source: OrthoCuban
Monks stop permanently. They leave the world, in a sense, to learn to look around them and to really see this world and the people and creatures that God has created.
Priest Ernesto Obregon | 06 June 2014 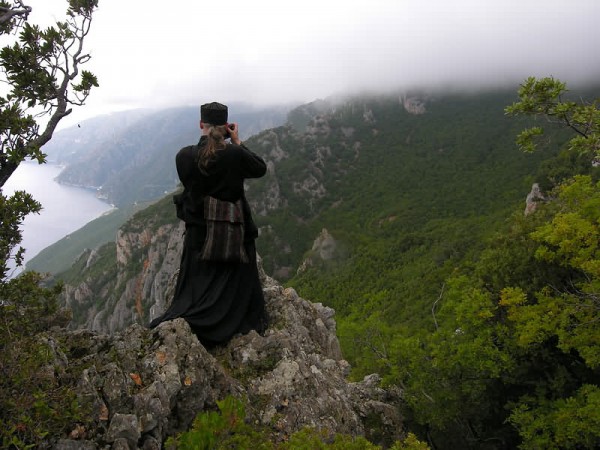 “If, then, I were asked for the most important advice I could give, that which I considered to be the most useful to the men of our century, I should simply say: in the name of God, stop a moment, cease your work, look around you.” ? Leo Tolstoy, Essays, Letters and Miscellanies

“This sacrifice for the sake of sharing means learning to give, and not simply to give up. It is learning to share and to connect with others and with the natural world. It is a way of loving, of moving gradually away from what I want to what God’s world needs. It is liberation from fear, greed and compulsion. It is regaining a sense of wonder, being filled with a sense of goodness, seeing all things in God, and God in all things.” – Patriarch Bartholomew of Constantinople

The heavens declare the glory of God; and the firmament shows His handiwork. Day unto day utters speech, and night unto night reveals knowledge. – Psalm 19

What is man that You are mindful of him, and the son of man that You visit him? For You have made him a little lower than the angels, and You have crowned him with glory and honor. – Psalm 8

God, who made us, knew our needs. And, thus, he set aside at least one day a week to stop and smell the roses. Yes, of course I know that we were to worship God on that day as well. But, notice that most of the regulations for the Sabbath concentrate not on worship, but on stopping work in order to have some free time. Eventually, the Early Church added a second day of rest. How did this come about? Well, the Early Church actually had a high view of the Jewish Sabbath, even though the switch to Sunday worship began during New Testament times. You can read in the Acts of the Apostles how Saint Luke mentions that worship on the first day of the week was considered a normal thing. And, they knew that the first day of the week was a day to be honored as much as the Sabbath. Our modern weekend comes from the honoring of the Sabbath and the honoring of the first day of the week. No, it did not happen right away. But, it did happen.

As a result, we were given something that did not exist in much of human existence. We were given the gift of leisure time. We were given time to both appreciate each other and to appreciate God’s creation. I think that Tolstoy captured it best when he said, “… in the name of God, stop a moment, cease your work, look around you.” Monks stop permanently. They leave the world, in a sense, to learn to look around them and to really see this world and the people and creatures that God has created. The rest of us cannot do that. We can only leave the world for a day or two a week. But, it is important that when we leave our workaday world for a day or two that we take time to appreciate all of God’s creation, including our fellow human beings. We find perspective when we stop to worship God, and to cease our work and to look around us in appreciation for God’s creation.

Thus, it troubles me that statistics show that Americans are the least likely to take vacation time of all the First World nations. Worse, our vacation time is actually going down, instead of up. What this means is that we consider that spending time in a modern mechanized technological society is more important than spending time with people and with the creation. Somehow, we have made work more important than relating to people and to the creation.

So, this weekend, think of Tolstoy, of Patriarch Bartholomew, of King David. And, then, take some time out. Stop a moment. Cease your work. Look around you. Your spiritual life will be all the better for it.

Most viewed articles
Maronite Patriarch Thanks Russian Patriarch for His Support for Christians in the Middle East112
Food for the Journey82
Athens and Jerusalem: the Role of Philosophy in Faith, with Analysis by St. Gregory Palamas82
The pandemic is a significant examination for us all, Transylvania Metropolitan says66
Fire Destroys Main Building with the Church of St. Peter Convent in Pavlodar62
Orthodox Priest Rescues Two People from Fire in Constanța53
We Are Not Saint Mary of Egypt (But We Can Still Repent)31
Most popular authors
Pravmir.com team174
Aurelian Iftimiu120
Dcn. Michael Schlaack82
Eric Hyde82
Archpriest Geoffrey Korz33