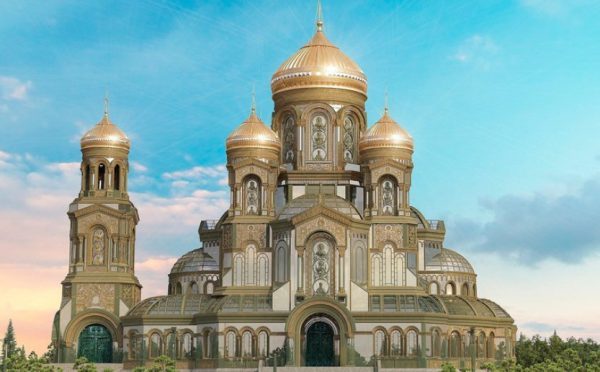 The Patriarchal Cathedral in honor of the Resurrection of Jesus Christ, the main church of the Russian Armed Forces, is to be consecrated on June 22, 2020, the Day of Remembrance and Sorrow in Russia [79 years ago, on June 22, the Nazi attacked the Soviet Union – Pravmir]. The great consecration will be performed by His Holiness Kirill, Patriarch of Moscow and All Russia.

“The long-awaited event for all of us will take place on June 22. On the Day of Remembrance and Sorrow, the main church of the Armed Forces and the museum complex “Road of Remembrance” will open,” said Russian Defense Minister S.K. Shoigu at a conference, reports the official website of the Russian Orthodox Church.

“We want people to bring their children and grandchildren here, where they could connect with our history, and walking through the “Road of Remembrance”, they could see what price was paid for our peaceful life today,” the minister noted.

The church was built on public donations. In total, over 3,081 million rubles were raised for its construction.

It was supposed to open by the 75th anniversary of the Victory in the Great Patriotic War, but due to the pandemic caused by the coronavirus infection, the opening ceremony was postponed.