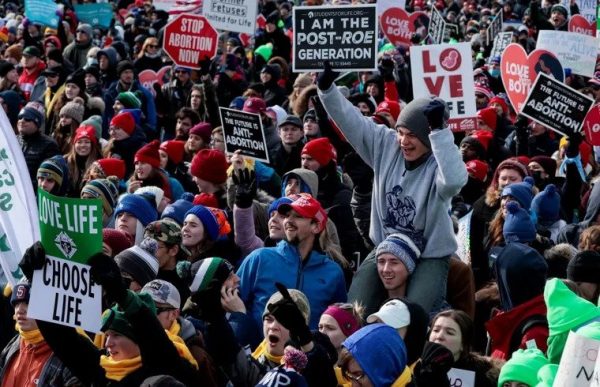 WASHINGTON — Participants at the 49th annual March for Life expressed optimism about the state of the pro-life movement as the U.S. Supreme Court is set to rule on a case that many believe could alter abortion legal precedent in the United States.

Despite single-digit wind chills, tens of thousands of protesters gathered on the National Mall Friday to declare their opposition to abortion at the first major pro-life rally to take place since the coronavirus pandemic broke out nearly two years ago.

Last year, the COVID-19 outbreak forced organizers to scale back the in-person event considerably as just a small group of pro-life leaders gathered in Washington, D.C., as many pro-life Americans tuned into virtual programming.

Following a rally and speeches from pro-life leaders and celebrities, participants marched roughly 1.5 miles to the U.S. Supreme Court. The march takes place every year in January around the anniversary of the 1973 Supreme Court decision Roe v. Wade, which found all state laws banning abortion unconstitutional, making the procedure a national right.

Last month, the Supreme Court heard oral arguments in the case of Dobbs v. Jackson Women’s Health Organization, where the state of Mississippi is asking justices to uphold a state law banning abortions after 15 weeks gestation.

A ruling in favor of Mississippi would chip away at the central holding of Roe and the court’s subsequent ruling in Planned Parenthood v. Casey that limited the ability of states to enact abortion restrictions.

Attendees of this year’s march from across the country spoke with The Christian Post about what they believe will happen in the next few months as a decision is expected by June.

Vincent Dicaro lives in the Washington, D.C. area and works for CareNet, a national nonprofit organization that runs pregnancy centers and churches throughout the U.S.

“In addition to being here for my job, I’m also here because … I just want to support the march and support the idea of abundant life,” he said.

Dicaro is optimistic about what the outcome of the Dobbs case will be.

“Christ, in John 10:10, says, ‘I came that they may have life and have it abundantly.’ So, because Jesus was pro-abundant life, we are too. So, we don’t want to just save babies from abortion, we actually want to also make sure that … they’re raising good strong families and have an opportunity to become disciples of Jesus Christ, and that’s what abundant life looks like, not just life.”