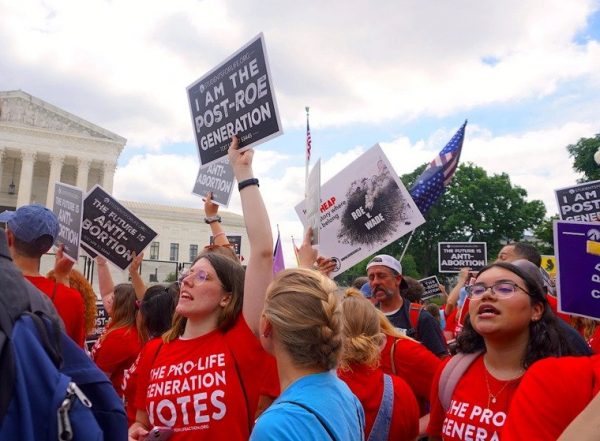 Following the U.S. Supreme Court’s decision in Dobbs v. Jackson Women’s Health Organization declaring that the Constitution does not contain a right to an abortion, activists on both sides of the contentious debate gathered outside the Supreme Court to react to the ruling.

The Supreme Court handed down the Dobbs decision Friday morning, overturning the 1973 Roe v. Wade decision that legalized abortion nationwide. The announcement of the Dobbs decision comes less than two months after Politico published a leaked draft opinion in the case indicating that a majority of justices were poised to overturn Roe.

Soon after the release of the Dobbs decision, activists on both sides of the abortion debate gathered outside the Supreme Court to either celebrate or decry the decision, depending on their position on the issue. The sidewalk directly in front of the government building was fenced off due to concerns of violence breaking out in response to the expected ruling on the polarizing issue of abortion.

Brooke Paz, the director of government affairs for the pro-life organization, told The Christian Post that she was “amazed” and “incredibly relieved” by the decision.

“The moment that Kristan Hawkins, president of Students for Life, read the decision, we just all burst into tears,” she recalled. “Even though we figured this would happen with the leak, now that it’s real, it’s reality, it’s incredible, it feels amazing.”

Paz insisted that “this is only the beginning for us,” adding: “We’re celebrating today but we’re going to continue working tomorrow and every day after that.” Going forward, Students for Life of America will “continue working in the states and on the federal level to pass as many life-affirming legislation as we can.”

The activist identified bans on chemical abortions and “heartbeat bills” that ban abortions after a fetal heartbeat can be detected at both the state and federal level as the focus of the pro-life movement going forward.